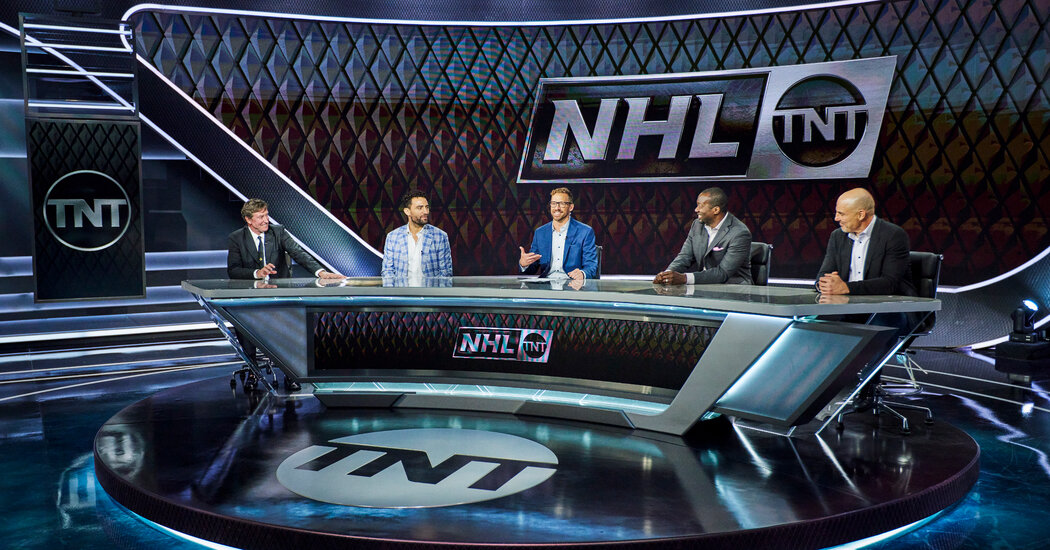 ATLANTA — Without fail, Anson Carter’s face hurts from laughing each week while filming “The NHL on TNT.” It started the first week, when the crew cracked jokes until a few seconds before the red light flashed and Wayne Gretzky interrupted the banter to ask, “What are we talking about now?”

Even the Great One is not immune from the chirping, as the crew calls it in hockey slang. On set, he is the new one. His lifetime Gucci tab, eternal devotion to sweater vests or even when he will appear on set again can all be points of discussion for dissection, roasts and jokes.

“It’s kind of like being a rookie your first game,” Gretzky said of his first night in studio. “You don’t want to make any mistakes. So, I just felt like I’m going to follow their lead and I’m going to be the guy that kind of plays off of them.”

Carter, the veteran analyst who played 10 years in the N.H.L., offered Gretzky some advice after one of their first tapings. “Do you ever go into a game saying, ‘I only want one point tonight and I’m going to take it easy?’ or do you go in thinking, I’m a savage. I’m getting five or six points?”

Turner Sports’ exploration into hockey remains in the early stages after WarnerMedia reached a $1.575 billion, seven-year deal to split the television rights for the N.H.L. with ESPN following NBC Sports’ longtime run as the national carrier in the United States. The networks are making a large and lucrative bet that fans will continue to watch live professional sports and that hockey remains an untapped source of interest in the U.S. Turner Sports holds the rights to televise up to 72 national games each season of the agreement, including the annual Winter Classic around New Year’s Day, half the playoffs and every other Stanley Cup finals starting in 2023.

For Craig Barry, the executive vice president and chief content officer for Turner Sports, the network’s first priority is not necessarily growing the audience. They know the devoted hockey fan will tune in. The goal is to expand and improve the experience of watching the sport by using smart technology, showing different points of access, and presenting the game more authentically — like faster, sharper cuts and better camera angles — similar to how it is presented on television in Canada.

The network is aiming for hockey and culture to intersect inside the studio show where the analysts Carter, Gretzky, Rick Tocchet and Paul Bissonnette join the host Liam McHugh. Convincing Gretzky, arguably the game’s most celebrated player, to join was no small feat. Gretzky said his family had recently relocated to Missouri from California, which made taking regular treks to Atlanta more manageable.

“I had a tremendous scenario in Edmonton where I was with the Oilers for the last few years and loved every minute of it, and really didn’t have the stress and pressure of being in the trenches every day,” said Gretzky, who had been a partner and vice chairman for the Oilers before resigning in May. “And so when this came along, it’s an opportunity to still be around the game. And I watched every game every night for years. It’s been fun and exciting and yeah, I can see myself doing it for a while.”

The easy formula for Turner to replicate would be its popular “Inside the NBA” studio show, shot in nearby Studio J. But the personalities of Charles Barkley, Ernie Johnson, Shaquille O’Neal and Kenny Smith have been syncing for years.

The N.H.L. staff is attempting to create a show that can stand on its own with a chemistry felt from the beginning, thanks in large part to Tara August, the vice president of talent relations at Turner Sports, charged with putting together the crew in a few short months.

On a recent night, the staff looked to congratulate Tocchet on his recent induction into the Philadelphia Flyers’ Hall of Fame. First, David Gibson, the producer, shared a statistic he had unearthed during the show’s production meeting among a couple dozen staff members.

“All-time leading penalty minutes for Philly,” Gibson said. “Something to be proud of. A lot of bullies over the years.”

Someone asked if any partitions used as a precaution against Covid-19 remained in the studios so a makeshift penalty box could surround Tocchet on air during the segment. Laughter ensued, a plan hatched, and less than two hours later, a surprised and game Tocchet found himself enclosed in plexiglass throughout most of the show.

McHugh, a former NBC Sports host and the only member of the on-air crew present for the production meeting, quickly agreed to the bit. As the host, he steers the topics, while allowing the analysts to react on the spot.

“Basically, there’s a lesson for kids here,’ McHugh joked. “Don’t prep and you too, can be on national TV.”

For more serious topics, he will offer a heads up on points of discussion. Already, the crew has covered heavier notes like the racist taunt aimed at Jalen Smereck, a Black player, during a game in the Ukrainian Hockey League, the overdose death of the former N.H.L. player Jimmy Hayes and the allegations of sexual assault brought by Kyle Beach while he played for the Chicago Blackhawks.

Before Tocchet was introduced to his homemade penalty box, the on-air talent, minus Gretzky, met to discuss their performance to date.

“And when it comes to maybe a guy who doesn’t play much and fills up water bottles, maybe I can comment on that,” Bissonnette said. “I look at that like that guy’s stepping up for the team because we had to tackle that and we didn’t really have to follow it up. And then we moved on and then got to talking about hockey because that’s actually what we want to do, right? It was unfortunate that we had to talk about it, but we don’t want to shy away from those things.”

“Yeah, but it was no different, Biz, than you talking about Jimmy Hayes,” Carter said.

Even Gibson, the producer, does not know all that will transpire. Bissonnette is the show’s wild card.

“There’s that slight pause in what you’re going to say because you have to put it through the filter; whereas if it’s like on the podcast, if it slips out, you can always edit it out or you can actually drop an F bomb here and there,” he said.

To Gibson and everyone’s surprise, Bissonnette recently dropped an expletive on live television.

“I don’t think that’s bad, especially for TNT,” he said. “I’m sure much worse has been said.”

“Well, it was one of those, I was grinning at you because it’s, well the sentiments, I totally agree with but …” McHugh said.

Bissonnette interrupted: “You must not listen to the podcast enough because there’s a lot worse being said on there.”

Which brought the group back to the absent Gretzky.

“Gretzky came out, he’s the greatest player in the world but Gretzky got chirped first show,” McHugh said.

“Right away,” Bissonnette said. “Everyone licking their chops. Couldn’t wait.”

“That’s Wayne’s personality though,” Tocchet said. “I’ve coached with him, I played with him. Everyone’s scared of him. So, you’re in the locker room for a game and he’ll always wanted some guy to chirp him.”

Gretzky, scheduled for a limited number of on-air appearances, immediately worked to fit in with the team. Before the season, McHugh received a call out the blue. His eyes lit up and his wife asked him who the caller was. “It was Wayne Gretzky,” he said. “He was recommending an eye doctor.”

“He wants to provide entertainment for the hockey world,” Bissonnette said. “I think he feels indebted to it for what it’s provided him. I know if I was him, I’d probably be on a beach somewhere and you’d never see me.”

Gretzky plans to return to the show at the Winter Classic and be involved in the playoff run. Turner Sports is researching ways to use Gretzky’s expertise with new technology. And the network is hoping that an eager hockey audience will watch on Wednesday nights and, in the spring, Sunday afternoons.