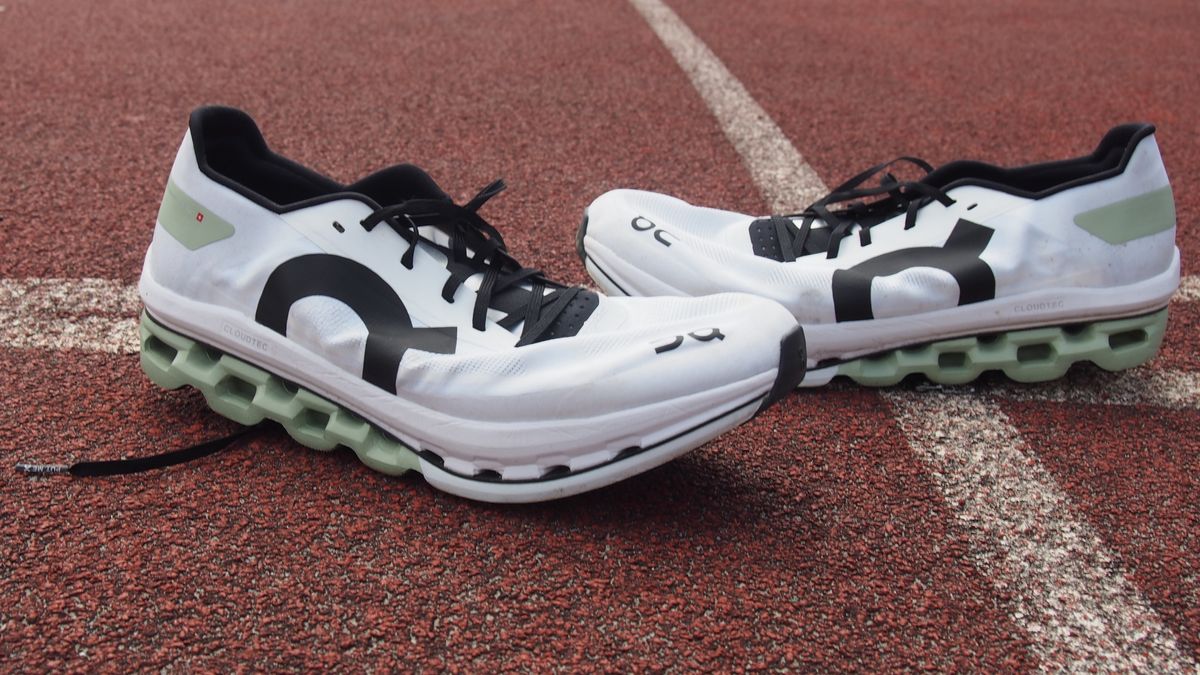 The On CloudBoom Echo is the carbon plate racing shoe follow-up to the Swiss brand’s Cloudboom shoe, which launched in 2020.

With the Echo, On’s still seeking to give Nike and the likes of Adidas and Asics a run for their money with a shoe that’s built for road running and one that it says you can take onto the start line of anywhere from 10k up to a full marathon.

Like its predecessor, it still has a carbon fiber infused Speedboard that runs the length of the shoe but has been tweaked to improve the explosive, forward propulsion feeling. That’s matched up with a double layer of On’s CloudTec cushioning that combined is designed to a offer less firm ride than the first Cloudboom.

The upper is made from 100% recycled engineered mesh with the rubber outsole design tweaked the patterning to help it hold up even when you’re upping the pace on wet roads.

It’s also dropped a few grams in weight, but sticks to the same 9mm heel-to-toe drop and comes in the same white on black colourway for the men’s and women’s version of the shoe.

While still a little firmer than racing shoes from Nike, Asics and Adidas, the Cloudboom Echo feels like a better fit for going longer than the first Cloudboom and is one best saved for race day and speed sessions where you’re working at building that ideal race pace.

The Cloudboom Echo is available in just the white on black colorway with splashes of green at the heel and the bottom of the upper. It’s a typically stylish looking On shoe and one that’s definitely going to be a better fit for those with narrow feet. On says it fits true to size and we’d say our UK size 8 was a good fit for our narrow feet with decent space up front in the toe box to allow for some wiggle room.

Weight-wise, our size 8 Echo weighed in at 225g, putting it around the same weight as the Alphafly but not quite as light as the Asics Metaspeed Sky, which comes in under 200g. It’s still a nicely weighted shoe, thanks largely in part to the thin, almost paper-like feeling mesh upper, which On says has been made from 100% recycled polyester. The tongue is thin and spreads itself across the top of the foot and doesn’t budge once you get moving. The flat laces are great for getting a nice locked in feel, though can be a bit fiddly to untie if you go really tight with that lacing.

In terms of the key shoe specs, the Echo has the same 9mm heel-to-toe drop as the first Cloudboom but has moved to a higher 27mm stack height in the forefoot and 35mm in the heel. It’s still not quite as stacked as the Alphafly, Vaporfly 2 or the Saucony Endorphin Pro, but it does mean it can offer a more cushioned and protected ride than the original Cloudboom.

On’s signature CloudTec technology is still in place, and it’s a double layer of those pods used to offer that cushioning and responsiveness. A carbon fiber infused Speedboard is there too that has a more aggressive design that coupled with its CloudTec cushioning is designed to propel you forward and offer more efficiency than other racing shoes.

The outsole has been beefed up in the forefoot and the specific areas in the heel that are meant to improve traction on wet surfaces, but also offer something more stable when you’re hitting bends or twists in a course or route.

With over 50km in this shoe covering short 5km runs, interval track sessions and some longer training runs two things become clear with the Cloudboom Echo. It’s a much more pleasurable experience running in than that first Cludboom and it’s one that’s best enjoyed running at your fastest. It doesn’t have the versatility to be used for easy miles or as a daily running shoe simply because it’s just not built for that.

The big change here is that the Echo feels noticeably less firm than the Cloudboom, which made it okay for shorter distances, but a tough one to want to go back out and run longer training runs in. Now On has a shoe that you’ll want to run further with.

The shoe is pleasingly light and the upper that feels like barely an upper is cool and breathable to wear in hot running conditions. The combination of the dual-layer Cloudtec cushioning and more curved Speedboard now feels more complimentary than it did previously and that’s kudos to On for recognizing it needed to do some tweaking here.

The Echo felt most rewarding at six minute/mile or quicker speeds, where you can engage that softer-feeling midsole cushioning and the more curved Speedboard that has the noticeable feeling of trying to push you forward. It felt great in interval track sessions and if you can maintain that pace over long distances, it doesn’t feel hugely taxing on the legs once you’re done. We’d personally still side with slightly softer cushioning like you’ll find on something from Asics or Saucony, but if you prefer something a little firmer for longer distances, then the Echo is going to appeal.

The traction on the outsole was great too, even in pretty treacherous rainy conditions. There was no slipping and sliding and while that upper looks like it’s fit to soak through, it didn’t leave our feet in a big wet mess.

The Cloudboom Echo is more of the shoe we thought the Cloudboom would be. It’s nice to run quickly in, you feel nimble and stable in it and it’s a fit that definitely feels best for those with more narrow feet. It’s not a do-it-all shoe and as we said, some might favour something a little softer in the cushioning department.

If you want something with a nice, light upper and something to go fast at moderate to long distances, there’s plenty to like here. If you can live without that firmer feel and want to spend less, you could look at the Saucony Endorphin Pro or the Hoka Carbon X2 instead.

You want something to run fast inThe Cloudboom Echo is one to save running fast in, so if you want a dedicated shoe in your rotation to do that, then this does fit the bill.

You like a firmer ride for longer distancesOn’s cushioning tech is more comfortable on the Boom than it was on the first Cloudboom, but it’s still a firmer feeling than other racing shoes out there.

You want a good looking running shoeIf you obsess as much about looks as you are performance, On make some stylish running shoes and that doesn’t change with the Cloudboom Echo.

You have wider feetOn says the Cloudboom Echo fits true to size, but we’d definitely err on the side of caution if you have wider than average feet.

You want a do-it-all shoeAs we said, the Cloudboom Echo is just for running quickly, so it’s not one to grab for slow, easy miles or to be a go-to daily shoe.