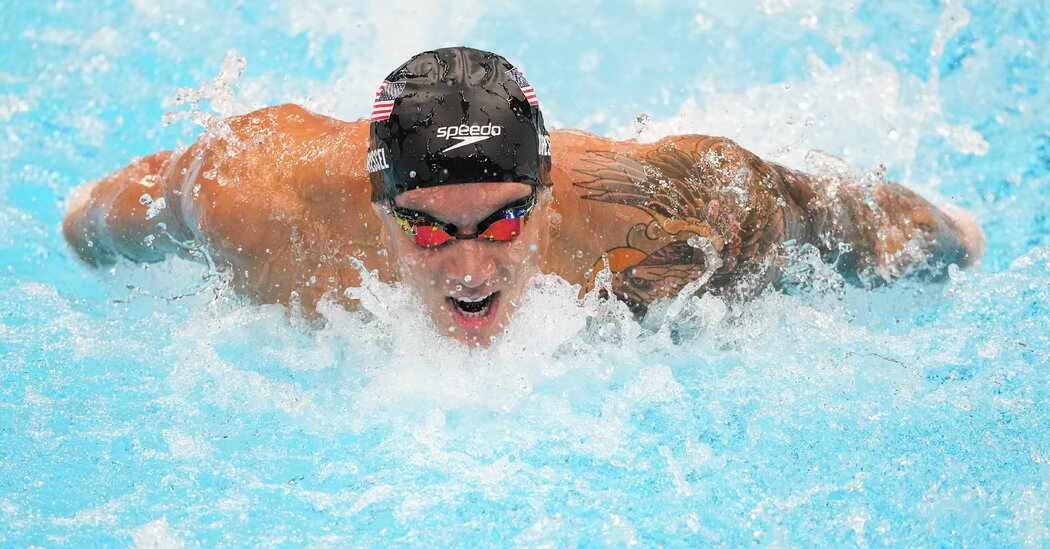 Caeleb Dressel of the United States won his third gold medal of these Olympics, setting a world record in the 100-meter butterfly with a time of 49.45

Dressel’s family and friends are at a watch party at the Universal Orlando Resort.

Katie Ledecky holds the Olympic and world record in the 800-meter freestyle, established at the 2016 Rio de Janeiro Olympics. Back then, she swam it in a blistering 8:04.79, winning by nearly 12 seconds. It was the last of her four gold medals, to go with one silver.

But this is a different Ledecky and a different time. She remains the slight favorite, and her qualifying time of 8:15.67 would have still won in Brazil five years ago. But she is unlikely to swim away from the competition this time. Her biggest challenge may come from the teammate next to her, 15-year-old Katie Grimes.

Anything other than a Ledecky win would be an upset. She has not lost a major final in this event since she emerged as a 15-year-old. She owns 24 of the 25 fastest times in history. If she goes under 8:14.10, she will have all 25.

Whatever rivalry that Ledecky has with Australia’s Ariarne Titmus will be highlighted here. Titmus’s two gold medals came by beating Ledecky in two other individual events here, the 200 free (where Ledecky was fifth) and the 400 free (Ledecky earned silver, missing gold by 0.67 seconds).

The longer the distance, though, the more it favors Ledecky. Titmus will swim in Lane 7, and will have plenty of others to fight to get to the medal stand.

There is something missing from the 200-meter backstroke final: the world-record holder, Regan Smith, who did not qualify because she finished third at the U.S. trials. It is indicative of American depth, in this event and across the sport.

The two athletes who beat her in June — Rhyan White and Phoebe Bacon — are in position to medal here. But the pool will be filled with swimmers who feel the same way, across every lane.

Expect a tight finish. The fastest qualifying time, barely, went to Emily Seebohm of Australia. She will be sandwiched by White and Bacon, two of the four swimmers whose qualifying times were within a second of Seebohm. The other woman to watch is Australia’s Kaylee McKeown, who won the 100 fly.

(As for Smith, she finished her schedule, leaving Tokyo with a silver medal and a bronze medal.)

Caeleb Dressel could win his third gold medal of these Olympics. He holds the world record (49.5, in 2019) and the Olympic record (49.71, Friday) in the 100-meter butterfly, and no one else in the field went below 50 seconds in their heats.

But Kristof Milak of Hungary, the gold medalist in the 200 fly, will be swimming to Dressel’s left. The two of them, and Michael Phelps and Milorad Cavic, are the only ones to swim sub-50 seconds in this event.

Dressel is the men’s breakout star of swimming at these Olympics, and the exclamation points could come on each weekend day. Within an hour of swimming the 100 fly, he will compete in a semifinal heat of the 50 free. That final is Sunday morning, Tokyo time (Saturday night in the U.S.).

Dressel started swimming when he was 5, after his parents enrolled him in swim lessons — a decision he did not agree with at first, he said in a video interview on U.S.A. Swimming’s YouTube page.

But Dressel, who is from Green Cove Springs, Fla., eventually became laser-focused on swimming. By his mother’s telling, Dressel’s first “competition” came when he jumped in the pool during one of his siblings’ swim meets, raced his way to the other end and claimed, “I won a medal, I won a medal!”

It was the first unofficial accomplishment in his booming career: Dressel, who swam for the University of Florida, went on to sweep up 15 medals at world championships and set world and U.S. records.

At the 2019 FINA World Championship Games, Dressel broke his first long-course world record in the 100-meter butterfly, posting a time of 49.50 and shattering the previous record of 49.82 set by Michael Phelps.

Dressel made his Olympic debut at the 2016 Games in Rio de Janeiro, where he and his team won gold in the men’s 4×100 freestyle and in the 4×100 medley relays.

The Tokyo Aquatics Center was newly built for the Olympics, like most of the venues for these Summer Games. The swimming pool will host national and international meets, Japanese officials say, once the Olympics are over. Here’s what you need to know:

How many lanes are there?

The center includes a 10-lane main pool, a training pool and a diving pool. For races, only the inside eight lanes are utilized. All the swimming, diving and artistic swimming events are held there. Next month, it will host the Paralympic swimming competitions.

What is the size of the pool?

The main pool is 50 meters (164 feet) long and 25 meters (82 feet) wide. And it is 3 meters deep, or about 9.8 feet. The main pool and the warm-up pool also have movable floors and walls and have adapting depth options.

How warm is the water?

The temperature is kept between 25 and 28 degrees Celsius, which is between 77 and 82.4 degrees Fahrenheit.

Is there a lifeguard at the pool?

Yes, lifeguards keep close watch on the swimmers, who could require aid from injuries and cramps. They’re also on hand for other contests: Water polo games are very physical; artistic swimming has seen many concussions in the past; and divers are launching themselves from towering heights.

Why do air horns go off during the races?

Air horns are usually used to remind swimmers that they’re on their final lap.

TOKYO — Swimming today (Saturday morning in Tokyo, Friday night in the U.S.) presents the second-to-last day of the competition, the last race for Katie Ledecky and another chance for Caeleb Dressel to win gold.

The United States has 24 medals, 10 more than any other country. (That would be Australia, with 14, followed by Britain, with six.) If there is disappointment among Americans, it is that they are showing depth more than dominance. Only — only being relative — six of the 24 medals are gold.

The session will have four finals, including three in a row to start: men’s 100-meter butterfly, women’s 200 backstroke and women’s 800 freestyle. That is the one that Ledecky will swim, looking to add to her Tokyo haul of a gold medal and two silvers. She is heavily favored to win gold here, but Ariarne Titmus of Australia has been a threat in other races.

Dressel could win his third gold medal of these Olympics. He holds the world record (49.5, in 2019) and the Olympic record (49.71, Friday), and no one else in the field went below 50 seconds in their heats.

And two Americans could boost the medal haul in the women’s 200 backstroke. The biggest question is what color the medals will be.

The final event is the mixed 4×100 medley, the first mixed-gender swimming race at the Olympics.

On Friday, American Ryan Murphy added further intrigue to the final days of the meet by mentioning the “d” word (doping) after finishing second to a Russian in one race and two Russians in another. Russian athletes are allowed to compete if they meet antidoping protocols laid out by meet organizers.

“I try not to get caught up in that,” he said, without directly accusing the winners of cheating. “It is a huge mental drain on me to go throughout the year knowing that I’m in a race that probably isn’t clean.”

The Russian Olympic Committee (going by ROC at these Games) responded on Twitter as if swimming had entered a cold war in the water.

“How unnerving our victories are for some of our colleagues,” it said, in Russian. “Yes, we are here at the Olympics, whether someone likes it or not.”

It showed photographs of three athletes who have openly, but not harshly, questioned Russia’s presence here — Murphy, British swimmer Luke Greenback, and American rower Megan Kalmoe — and called it “English-language propaganda” from “athletes offended by defeats.”

TOKYO — American dominance in the Olympic pool is an old story at this point, a snowball forever rolling downhill, even if the pitch of the slope varies slightly from year to year.

The United States team’s grinding success continued Friday, with American swimmers adding two silvers and a bronze to their growing haul at the Tokyo Games. The medals widened the U.S. advantage on its rivals in the pool but fell short of the golds they covet most of all, a development that had one American claiming his race was tainted by doping.

Ryan Murphy won a silver in the men’s 200-meter backstroke and then caused some fireworks in his news conference when he questioned whether his race, won by a Russian, was drug-free, given Russia’s history of doping in sports.

“I don’t know if it was 100 percent clean,” Murphy said, “and that’s because of things that have happened in the past.”

Earlier, Lilly King and Annie Lazor earned silver and bronze in the women’s 200-meter breaststroke, beaten to the wall by a South African, Tatjana Schoenmaker, who set a world record in the event and then burst into tears.

Americans now have captured 24 swimming medals overall heading into the final two days of competition, compared with 14 for their biggest rival, swimming-mad Australia. The United States most likely will not match its high-water mark of 2016, when the team won 34 medals, 16 of them gold, but it should get within spitting distance of that total.

More gold medals are up for grabs today, in the 100-meter men’s butterfly (Caelab Dressel of the U.S. is favored), the women’s 200-meter backstroke (two Americans were the top qualifiers), the women’s 800-meter freestyle (can Katie Ledecky of the U.S. claim another distance gold?) and the 4×100-meter mixed gender medley relay (first time for this even in the Olympics).

The Australians could have a strong night, too, with Ariarne Titmus expected to challenge Ledecky in the 800-meter freestyle.

The scheduled times of the medal events are:

NBC’s coverage can also be streamed on NBCOlympics.com and on its Peacock service.