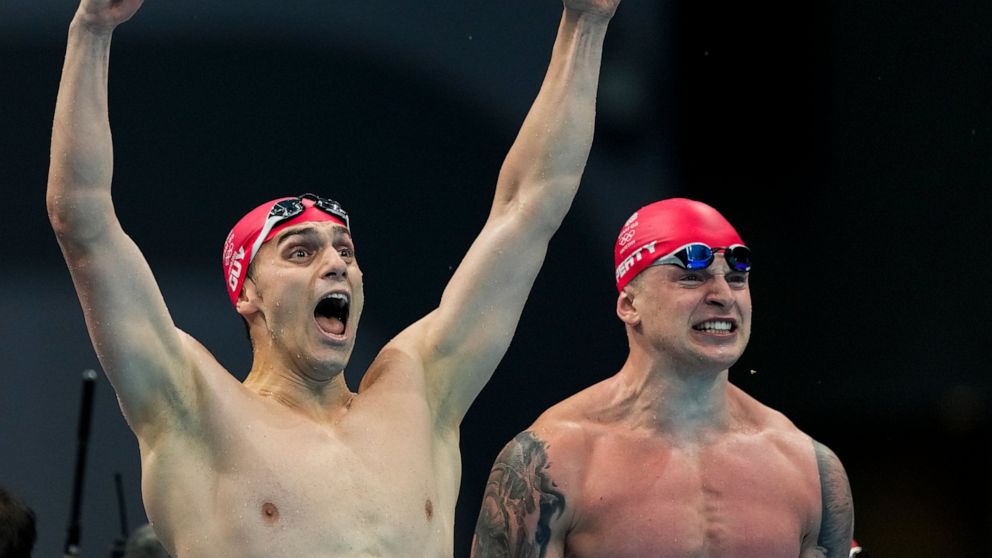 Hannah Roberts will have the top seed when BMX freestyle makes its Olympic finals debut.

The 19-year-old from Indiana had a two-run seeding average of 87.70 to lead American teammate Perris Benegas by 1.2 heading into Sunday’s finals.

Gold medal favorite Logan Martin of Australia led the men’s qualifying with a 90.97 average. Rim Nakamura of Japan was second at 87.67.

Riders will get two one-minute runs in the final and scoring will be the average of the two.

American BMX racer Connor Fields has been moved out of critical care unit at St. Luke’s International hospital a day after suffering a brain hemorrhage during a horrific qualifying crash at the Tokyo Olympics.

Fields was injured during his third qualifying run when he slammed into the first turn and was hit by two other riders. The 28-year-old from Las Vegas was taken by stretcher to an ambulance.

USA Cycling says Fields spent the night in the ICU and doctors reported no additional bleeding or injuries.

USA Cycling staff have been in contact with his family to navigate his care options. Fields will remain in the hospital until cleared.

Japanese judo gold medalist Shohei Ono has lost his first bout since 2015 in the quarterfinals of the Olympic debut of the mixed team competition.

Ono was stunned by Germany’s Igor Wandtke in the second bout of the six-match quarterfinal. Wandtke fought very defensively and incurred two penalties, but then threw Ono for a stunning waza ari with 16 seconds left.

But Japan’s lineup contained five gold medalists, and the next four players won their bouts to send Japan into the semifinals. Aaron Wolf finished Johannes Frey early in golden score for the clinching fourth victory.

Britain has claimed swimming gold in the new 4x100m mixed medley relay with a world record of 3 minutes, 37.58 seconds.

The relay is a new event where men and women compete together and it can be hard to tell who’s winning.

His hopes were snuffed out before he even dove in the pool.

The Americans tried a different strategy than everyone else, going with Dressel on the freestyle while the other seven teams all closed with a woman.

When 18-year-old Torri Huske passed off to Dressel after the butterfly leg, the Americans were more than 7 seconds behind the leaders in last place.

Dressel turned in the fastest time, but it wasn’t nearly enough to chase down all the teams ahead of him.

Simone Manuel’s Olympics are over.

The American swimmer failed to advance from the semifinals of the 50-meter freestyle. Her time of 24.63 seconds was 11th-fastest, eliminating her from Sunday’s final. Only the top eight advance.

At the 2016 Rio Games, Manuel became the first Black American woman to win an individual swimming gold medal in the 100 freestyle. She also claimed a silver in the 50 free.

This time, her preparations were hampered by overtraining syndrome. She failed to make the U.S. team in the 100 free, leaving the 50 as her only individual event. She did claim a bronze medal in the 4×100 free relay.

Australia’s Emma McKeon was the top qualifier, setting an Olympic record for the second day in a row with a time of 24.00.

Just minutes after collecting his gold medal for a world-record victory in the 100 butterfly, Dressel returned to the deck for the semifinals of the 50 freestyle.

He posted the top qualifying time of 21.42 seconds, sending him to Sunday’s final with a chance to win another gold.

And Dressel still has one more race to go on the next-to-last day of swimming. He’ll anchor the United States in the 4×100 mixed medley relay, a new Olympic event featuring two men and two women.

He’ll be the only man to swim the anchor freestyle leg, which means he’ll surely dive into the pool with a hefty deficit to make up on the women anchoring for the other seven teams.

Katie Ledecky has closed out her Tokyo Olympics with another gold medal.

Ledecky became the first female swimmer to capture six individual gold medals in her career with a victory in the 800-meter freestyle.

Ledecky led all the way in a race she hasn’t lost since 2010. But she was pushed hard by Australian rival Ariarne Titmus, who claimed the silver in 8:13.83.

Ledecky finished the Tokyo Games with two golds, two silvers and a fifth-place finish in the 200 free. She lost her first two individual matchups with Titmus, but finally beat her in the 800.

USA Gymnastics says Simone Biles has decided to withdraw from the Olympic event finals in the vault and uneven bars.

She continues to be evaluated daily to determine whether she’ll compete in the finals for floor exercise and balance beam.

Biles said she was putting her mental health first when she withdrew from the gymnastics team event after one rotation. The U.S. women won silver there. She also decided not to compete in the all-around. American Sunisa Lee won gold in that event.

MyKayla Skinner, who had the fourth highest score in vault during qualifications, will compete in vault finals for the U.S. alongside Jade Carey, who finished with the second highest score. Biles was the defending Olympic champion in the vault.

The Australian women have claimed another gold at the Olympic pool.

Kaylee McKeown completed a sweep of the backstroke events with a victory in the 200-meter butterfly. Her winning time was 2 minutes, 4.68 seconds.

American Caeleb Dressel has won his third gold medal of the Tokyo Olympics with a world record in the 100-meter butterfly.

Dressel led right from the start and held off Hungary’s Kristof Milak to win in 49.45 seconds, breaking the mark of 49.50 that he set two years ago at the 2019 world championships.

Milak, winner of the 200-meter butterfly, earned the silver with a blistering 49.68. The bronze went to Switzerland’s Noe Ponti.

Dressel’s victory came in the first of three races on his morning schedule. He’ll also compete in the semifinals of the 50 freestyle before returning to the deck one more time to anchor the 4×100 mixed medley relay, a new Olympic event that features two men and two women.

He’ll likely dive into the pool with a big deficit since he’s the only man in the field to swim the freestyle leg.

American Caeleb Dressel will be the lone male anchor on the freestyle leg in the 4×100-meter mixed medley relay final. The event is making its Olympic debut in Tokyo.

The U.S. team will consist of Ryan Murphy, Lydia Jacoby, Torri Huske and Dressel, with the Americans swapping out all of their swimmers who competed in the preliminaries.

As the only team with a man swimming the final leg, the Americans will be facing a deficit going into the last 100 meters. They’ll leave it to Dressel to overhaul the field in a bid for gold.

ROC, Italy and China are going with the traditional order of two men and then two women. Britain, Australia, the Netherlands and Israel are going with a woman, two men swimming the middle legs and a woman on the anchor leg.

Great Britain has won gold in the triathlon mixed relay, making it the winningest national team in the history of the sport.

The U.S. took silver and France claimed bronze in the mixed relay at Odaiba Marine Park.

Taylor-Brown and Yee both also medaled in the individual contests earlier in the week, bringing home silver in the women’s and men’s events, respectively.

Hong Kong’s rising star Siobhán Haughey has withdrawn from the semifinals of the 50-meter freestyle at the Olympics because of a hip injury.

The 23-year-old swimmer earned a silver medal in the 100-meter freestyle on Friday, to go with the silver she won in the 200 free two days earlier. They are the first swimming medals won by Hong Kong.

Her coach, Rick Bishop, said the injury first bothered her during the 100 free, but she kept going. She finished 15th in the 50 free preliminaries.

Hong Kong was cheering her on, excited to see success for the first time at the Olympic pool. Her two silvers are among six medals won by the country since it first competed in the Summer Games in 1952.

Nigerian sprinter Blessing Okagbare has been provisionally suspended after a positive test for human growth hormone. She was due to run in the semifinals of the women’s 100 meters at the Olympics on Saturday.

The Athletics Integrity Unit said Okagbare tested positive in an out-of-competition test on July 19. The AIU says it was only informed of the finding on Friday, after Okagbare had already run in the 100-meter heats at the Tokyo Games.

The AIU informed Okagbare of the finding and her provisional suspension on Saturday morning.

Okagbare won her heat in 11.05 seconds at the Olympic Stadium to progress to the semis.