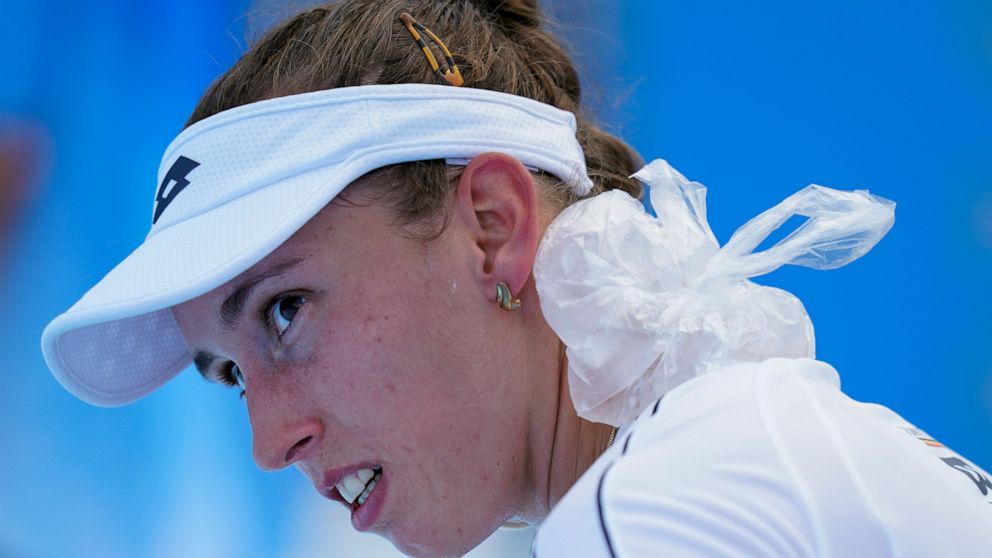 China has captured the first diving gold medal of the Tokyo Olympics.

Shi Tingmao and Wang Han romped to victory in the women’s 3-meter synchronized springboard event with 326.40 points, starting what is expected to be another dominating performance by Chinese divers at these games. They have won 37 of 48 gold medals at the last seven Olympics.

Jennifer Abel and Melissa Citrini-Beaulieu of Canada took the silver at 300.78. The bronze went to Germany’s Lena Hentschel and Tina Punzel with 284.97.

The Chinese women have not lost an Olympic diving event since 2004. This is their fifth straight victory in the synchronized springboard, their only loss coming when the event debuted at the 2000 Sydney Games.

Shi won her second straight gold in the synchro. She teamed with Wu Minxia to capture gold in Rio de Janeiro five years ago.

The United States duo of Alison Gibson and Krysta Palmer finished last in the eight-team field.

MORE ON THE TOKYO GAMES:

— An Iranian defector beat an Iranian opponent in taekwondo, then upset a two-time gold medalist

The IOC is urging Olympic medalists to curb their hugs and keep masks on while on the podium.

Medalists in some swimming events Sunday morning were hugging, sharing the podium top step for photographs and taking their masks off for a time.

Those are potential breaches of rules protecting the Olympics from COVID-19 infections.

IOC spokesman Mark Adams says “we feel for the athletes (but) there are things that unfortunately we have had to make stricter.”

Adams adds “we would urge and ask everyone to obey the rules.”

Tokyo organizers have reported 127 games-related COVID-19 cases, including 14 athletes, in Japan this month.

An Iranian defector who competes in taekwondo is one victory away from winning the Refugee Olympic Team’s first ever medal.

Kimia Alizadeh rallied in the final minute for a 9-8 quarterfinal victory over Zhou Lijun of China in the 57-kilogram women’s division, putting her into her first Olympic semifinal.

Alizadeh, who won her bronze at the Rio Games through repechage, was the first woman to win an Olympic medal for Iran. She subsequently left Iran for Germany last year, citing institutional sexism and frustration with being used for propaganda purposes.

Officials say the expected weather could create unrowable conditions and have rescheduled several events to Wednesday or later. A similar forecast for Monday had forced the Games to move that day’s events to Sunday.

Naomi Osaka made quick work of her first match in nearly two months.

The Japanese superstar who lit the Olympic cauldron eased past 52nd-ranked Zheng Saisai of China 6-1, 6-4 in the first round of the tennis tournament at the Tokyo Games.

It was Osaka’s first match since she withdrew from the French Open and sat out Wimbledon to take a mental health break while revealing she has dealt with depression.

Osaka’s match was originally scheduled to open the tournament on Saturday but then was moved to Sunday before her starring role in Friday’s opening ceremony.

Japan’s Yuto Horigome has won the first-ever skateboarding competition at the Olympic Games, taking gold in men’s street in the city where he learned to skate as a kid and where his sport is often frowned upon.

The first ever skateboarding silver went to Brazilian Kelvin Hoefler, who used to sleep with his board when he fell in love with skating as a kid.

American skater Jagger Eaton took bronze, the Arizonan adapting best among the Americans to the heat at the Ariake Urban Sports Park in Tokyo.

One of skateboarding’s biggest stars, Nyjah Huston from the U.S., fell repeatedly trying to land tricks and placed 7th in the eight-man final.

The International Tennis Federation is giving Olympics players extra time during breaks in play after facing criticism for staging matches during the highest heat of the day.

The federation says change of ends and set breaks have been extended by an extra 30 seconds and will now be one minute, 30 seconds.

Second-seeded Daniil Medvedev had asked for longer breaks to bring the Olympics into line with regular tour events.

The federation says it will consider suspending play if temperatures keep rising.

Top-seeded Novak Djokovic and Medvedev both questioned why matches Saturday were not moved into an evening session.

Iranian defector Kimia Alizadeh has shocked two-time Olympic gold medalist Jade Jones at the Tokyo Games, beating the British champion 16-12 in the round of 16.

Alizadeh, a bronze medalist in Rio de Janeiro, won twice for the Refugee Olympic Team to advance to the Tokyo quarterfinals.

She beat Iranian opponent Nahid Kiyani Chandeh in her opening bout before her massive upset of Jones, who was attempting to become the first three-time Olympic taekwondo gold medalist.

Alizadeh is competing for the Refugee Team after defecting to Germany shortly after becoming the first Iranian women to win an Olympic medal in 2016.

Top-ranked Ash Barty has been upset by 48th-ranked Spanish opponent Sara Sorribes Tormo 6-4, 6-3 in the first round of the Tokyo tennis tournament.

It was Barty’s Olympic singles debut. She won a doubles match with Australian teammate Storm Sanders on Saturday.

The U.S. women’s volleyball team’s quest for its first gold medal ever is off to a fast start.

But they are still aiming for that elusive first gold medal in the sport and figure to be one of the top contenders in Tokyo along with China.

Jordan Thompson led the way in the opener with 20 points as she dominated at the net.

Organizers did not immediately say why the British player pulled out shortly ahead of his scheduled opener against ninth-seeded Felix Auger-Aliassime of Canada on Center Court.

Max Purcell of Australia will play Auger-Aliassime instead.

Murray has a total of three Olympic medals. He also won a silver in mixed doubles at the 2012 London Games with Laura Robson.

Australia has set the first swimming world record of the Tokyo Games in the women’s 4x-100-meter freestyle relay.

The winning team included sisters Bronte and Cate Campbell, who took the lead and anchor legs.

They were joined by Meg Harris and Emma McKeon.

Canada was second in 3:32.78, while the American took their sixth medal of the night with a bronze in 3:32.81. Simone Manuel swam the anchor leg for the U.S.

Georgia’s Nina Salukvadze made history by becoming the first athlete to compete in nine Olympics and announced her retirement to Russian media after failing to qualify for the finals.

Bryson DeChambeau has tested positive for COVID-19 before leaving the United States for Tokyo and will miss the Olympics. He’ll be replaced by Patrick Reed.

DeChambeau, last year’s U.S. Open champion, becomes the highest-profile athlete to test positive for the virus. He says he is “deeply disappointed not to be able to compete in the Olympics for Team USA.”

Reed was scheduled to undergo testing Sunday and Monday to clear himself to compete in Tokyo. The the first round at the Kasumigaseki Country Club is set for Thursday. Reed, the 2018 Masters champion, is now the only two-time Olympian in the sport, which was reintroduced to the program in 2016.

Yui Ohashi has given Japan its first swimming gold medal at the Tokyo Aquatics Centre.

With a dazzling breaststroke leg, Ohashi romped to victory in the women’s 400-meter individual medley, touching first in 4 minutes, 32.08 seconds.

Her performance made up for the disappointment of the previous night, when gold medal favorite Daiya Seto didn’t advance to the final of the men’s 400 individual medley.

The United States continued to pile up medals, with Emma Weyant taking silver and Hali Flickinger the bronze. The Americans have earned five of a possible nine medals from the first three swimming finals, including a gold by Chase Kalisz in the men’s 400 individual medley.

Swimmer Ahmed Hafnaoui of Tunisia was the surprise winner in the men’s 400-meter freestyle at the Tokyo Games.

Australia’s Jack McLoughlin settled for silver after leading much of the race, and Kieran Smith grabbed another Olympic medal for the Americans.

It is the third swimming medal for the U.S. after Chase Kalisz won the first American medal of the Tokyo Games, taking gold Sunday in the men’s 400-meter individual medley.

Jay Litherland won the silver on the same race, rallying on the freestyle leg to take the silver.

Jay Litherland made it a 1-2 finish for the powerhouse U.S. team, rallying on the freestyle leg to take the silver. Brendon Smith of Australia claimed the bronze.

Americans April Ross and Alix Klineman have cruised to a straight-set victory over China in their Olympic beach volleyball opener.

Ross is making her third appearance in the Summer Games with her third different partner. She’s already won a silver medal and a bronze. Klineman is making her Olympic debut. They’re among the favorites for the gold medal in Tokyo.

The Americans won the first set 21-17 and then took the second 21-19 over Xue Chen and Wang Xinxin.

The American men’s team of Jake Gibb and Tri Bourne play their first match on Sunday night. Bourne was a late substitute after Gibb’s original partner, Taylor Crabb, tested positive for COVID-19 when he arrived in Japan. They’ll face Italy.