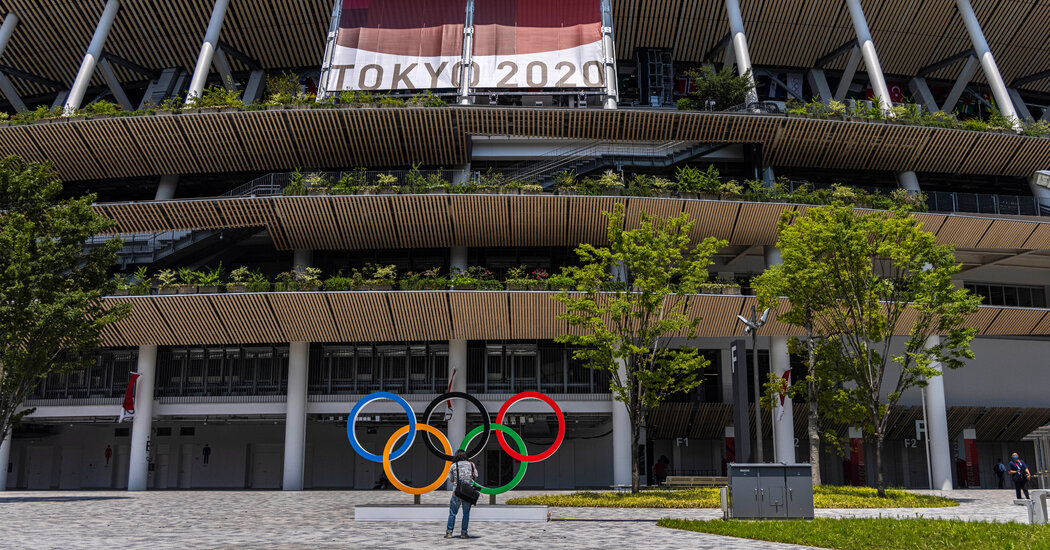 The opening ceremony of the Tokyo Olympics are still a day away, and there’s already been a major upset. But the drama hasn’t been limited to the field.

Organizers are still struggling to reassure residents that the thousands of athletes who have yet to arrive won’t worsen the spread of Covid-19 in Tokyo. And a new rash of cases among athletes has sidelined more players and teams, including Mexico’s baseball squad, which is now in quarantine back home and waiting for clearance to travel.

And while only two sports — soccer and softball — have officially started play this week, there are already signs that players will take advantage of rules that allow for more activism and protests before the start of a game. On Wednesday, members of four women’s soccer teams took a knee before their matches.

Shock on the field

The U.S. women’s soccer team began the tournament the way it had ended the 2016 games in Rio: by losing to Sweden.

Back then, the quarterfinal loss cost them the gold medal. This time, the 3-0 defeat on Wednesday ended the team’s streak of 44 straight games without a loss. The U.S., which has won four gold medals, was one of the favorites to win it all, coming off a title in the 2019 World Cup.

The U.S. side now has two days to regroup before its next match, on Saturday against New Zealand. That’s not much time, and that game and Tuesday’s match with Australia are likely must-wins if the U.S. women want to collect enough points to qualify for the next round, where they could face powerhouses like Britain, Brazil and the Netherlands.

The games have already been affected by the coronavirus pandemic. Japan, which had put in place tight restrictions over the past year, wanted to make sure that these Games went off without a hitch after having delayed them a year. So the organizers made some big moves, including barring spectators, which has proved divisive. But the decision has also done little to assuage the concerns of residents in Tokyo and across Japan, where numbers of cases are rising.

Just two weeks ago, the English men’s soccer team was grabbing headlines when its players knelt to highlight racism before games in the Euro 2020 tournament. While the team lost the championship to Italy, it helped highlight causes that were important to the players and even earned the ire of politicians in England.

That should have been a signal of what to expect at the Olympics, where the organizers relaxed rules, allowing players to protest before games. Protests are still banned during play or at the awarding of medals. So far, the women’s soccer teams from Chile, the United States, Sweden and Britain have taken a knee.

And viewers should prepare for more protests on Friday at the opening ceremony and in the coming weeks of events, according to Tommie Smith, who famously raised a fist to highlight the oppression of Black Americans when he was awarded the gold medal for the 200 meters in track and field in Mexico City in 1968.

Read the New York Times interview with him on what to expect.

The 2020 games haven’t even officially started, and we are already talking about the host for 2032: Brisbane. It’s the third-largest city in Australia, located on the country’s east coast near the surfing meccas of the Gold Coast. It’s the third time Australia will host the games.

The decision to name Brisbane as the 2032 host probably didn’t come as a surprise to one person: John Coates. He’s one of the vice presidents for the International Olympic Committee, which wrote the new rules for selecting a host. He also happens to head the Australian Olympic Committee, the group that pitched the bid.

Read Tariq Panja’s profile on Coates and how he led the charge to bring the Games back to Australia.

The Spanish artistic swimmer Ona Carbonell is expressing her “disappointment and disillusionment” that she has been told she cannot bring her son to Japan for the Tokyo Olympics while she is breastfeeding him.

Carbonell said in an Instagram video this week that she would not be bringing her son, Kai, who is nearly a year old, to the Games, and that she had been made to choose between her family and her Olympic goals in artistic swimming, the sport formerly known as synchronized swimming.

“Well, when Kai was born, I realized that I was getting fit and I could reach the Olympic Games in Tokyo, the first thing I asked was if I could bring Kai with me as I was breastfeeding him, and they said no,” Carbonell said in Spanish in the video as she breastfed her son.

“A few weeks ago, some female athletes started posting about this on social media,’’ she said. “The subject was to choose between family and breastfeeding or to participate in the Olympic Games.”

“We were told this was not compatible,” she said.

She said that she and her coach petitioned the organizers of the Tokyo Games to allow her to travel to Japan with Kai. When she heard back about two weeks ago, she said, she was told that the conditions had been set by the Japanese government.

Olympic organizers barred spectators from most events earlier this month, after a new state of emergency was declared in Tokyo in response to a sudden spike in coronavirus cases. The International Olympic Committee did not immediately respond to a request for comment about Carbonell’s video.

“The conditions imposed are that Kai and Pablo would have to stay in a hotel,” Carbonell said in the video, referring to the boy’s father, Pablo Ibáñez, “and we wouldn’t know how far it is until we’re there.” She said they would not be allowed to leave the hotel for the duration of their time in Japan. The Olympic opening ceremony is on Friday and the Games run through Aug. 8.

“For me to go breastfeed Kai whenever he needs it during the day, I would have to leave the Olympic villa, the team’s bubble, and go to their hotel,’’ she said. Doing so, she said, would risk her teammates’ health.

In a message accompanying the Instagram video, she said that while she had received “countless expressions of support and encouragement to go to Tokyo with Kai,” she “wanted to express my disappointment and disillusionment that I will finally have to travel without him.”

CHOFU, Japan — Five years. That is how long it had waited for this game.

Five years since the United States women’s soccer team’s hopes for an Olympic gold medal at the 2016 Rio Games were dashed by Sweden. Five years since a defeat that forced the Americans to look in the mirror and ask hard questions about their age, dominance and future.

Five years of waiting, only to end up right back in the same place.

The United States opened the Tokyo Olympics on Wednesday exactly where it ended the Rio Games five years earlier: reeling from a humbling, embarrassing defeat to Sweden.

Back then, it was a loss on penalties in the quarterfinals. This time, it was not nearly as close: Sweden dominated the United States, 3-0. Back then, Sweden had bunkered down and frustrated the Americans. On Wednesday, it simply dominated from one side of the field to the other.

“Did we expect this result tonight? No,” U.S. forward Megan Rapinoe said. “It’s frustrating, and it’s frustrating that it’s Sweden.”

“I don’t remember the last time we gave up a goal,” she added. “So to give up three is not great.”

Defender Kelley O’Hara acknowledged before the game that she and her teammates had been pining for another shot at the Swedes at the Games. “It’s what we’ve waited now five years for, to be back here,” she said.

They just never expected it to go like this.

Striker Stina Blackstenius delivered a goal in each half for Sweden, a glancing header in the 25th minute and a point-blank finish in the 54th that felt like a just reward for a dominant performance at the tip of a Sweden attack that had the Americans on their heels almost as soon as the game began.

The United States tried everything to turn the tide. Positional tweaks to try to aid a midfield that was routinely overrun. Substitutions to refashion a largely toothless attack. Reinforcements to bolster a defense that was first stretched and then cut apart.

Even the most reliable of veterans brought on to help seemed to have little effect. Carli Lloyd and Julie Ertz — in her first appearance in months — came on at halftime, but Sweden soon doubled its lead. Rapinoe was inserted to offer a bit of menace on the wing, but it never materialized.

Britain’s women’s soccer team became the first athletes to take advantage of the loosening of the International Olympic Committee’s decades-long prohibition against expressions of protest.

Just before kicking off their 2-0 win over Chile, players on Team GB dropped to one knee in a protest to promote racial justice in a manner that has become common places on soccer fields in the United Kingdom and elsewhere over the past year. Chile’s players joined the demonstration as well, and players from the United States and Sweden also knelt before Sweden’s 3-0 win later Wednesday.

Such an action would have led to severe sanctions had the rules not been changed in the lead up to the Tokyo Olympics.

The gesture, which spread across the sporting scene after the killing of George Floyd 14 months ago, is likely to be repeated throughout the games as athletes across the spectrum have pushed for greater rights of expression. Those calls led to the organizer of the Olympics to water down Rule 50 of its charter that banned any “demonstration or political, religious or racial propaganda.”

Still, for some athlete groups the I.O.C.’s change of stance has not gone far enough. Athletes will not, for example, be able to express their protests on the medal podium. The I.O.C.’s rules also allow individual sports federations to retain the ban. FIFA, soccer governing body, has said it has no problems with player protests at the Games. The same goes for track and field. However, swimming’s leaders have said they will not countenance any form of protest on the pool deck which, according to the president of its governing body, should remain “a sanctity for sport and nothing else,” where there should be “respect for the greater whole, not the individual.”

The hodgepodge of regulations raises the possibility of some athletes being sanctioned for gestures that others will have made.

“There is not really a ‘one size fits all’ solution,” I.O.C. President Thomas Bach said before the Games.