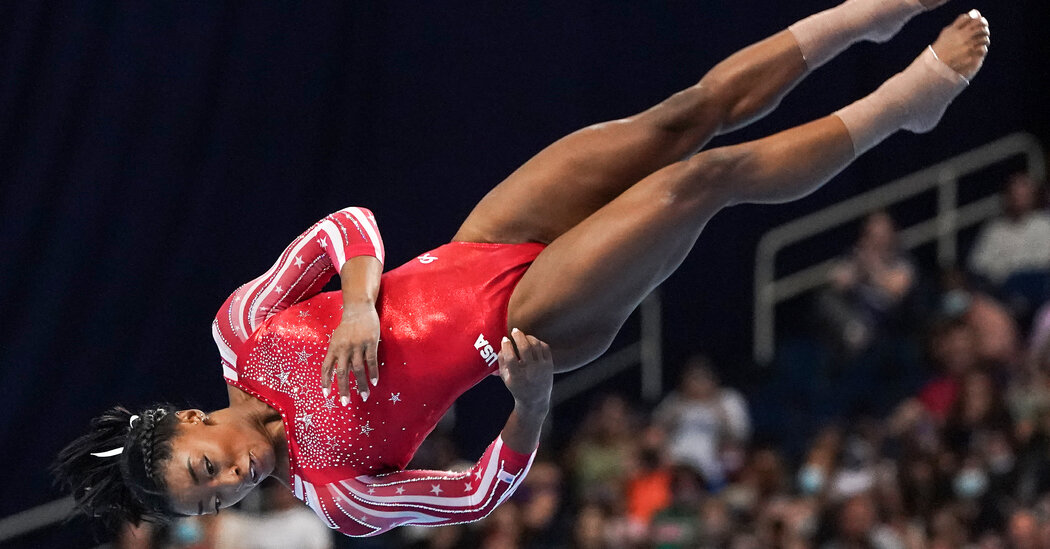 At about 2:10 a.m. Eastern time, the transcendent American star of the Games takes to the uneven bars, the beam, the vault and the floor for the first time at these Olympics. For American television viewers, NBC is showing the competition in its prime-time coverage, beginning at 7:30 p.m. Eastern on Sunday.

Swimming is always an anchor of the first week of the Games, and the first four golds are set to be awarded starting at 9:30 p.m. Saturday Eastern time, perfect for live prime-time viewing. On tap are the grueling 400-meter individual medleys. That’s a chance for two international stars to shine: Daiya Seto of Japan and Katinka Hosszu of Hungary. The men’s 400 meter freestyle and the women’s 4×100 free round out the lineup.

Naomi Osaka will always be remembered for these Games after lighting the cauldron at the opening ceremony. She will also want to be remembered for winning the tennis gold medal; she opens against Zheng Saisai of China.

April Ross and Alix Klineman are the new American stars in women’s beach volleyball and will try to follow in the footsteps of the legendary team of Misty May-Treanor and Kerri Walsh Jennings.

After some stutters in exhibition games, the American men’s basketball team plays for real for the first time, and its opponent is a good one: France, which features five N.B.A. players, including Rudy Gobert.

Here are some highlights of U.S. broadcast coverage for Saturday evening, including the first appearance of skateboarding in the Olympics and the next game for the seemingly unstoppable U.S. softball team. All times are Eastern.

Skateboarding: Men’s street skateboarding makes its Olympic debut, with live coverage of the preliminary runs starting at 7:30 on USA. Coverage of the finals starts at 11, also on USA; NBC picks it up at midnight.

Beach volleyball: Preliminary matches will be included in NBC’s multisport coverage starting at 8. At 9, NBCSN will rebroadcast an earlier match between Phil Dalhausser and Nick Lucena of the United States and Alexander Brouwer and Robert Meeuwsen of the Netherlands. NBC plans additional coverage during its overnight broadcast, starting at 2 a.m.

Swimming: NBC will include the finals of the men’s and women’s 400-meter individual medleys in its multisport coverage starting at 8, with additional coverage during its overnight broadcast starting at 2 a.m.

Three-on-three basketball: Look for live coverage of a preliminary game during NBC’s multisport coverage starting at 8. Additional coverage starts at 8 on CNBC and at 10:40 on USA.

Softball: The U.S. women are on a roll, and they face Australia at 9 on CNBC, with a replay at midnight on NBCSN.

Tennis: First-round singles and doubles matches continue, with coverage starting at 10 on the Olympic Channel.

Volleyball: NBCSN has a replay of the men’s match between the United States and France at 10. The U.S. women take on Argentina in a Group B match at midnight on NBC.

Archery: USA has elimination-round coverage at 10:40, and CNBC will carry the final of the women’s team event at 3 a.m.

Cycling: Coverage of the women’s road race starts at midnight on USA.

Table tennis: The mixed-doubles quarterfinals start at 12:20 a.m. on CNBC.

Water polo: CNBC has the men’s Group A match between the United States and Japan at 1 a.m.

Gymnastics: The men’s team competition is in the mix during NBC’s overnight coverage, starting at 2 a.m.

This is the debut of skateboarding at the Olympics, but it will look a lot like other major skate contests, such as the Dew Tour or Street League Skateboarding.

There are two distinct disciplines: street and park, both of them judged by a panel, each with their own qualified athletes. If you watch snowboarding at the Winter Olympics, think of them a little like slopestyle and halfpipe — variations in the setting that feature slightly different types of acrobatics.

Both street competitions are top-heavy with favorites. For the men, Nyjah Huston of the United States is considered the best street skater in the world. His biggest rival is Japan’s Yuto Horigome, who beat Huston at June’s world championships and might emerge as one of his country’s big Olympic stars.

The women’s street contest could see a Brazilian sweep. Impeding that possibility might be skaters from Japan and the United States, like Mariah Duran or Alana Smith. But Brazil has three of the world’s best: the five-time X Games gold medalist Leticia Bufoni, Pamela Rosa and Rayssa Leal, who is just 13.

Because of the time zone difference, these competitions will begin the previous evening on the East Coast and end after midnight. They will be shown on NBC, CNBC or the USA Network.

In a telephone interview about a week before leaving for the Tokyo Games, Simone Biles was asked to name the happiest moment of her career.

“Honestly, probably my time off,” she said.

Coming from the most decorated gymnast in history, a woman who revolutionized the sport, it was a striking comment.

Five years ago, Biles did everything her sport and her country asked her to. Sporting a red, white and blue bow in her hair, she helped the United States women’s gymnastics team secure its third consecutive team Olympic gold medal and then won three individual gold medals, in the all-around, the vault and the floor exercise. She emerged from those Games as America’s sweetheart, the itchy sash placed on every great American female gymnast.

Then, only weeks after she returned from Rio, came the revelation that the people responsible for protecting gymnasts and safeguarding the integrity of the sport had failed catastrophically to do either, revealing an entrenched culture of physical and emotional abuse.

U.S.A. Gymnastics had looked the other way as Lawrence G. Nassar, a longtime national team doctor, molested hundreds of female athletes, including many of Biles’s teammates — and, though it took time for her to realize it, Biles herself.

She has said she feels betrayed, and that makes the initial trauma even worse. Yet she has managed to set aside those feelings and harness the newfound power of an independent Black woman who knows her worth and answers to no one. No longer just a sweetheart, she has joined top Black female athletes like Naomi Osaka and Serena Williams in flexing her influence in sports and society.

In a show of defiance and resilience in a sport that has long demanded obedience from its young athletes, Biles is the only Nassar survivor, at least the only one who has come forward publicly, who will compete in Tokyo.

“I’m going to go out there and represent the U.S.A., represent World Champions Centre, and represent Black and brown girls over the world,” she said in the telephone interview. “At the end of the day, I’m not representing U.S.A. Gymnastics.”

Twenty-three sports kicked off play on Saturday in Tokyo, including table tennis, gymnastics and swimming. Here are some of the best photos from the New York Times team on the ground.

At least 35 members of the 583-strong Japanese Olympic team are multiracial. They are considered medal contenders in tennis and judo and will compete in boxing, sailing, sprinting, rugby and fencing, among other sports.

Their ranks include two of the highest-wattage athletes on Team Japan: Rui Hachimura, the basketball player whose mother is Japanese and father is Beninese, and Naomi Osaka, the tennis champion whose father is Haitian American and whose mother is Japanese. On Friday, Ms. Osaka, 23, climbed a flight of stairs etched into a pyramid shaped like Mount Fuji and lit the Olympic cauldron perched on top.

That two of the opening ceremony’s star roles went to multiracial athletes underscores how eager Japan is to present a diverse face to the world. Ms. Osaka’s and Mr. Hachimura’s popularity in Japan had already been confirmed when Nissin, the instant noodle manufacturer, affixed their faces to Cup Noodle packaging, an advertising honor akin to appearing on a cereal box.

But even as Japan celebrates the accomplishments of its “hafu” athletes — “half,” as in half-Japanese and half-something else — it must still contend with xenophobia in a society whose ideas of nationhood are tied to race.

“My entire existence has been a challenge to those around me of what it means to be Japanese,” said Sewon Okazawa, an Olympic welterweight boxer who is the son of a Japanese mother and a Ghanaian father.

The U.S. swimmer Katie Ledecky’s domination is so routine that her surname has become a verb, synonymous with crushing the competition. For nearly a decade, she has ledeckied away in her specialties — distance swims longer than 400 meters — rarely facing a true challenger and certainly nothing resembling a rival.

Now she has one.

Ariarne Titmus of Australia, a fearless Tasmanian who talks big and has the speed in the pool to back it up, is about to ask Ledecky the one question she has never had to answer in her two previous Olympic appearances: How will she respond to a swimmer who has placed a target on her back and taken dead aim at it?

“I’m sure she is going to be fast, and I’m sure she thinks the same of me,” Ledecky, 24, said of Titmus in a pre-Olympic news conference this month.

How fast is Titmus? Lately, when it has counted most, she has been a good bit faster than Ledecky at both 200 and 400 meters, races that Ledecky swept four years ago.

In the 200, Titmus came within 0.11 of a second of the record, which was set in 2009, when swimmers wore sleek suits that reduced drag, which are now banned. Ledecky swam the 200 freestyle at the U.S. trials in 1:55.11, more than two seconds behind the world record.

Aside from her times, Titmus’s comments after the trials rocketed across the swimming world.

“She’s not going to have it all her own way,” Titmus said of Ledecky after her 400 race.