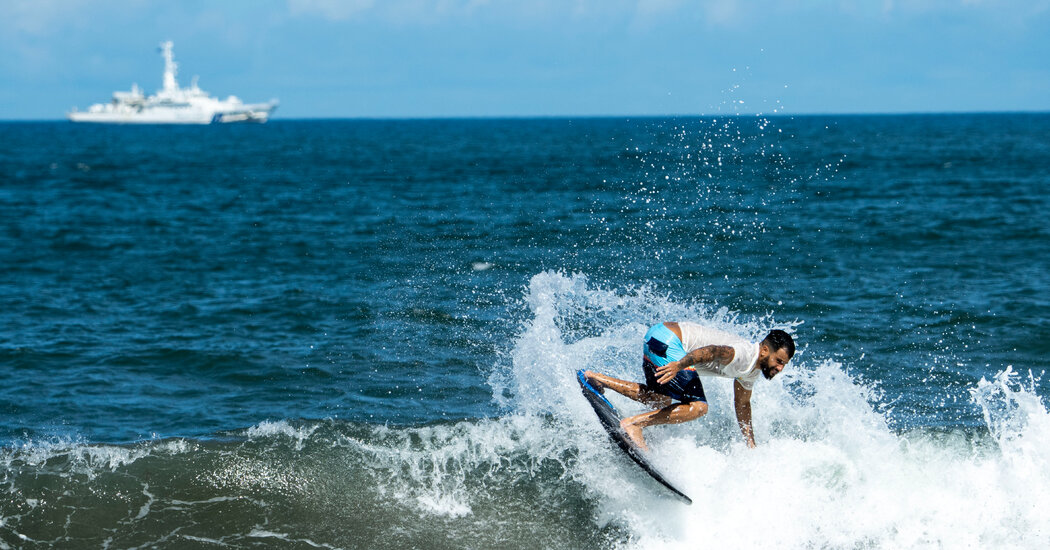 ICHINOMIYA, Japan — Kolohe Andino, 27, has never had to go far to find good waves, the kind that draw people from far away.

Born and raised in San Clemente, Calif., the son of a professional surfer from the 1980s and early ’90s, Andino has always been a short amble away from the steady break at T Street and the sporadic pumpers at Upper and Lower Trestles.

Now that he has arrived at the Olympics in Japan, part of the four-person United States team, all those years in his hometown might just lead to his career’s biggest victory. The debut of surfing at the Tokyo Games promises big-name talent but unspectacular waves — just the kind that Andino has surfed all his life.

“My chances are good, super good,” Andino said. “I grew up surfing similar waves, my equipment’s really good for that type of waves, and my attitude toward poor waves is good for me: When I’ve done good in the past is when the waves are bad, and everyone’s kind of like, ‘Oh, man,’ and whining about it. I thrive in that.”

On Tuesday, Olympic surfers got their first look at Tsurigasaki Beach (sometimes called Shidashita Beach by locals) in Ichinomiya, where the surfing competition is scheduled to begin on Sunday. The venue is about 60 miles from Tokyo on Japan’s east coast.

As predicted, and feared, the waves were small, breaking near shore in waist-high water. The forecast is for bigger swells, perhaps nudged by a tropical storm forming south of Japan, early next week.

Andino is not bothered by the uncertainty, or the likelihood that the Olympic contest will have less-than-monumental waves. His father, Dino, a former national champion and world-tour competitor, shared his positive vibe. Dino Andino, 52, grew up without much parental supervision in San Clemente. (“With his scruffy beard, dishwater blonde mop tucked under a floppy hat, he looks more like Jeff Spicoli than Sean Penn did,” The Los Angeles Times wrote in 1993, the year before Kolohe was born.)

Dino tried to be the kind of father he never had, shepherding Kolohe through a stellar youth career that led to the World Surf League championship tour at age 18. The two remain close, literally.

“If I pick up a rock and throw it three times I could hit his house,” Dino said.

As for the Olympics, the father does not like calling the anticipated conditions in Japan an advantage for his son.

“But he should be comfortable,” he said.

Surfing has been trying to get onto the Olympic program for years, and its supporters pushed for it to be included in the 2016 Summer Games in Rio de Janeiro, a surfing hot spot with world-class waves and a picturesque backdrop.

Instead, its Olympic debut will come in Japan, a country with ample coastline but few world-class breaks. It is more Jersey Shore than North Shore.

There was talk of using the fast-growing technology of artificial waves, but the Olympics decided several years ago that it was more important to stage the competition in a natural setting.

No one is sure what to expect. The format, for 20 men and 20 women (and no more than two of each from any country), calls for four days of competition over an eight-day window.

Surf conditions can be fickle, day by day and hour by hour, at the best breaks on the globe. There is concern that bad timing in Japan might make the Olympic competition a dud — at least in the eyes of casual fans accustomed to images of giant turquoise barrels or viral videos of big-wave surfing.

Future Olympics promise more eye candy. The 2024 Summer Games in Paris will hold their surfing competition in Tahiti, in French Polynesia. The 2028 Olympics are in Los Angeles, and 2032 is expected to be in Brisbane, Australia. All of those locations, like Rio, summon more sparkling images of surfing than Japan.

Tokyo 2020 organizers hope to change that. Tsurigasaki Beach has held second-tier international competitions, so some of the Olympic athletes have experience there. So does Dino Andino.

“It would be more of a spectacle if it was in Hawaii or Tahiti, where the waves are really big and gnarly,” Dino Andino said. “But very few people would be able to relate to that because they don’t see those types of waves anywhere they are.”

To adapt to the expected conditions, the four U.S. Olympic surfers gathered in Southern California this month, a sort of minicamp in the types of waves that they expect to see at the Games.

Carissa Moore, the four-time women’s world champion, and the two-time men’s world champion John John Florence are from Hawaii, home of some of the world’s biggest waves. Caroline Marks, 19, is from Florida, but made a home in Southern California a few years ago.

“Carissa and John John grew up in Hawaii — more powerful waves, clear water,” U.S. Olympic coach Brett Simpson said. “It’s just a different style. But they’ve spent half their life competing in California and around the globe, and they’re at the top level because they can adapt their styles.”

Andino had finished in the top seven in the season-ending W.S.L. standings three times from 2016 to 2019, when he arrived at the final stop, Pipe Masters in Hawaii, with a chance to take the title. He finished ninth in the contest and fifth for the season.

But by then he already knew he had become the first American man to qualify for the Olympics. He watched as Florence and Kelly Slater fought for the other spot. Florence got it.

Then the 2020 season was scuttled, and both Andino and Florence were hurt early in 2021. Andino sustained a high-ankle sprain in March, during his first event of the year. Florence was ranked third in the world in May when he injured his knee and had surgery.

Andino and Florence only eased back into the water in June. Weeks later, the combination of the unfamiliar venue, the expected small waves and the limited number of competitors has left the competition for medals wide open.

“It’s so weird, competitive surfing,” Kolohe Andino said. “You could be the best surfer, the most talked-about surfer, whatever, and you go out there and you just need a score and you cannot find a wave. It’s like Tom Brady needs to go down the field for the winning score and he can’t find the ball.”

On the women’s side, both Moore and Marks are strong medal contenders. Johanne Defay of France and Australia’s Sally Fitzgibbons and Stephanie Gilmore are among the others.

For the men, Brazil’s Gabriel Medina and Italo Ferreira are the past two world champions and entered July ranked Nos. 1-2 in the world standings. Japan’s Kanoa Igarashi, born and raised in California to Japanese parents, is among those who could upset them. Because of the restricted field, though, which was mostly set in 2019, five of the top 10 surfers in the world standings will not participate in the Olympics, opening opportunities for some lesser-known names.

Andino is a bona fide surfing star, in the slipstream of Florence, who is about 18 months older. He won a record nine national titles as an amateur, and qualified for the W.S.L. championship tour as a teenager in 2012.

He is part of the generation that brought acrobatics to the waves, with sharp cuts and big airs, a style that others, particularly the Brazilians, have turned into championships. It is the kind of approach that may prove useful at the Olympics.

Yet despite all his success, Andino has never won a championship tour event, going 0 for 5 in head-to-head finals. “I’m saving it for the Olympics!” he said with a laugh.

He can think of nothing better. Andino said that he records and consumes Olympics coverage.

“I’m absolutely fascinated by people devoting their lives to a sport and to that moment,” he said. “And I’ve grown up next to Camp Pendleton, so I’m very patriotic. It’s kind of like those worlds come into one, into an explosion of fun-ness on the television.”

He is drawn to sports he knows nothing about, like biathlon. (“They’re skiing so hard, then they stop and shoot. The analogy in surfing is padding so hard that you’re almost puking, then you have to get up and ride the wave, totally focused.”) He was enamored with the cross-country skier Jessie Diggins and her breakthrough success. He can name all sorts of famous and not-so-famous moments in the Olympics, winter and summer, all before surfing’s arrival.

At the time, he was still using crutches to get around, protecting his ankle. Soon, though, Andino was back in the familiar water, just down the street, riding the breaks he knows as well as anyone.

He does not know exactly what to expect in Japan, but he hopes it feels a lot like home.