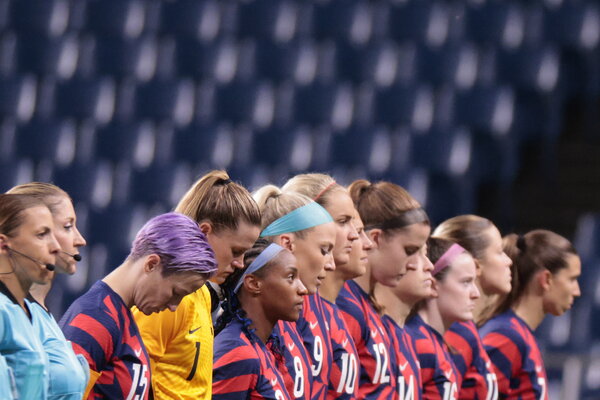 Both teams are going through expansive, spirited warmups on the field at Yokohama International Stadium, which is ENORMOUS. But it will never not be weird to hear booming public address announcements in these giant stadiums, welcoming you to a game that no fans can attend.

The numbers, if you are the United States women’s soccer team, do not tell the story you were hoping to write at the Tokyo Olympics: three games, one win, countless questions.

But that is all in the past now, defender Crystal Dunn said Thursday. Yes, the Americans were shut out twice in their first three games. Yes, they have struggled to turn their chances into goals. Yes, they could have been better in many areas.

But the only game that matters now, Dunn said, is Friday’s quarterfinal against the Netherlands in Yokohama, a match she described as “all or nothing.” (Follow live coverage.)

That night in Brasília was a look-in-the-mirror moment, a crossroads game from which the Americans’ next steps could have led to disaster. Instead, the defeat became a milepost on the road to the 2019 Women’s World Cup championship, a title claimed by many of the same players on the team now and in a final against many of the same Netherlands players they will face on Friday.

The problem, at least for the Americans, is that the current Netherlands team might be better than the one they beat, 2-0, two years ago. The Dutch, the reigning European champions, have been devastating offensively here: They scored 21 goals in their first three games and have two players — Vivianne Miedema (eight) and Lieke Martens (six) — with as many goals as the entire United States squad has produced.

And they may be looking to rewrite some recent history of their own. But the Americans will be looking to prove a point, too, after some frustrating performances in the first round. First up will be avoiding another early Olympic exit.

“I think that the team is really hungry,” U.S. forward Christen Press said. “The group stage has left us feeling like we have more to give. And I think that’s a great thing, it’s a powerful thing and it’s intimidating.”

The U.S. lineup drops both the best player from the World Cup final against the Netherlands (Rose Lavelle) and that tournament’s outstanding player (Megan Rapinoe). A front line of Tobin Heath-Carli Lloyd-Lynn Williams is supported by a midfield of Sam Mewis-Julie Ertz-Lindsey Horan.

Those are definitely … choices.

The United States-Netherlands game is one of four women’s quarterfinals today. Two have begun: Canada and Brazil played a scoreless first half in Rifu, and Australia leads Britain on a first-half goal by Alanna Kennedy in Kashima. Host Japan and Sweden play in Saitama later.

The last time I saw these two teams play each other was at the 2019 World Cup final in Lyon, France. It was one of the more stirring stadium environments I’ve ever been in, with a packed crowd at the end serenading the victorious Americans with chants of “equal pay!” We’ll see a far different atmosphere tonight in Yokohama, where a prohibition on fans will leave the sprawling stands essentially silent.

The United States was still talking about tactics on the day before it played the Netherlands. Not so much looking ahead, but back.

There was much grumbling, inside and outside the team, over Coach Vlatko Andonovski’s decision to employ a more defensive, more conservative game plan in the Americans’ third group game against Australia.

Andonovski, correctly and not for the first time, noted the game plan had worked: The United States did not allow a goal, or even more than one or two real chances, against Australia and emerged with the draw it needed to advance to the quarterfinals.

“It’s not easy, and sometimes we have to sacrifice some of the things we believe or have worked on to execute the game plan,” Andonovski said. “That was not something we’ve done in previous games. But that was the game plan, and I feel like we executed it well.”

The idea to sit back and repel attacks and grind out a draw, though, rather than direct the pace of the game and stay on the front foot, was not universally popular. Forward Alex Morgan repeatedly referred to “a tactical decision by Vlatko” when she was asked about the game plan after the match, and defender Becky Sauerbrunn brushed aside the performance as “disciplined, professional — what we needed to do.”

On Thursday, as criticism of the tactics continued on social media — the preferred forum for outraged and overheated discussions related to the U.S. team — the issue came up again in a call with two players. Both made clear they would be happy to receive new instructions for their game against the Dutch.

“The tactics that we’ve been given is obviously what we need to execute,” defender Crystal Dunn said. “We trust our staff to put us in a position to execute.”

But Dunn and forward Christen Press also made clear that the players were eager to get back to driving at teams instead of fending them off, waiting them out.

“Ultimately,” she added, “when the team’s at its best, we are relentless and lethal.”

The Netherlands has been the highest-scoring team in the Olympic tournament, with 21 goals in three games.

“They believe in their system,” U.S. Coach Vlatko Andonovski said of the Netherlands. “They believe in what they do. They’re very rigid at times, which makes them who they are, as good as they are. Because their system works, and they’ve showed that over and over in their games.”

But that rigidity may give the United States a sense of what to look for on Friday night, and what they have seen so far might offer a glimmer of hope. While the Dutch have been the most potent offense in the field by far, they also have allowed eight goals — by far the most of the eight teams in the knockout round.

First, though, he has to get his own team on track. The United States was shut out in two of its three games in the group stage — a rarity, and a potentially worrisome one — and has had almost as many goals ruled out by offside calls (five) as it has actually scored (six).

The United States may want to avoid a shootout against an offense led by Vivianne Miedema (eight goals) and Lieke Martens (six), but U.S. forward Christen Press said it had the talent to do so as needed.

“The team is really hungry,” Press said. “The group stage has left us feeling like we have more to give. And I think that’s a great thing, it’s a powerful thing and it’s intimidating.”