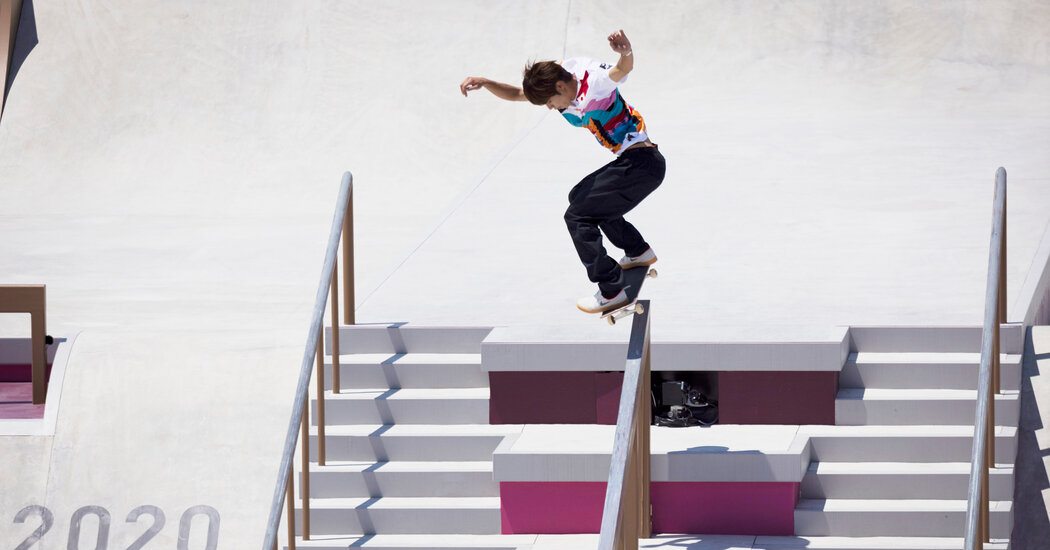 TOKYO — With its street-riding roots, youthful vibe and full immersion into culture of all kinds, skateboarding was invited to the Olympics because its global reach could no longer be denied.

But it only had to look across town for its first Olympic champion.

Yuto Horigome, the 22-year-old son of a Tokyo taxi driver, had the gold medal for men’s street skateboarding draped around his neck on Sunday in an empty, sun-drenched skatepark about eight miles from where he grew up.

With the venue’s grandstands left empty because of pandemic protocols, the biggest ovation he received was from the army of volunteers working at Ariake Urban Sports Park, who trailed him with enthusiastic applause.

But the victory was sure to resonate. A few miles away, Horigome’s father, Ryota, the one who first taught Yuto how to ride, was too nervous to watch, even on television. He left the family’s third-floor apartment in an unassuming eastside neighborhood and went for a bicycle ride.

Eventually, calls and messages poured into his phone. He knew what it meant.

Yuto had won. And Japan, where skateboarding in the streets remains a discouraged, sometimes lawbreaking activity, had a gold medal street skateboarder.

“I was born here in Koto ward and started skateboarding in Koto ward,” Horigome said, referring to the area of Tokyo that includes his family home and the skateboarding venue. “I still cannot believe that I’m here at the Olympics. I’m very happy to have performed my best in Koto ward.”

Horigome’s victory was not a surprise. He had won the last major skateboarding event, the world championship in Rome, and was expected to earn a medal in Tokyo.

The bigger upset was the fate of Nyjah Huston of the United States, the biggest name in contest skateboarding.

Huston fell four times in a row on Sunday, leaving his hopes spilled on the hot concrete and ending his chance to add an Olympic medal to his overstuffed trophy room at home. He finished seventh.

Nerves seemed to jangle several top competitors, and clean landings were hard to find. Huston admitted to feeling the pressure, but said that attempting technical tricks was a risky business.

The one that repeatedly undid his chances was one he had practiced all week, what he called a “Caballero kickflip backside lipslide with a fakie 360 flip.” Saying it is hard; performing it during an Olympic final became the difference between a medal and an apology.

“I’m sorry,” Huston said. “I know I definitely let some people down, and I have no problem admitting that. But I’m human, you know. We’re skateboarders. We’re not going to go out there and win every single time with the stuff we’re doing out there. It’s way too technical for that.”

While Huston’s inability to earn a medal was a surprise, it helped leave room for Jagger Eaton, a fellow American, to grab the bronze medal, behind Kelvin Hoefler of Brazil.

They were the steadiest competitors from the start. Hoefler, 28, is a composed veteran of major contests. Strong back-to-back runs gave him the midway lead.

Eaton, a 20-year-old from suburban Phoenix, admitted that he nearly threw up before the contest began because of nerves. But he finished second among the 20 competitors in the preliminary heats, and showed few signs of anxiety in the final.

His third trick was the second-highest score of the day. He celebrated his bronze medal on the podium with a smile disguised by the mandatory face masks that are a part of the pandemic-era uniform.

“The best thing about skateboarding is that all of these guys are my friends,” Eaton said. “And I don’t think a lot of sports can say that.”

Skateboarding has worked for decades to get into the Olympics, and the men’s street contest was the first of four at the Ariake Urban Sports Park. The women’s street skaters were set to compete on Monday, and men’s and women’s park competitions will be contested in more than a week.

The debut street contest was a sweaty, sun-baked affair under blue skies. Each athlete performed two timed runs through the skatepark, hustling for 45 seconds on their own path through a vast course of ramps, stairs and rails.

Then they took turns trying five tricks of their choosing. A panel of judges scored each run and trick — seven scores in all — on a 10-point scale. The best four scores were added together to produce a competitor’s total.

That is where the event evolved into a tense can-you-top-this exhibition, as one skateboarder after another did nuanced variations of tricks off the park’s biggest feature, a 12-stair drop with three different rails.

It was an all-or-nothing venture. Falls got zero points. Stuck landings earned scores to keep. Each trick ended either on the concrete in despair or on the skateboard in some mix of relief and elation.

Huston and Horigome, as expected, attempted their final tricks with a gold medal within reach. That is where their fates wildly diverged.

Huston fell four times in a row, a string of zeros on the scoreboard that added up to nothing.

Horigome landed back-to-back-to-back tricks, all scoring at least 9.3 points, on his final three attempts. The math led to a gold medal.

“I’m glad that I trusted myself, as I was confident that I could perform the best trick,” Horigome said. “The third one was the trick I had never performed in the past competitions. I started practicing five minutes before the final.”

He said he planned to show his gold medal to friends and family later. Unlike Huston, who has a room in his house devoted to a career’s worth of trophies, Horigome hangs his medals around the neck of a stuffed Pokemon Snorlax. (It is called Kabigon in Japanese, widely known for overeating and falling asleep.)

While he was born in Japan and learned to skate here, Horigome now spends most of his time in Southern California, an epicenter of skateboarding culture and a place — unlike Japan — that is relatively friendly to those who use cityscapes as their training ground. The next time a security guard chases Horigome from an office park or schoolyard, his defense could be that he is a gold medalist, simply training for an Olympics.

But Tokyo is home, even if he has not been able to visit family since the start of the pandemic. Japan’s skateboard coach, Daisuke Hayakawa, grew up in the same neighborhood and has been a friend of Ryota Horigome’s since they were teenagers.

They were a part of a generation that rode only in the shadows in Tokyo, a time when skateboarders were seen as noisy, undignified renegades — a perception that remains hard to crack. While skateparks are popping up across Japan, seeing skaters on Tokyo sidewalks is still uncommon.

Ryota Horigome skated in a quiet corner of Komatsugawa Park, where he and his friends built a quarter pipe under a bridge and wore down the stone steps with their skateboards. It is where Ryota Horigome took Yuto as a boy. A sign there now says that skateboarding is not allowed.

After Yuto won the gold medal, he turned his thoughts to home, just a few miles away.

“My most favorite place in Koto ward is Komatsugawa Park where I started skateboarding,” he said. “I first visited there with my father, a former skateboarder. Now I live in the U.S. When I sometimes come home, I enjoy skateboarding with my friends in the park.”

The next time he sees them, they can all bask in the knowledge that skateboarding did not have to go far to make its giant leap into the Olympics.