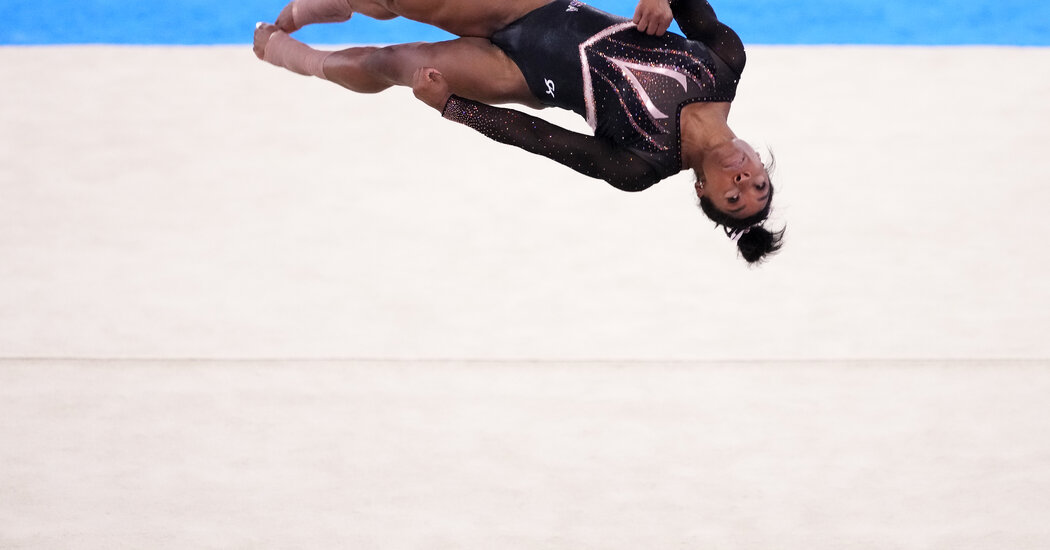 Women’s gymnastics is a marquee sport at the Summer Olympics, but otherwise doesn’t get much attention outside a dedicated group of fans.

I’m one of those fans, as well as a former (decidedly not Olympic-caliber) gymnast, and I’m here to help you watch with a more discerning eye. Do you want to know what’s required on each apparatus? Which skills are hardest? How to tell good routines from great? You’re in the right place.

Here, we’ll look at the floor exercise — starting with the basics and then moving into technical details. Choose a quick primer or go as deep as you want. We also have guides to the vault, uneven bars and balance beam.

A standard floor mat is about 40 feet by 40 feet, which makes the diagonal paths along which gymnasts tumble about 56 feet. It’s made of foam and carpeting, with springs that allow gymnasts to do difficult skills more safely.

Every routine must include:

A flip with at least a 360-degree twist

A double back flip, with or without twists

Two leaps or hops in succession, either directly connected or with running steps in between. One of the two must involve a 180-degree split.

Floor routines, set to music of the gymnast’s choice (no lyrics allowed), last about 90 seconds and usually include four tumbling passes. Gymnasts will generally do their most difficult passes first.

Unlike the vault, which is about pure power, the floor exercise combines power with artistry. In practice, some gymnasts put less effort into their choreography, which can be little more than a series of poses nominally timed to the music, and judges can deduct for that.

But when a gymnast really puts on a performance, you can tell. Look no further than this routine from Brooklyn Moors of Canada.

What the gymnasts do

Each skill has a difficulty rating from A through J. Gymnasts get credit for their eight hardest skills, of which at least three must be acrobatic and three must be dance.

Backward tumbling passes start with a roundoff (basically a powerful cartwheel in which both feet land at once), almost always followed by a back handspring to build momentum for the main skill.

The most common passes fall into a few categories:

Double backs, short for double back flips. Flips can be done in three positions — tuck, with knees bent; pike, with legs straight and hips bent; or layout, with the body straight — but in gymnastics parlance, “double back” refers to the tucked version. The others are specified as “double pike” and “double layout.”

Twists, which refer to a single back layout with one to 3.5 twists. The ones you’ll generally see as stand-alone tumbling passes — as opposed to part of combination passes, which we’ll get to later — are double twists (C), two and a half twists (D, often followed immediately by a front flip), triple twists (E, sometimes called triple fulls) and occasionally three and a half twists (F).

Gymnasts tend to favor backward tumbling because it’s easier to generate momentum from a roundoff and back handspring than from a front handspring. Some excel at forward tumbling, though.

The double Arabian (E), a double front in which the gymnast starts out as though she’s doing a back flip but immediately does a half twist. It’s more popular than the regular double front because it’s worth the same but lets the gymnast build momentum with a roundoff and back handspring. A small handful of gymnasts do a piked double Arabian, or Dos Santos (F, named for Daiane Dos Santos).

Front twists, such as a front double full (D).

Gymnasts can increase their difficulty score by doing two skills in one tumbling pass, either directly or indirectly connected.

Floor routines aren’t required to include pirouettes, but you’ll still see lots of them, differing by leg position and number of rotations. Gymnasts can earn a 0.1 difficulty bonus for connecting two turns.

The simplest pirouettes are done with the nonsupporting leg bent, and if someone mentions a “turn” with no further specification, it’s probably that kind. Full turns and double turns are too simple to be valuable at the Olympic level, but some gymnasts do triple turns (C) or, rarely, quadruple turns (E, named for Elena Gómez).

You know those ugly, wobbly turns on beam where the gymnast spins in a squatting position with one leg extended to the side? They’re on floor too. The double wolf turn is a D and the triple wolf turn, named for Lauren Mitchell, is an E. Nobody likes them. Everybody does them anyway.

Leaps take off from one foot and travel forward, while jumps take off from both feet and move only up and down. Leaps are more common because they generally have higher difficulty values, and routines have to include a series of at least two.

Common leaps include the full-twisting split leap (C, sometimes called a tour jeté half), switch leap (B, like a split leap except the gymnast switches the direction of her legs in midair) and switch ring leap (C, a switch leap with the rear leg bent upward, back arched and head thrown back).

Jumps often come into play at the end of tumbling passes, because gymnasts can earn a 0.1 difficulty bonus for doing a jump immediately after landing a pass.

Some gymnasts work acrobatics or break-dancing moves into their choreography — like, for example, Claudia Fragapane of Britain from roughly 0:53 to 1:10 in this routine. This doesn’t count toward the difficulty score; it’s there for the artistry and performance value.

Gymnasts’ final marks are the sum of a “D score” (difficulty) and an “E score” (execution).

The D score has three components.

Composition requirements: Each of the four requirements — a flip with at least a full twist, a double backflip with or without twists, both backward and forward tumbling, and at least two leaps in succession — is worth 0.5.

Skills can be downgraded if gymnasts don’t complete them properly. For instance, if a gymnast attempts a triple twist but only completes 2.75 rotations, the judges may credit only the difficulty of a two-and-a-half twist.

The execution score starts at 10, and judges take deductions ranging from 0.1 for flexed feet in a leap to 1.0 for a fall.

Because there are so many possible deductions — landings, body position in the air, control in pirouettes, the admittedly subjective measure of insufficient artistry — and because small deductions add up quickly, it’s normal for even an excellent floor routine to receive an execution score in the eights.

Gymnasts also receive “neutral” deductions — subtracted from the sum of the D and E score — if they go outside the 40-by-40-foot bounds of the floor, as marked by lines or a change in color. (The lines themselves are in bounds.) One foot out of bounds is a 0.1 deduction, and both feet out is a 0.3 deduction.