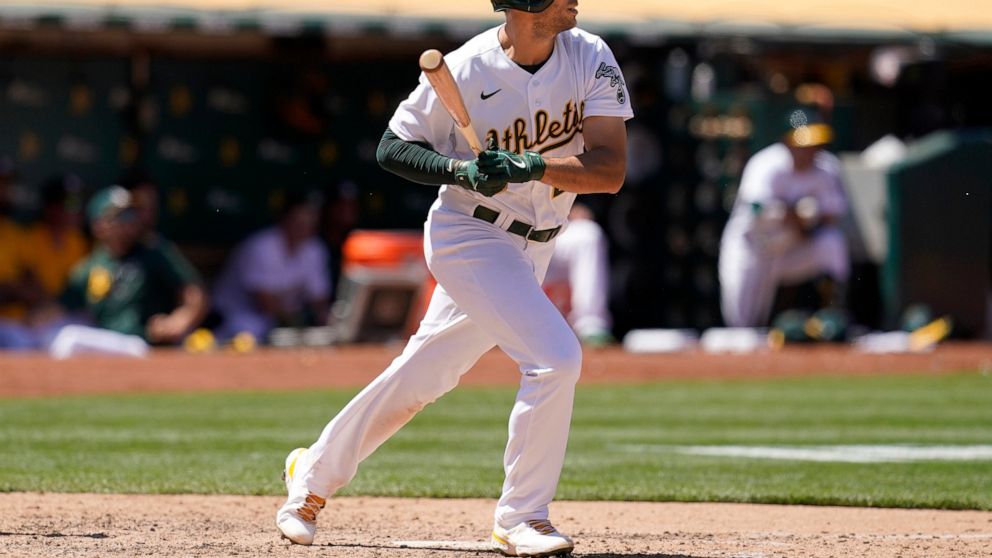 Added A’s manager Bob Melvin: “He seems to be finding another gear. In a year when he gets an opportunity to seize a starting job, not only has he pitched well, he’s gotten better as we’ve gone along and seems to come up big in big situations.”

Olson put Oakland on the board with a homer in the fourth inning, his 25th of the season to tie Kyle Schwarber for fourth most in the majors. He later added an RBI single.

A day after two-way All-Star Shohei Ohtani blanked the A’s for six innings — only to see the bullpen allow a three-run homer following his departure — he was shut out at the plate, going 0 for 3 with three strikeouts and a walk. The Angels left 10 runners on base, finishing the game 0 for 9 with runners in scoring position.

The Athletics scored three runs in the sixth inning on a sacrifice fly by Jed Lowrie and a two-run double from Ramón Laureano. Elvis Andrus and Olson tacked on RBI singles in the seventh.

Los Angeles manager Joe Maddon was ejected before the bottom of the eighth for arguing with home plate umpire Bill Miller.

“Truth be told, he did say something to one of my guys that I didn’t like and he needed to hear about it,” Maddon said. “No different than good parenting.”

A’s rookie Jacob Wilson recorded his first career hit, a single to center field in the sixth inning. The 30-year-old made his major league debut on July 10 after spending more than eight seasons in the minors.

“It’s been a long time coming for me after spending 10 years trying to get to this situation and put myself in a situation where I can kind of make this dream happen,” Wilson said. “So to go out and get the first hit out of the way, words don’t really describe the feeling you get from that.”

The Oakland City Council on Tuesday approved its proposed term sheet for the Athletics’ new ballpark project at Howard Terminal in Jack London Square, though the A’s did not agree to the terms. The non-binding 6-1 vote, with one abstention, allows the two sides to continue negotiating if they choose.

“Based on our extensive negotiations, shared values and shared vision, we believe the A’s can and should agree to the terms approved by City Council today,” said a joint statement from Oakland Mayor Libby Schaaf, Council President Nikki Fortunato Bas and Vice Mayor Rebecca Kaplan.

“To vote on something that we have not really been privy to or had time to digest is just a difficult thing for us and it’s hard to understand how that’s a path forward,” Kaval said.

Angels CF Mike Trout ran the bases for the first time since going on the injured list with a right calf strain on May 18. Trout was moved to the 60-day IL on June 28. … LF Justin Upton (lower back strain) began a rehab assignment with Triple-A Salt Lake on Monday and homered in his first at-bat, finishing 1 for 3 with a walk. He was to start again Tuesday night for Salt Lake.

Athletics: LHP Sean Manaea (6-6, 3.28) will try to snap a four-game losing streak as Oakland begins a four-game series at Seattle on Thursday night. Manaea pitched a four-hit shutout in his last outing against the Mariners on June 2.