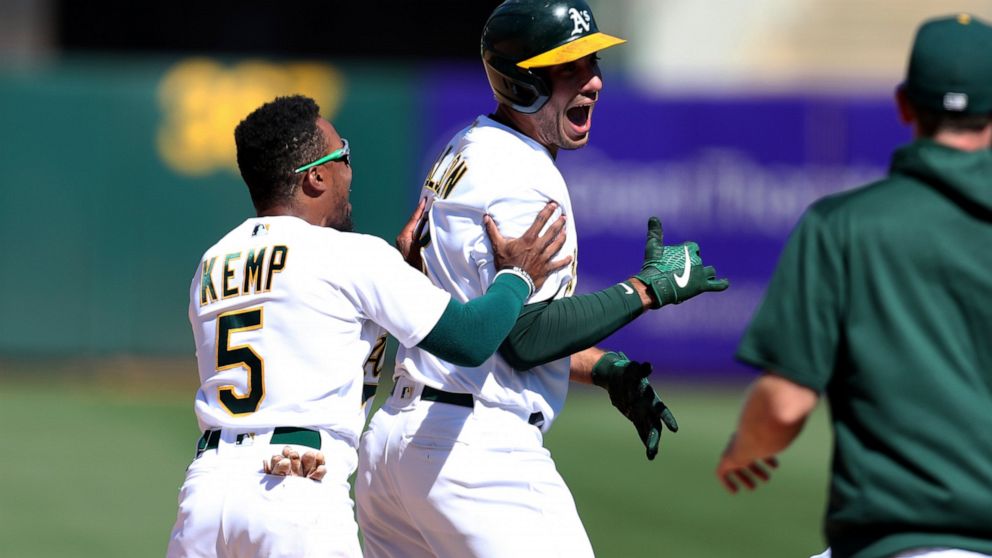 Matt Olson hit a two-run, walk-off double in the bottom of the 10th inning and the Oakland Athletics rallied past the San Diego Padres 5-4

OAKLAND, Calif. — Matt Olson hit a two-run, walk-off double in the bottom of the 10th inning and the Oakland Athletics rallied past the San Diego Padres 5-4 on Wednesday.

The A’s scored twice in the ninth with two outs off closer Mark Melancon to tie it at 3.

After San Diego scored a run in the top of the 10th off Lou Trivino (4-4) to take a 4-3 lead, Olson came to the plate with runners on the corners and no outs.

Olson laced the first pitch he saw from Tim Hill (5-6) off the right field wall, scoring Mark Canha and Starling Marte, and sending the Oakland Coliseum into a frenzy.

The Padres carried a 3-1 lead to the ninth, but Melancon couldn’t convert the save, surrendering two-out, RBI singles to Matt Chapman and Yan Gomes.

Jed Lowrie hit a solo homer in the A’s second. San Diego answered with a run in the third and two in the fourth, getting RBI hits from Adam Frazier, Trent Grisham and Victor Caratini.

DAVIS BACK WITH A’S

Before the game, Oakland signed veteran DH Khris Davis to a minor league contract. The 33-year-old spent five seasons with the Athletics, hitting 158 home runs, before being traded to the Texas Rangers last offseason. He was designated for assignment in June after batting .157 with two homers and five RBI in 22 games.

“We love having him back in the organization,” A’s manager Bob Melvin said. “It’s giving an opportunity for him to get back to where he was in the past.”

Davis surpassed the 40-homer mark in three straight seasons from 2016-18, including a league-high 48 in ’18. He signed a two-year, $33.5 million contract extension in ’19 but struggled with injuries and performance the next two years. Still, Melvin is hopeful Davis can regain his form.

“It’s not like he’s 40 years old,” Melvin said. “We signed him back with the hope and intent that he starts hitting some longballs and maybe can help us out here at some point.”

Davis was assigned to the Athletics’ Arizona Complex League roster.

Padres: RHP Dinelson Lamet (right forearm inflammation) is scheduled to begin a rehab assignment with Low-A Lake Elsinore on Wednesday night. Lamet has been on the injured list since June 27, his third IL stint of the season.

Athletics: RHP James Kaprielian (right shoulder impingement) played catch before Wednesday’s game and could start Sunday against Texas. “It’ll either be he or Daulton (Jeffries), depending on how he feels,” Melvin said. “But he felt a little bit better today.”

Padres: LHP Ryan Weathers (4-3, 3.65 ERA) looks to bounce back from a rocky outing as San Diego welcomes the Arizona Diamondbacks for a three-game series beginning Friday night. He allowed eight earned runs in four innings last Friday in a 9-4 loss to the Colorado Rockies.

Athletics: RHP Chris Bassitt (11-3, 3.28) takes aim at an AL-leading 12th win Friday night as Oakland hosts the Texas Rangers for a three-game series. Bassitt is 3-0 with a 0.86 ERA against Texas this season.