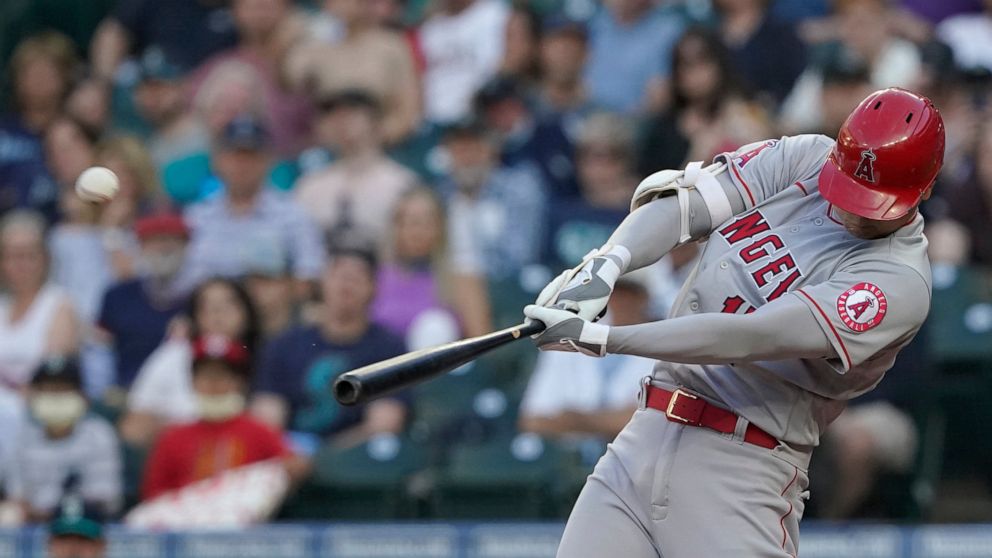 Shohei Ohtani became the sixth player to reach the upper deck of T-Mobile Park with a majestic blast for his 33rd homer, but Mitch Haniger’s two-out grand slam in the eighth inning lifted the Seattle Mariners over the Los Angeles Angels 7-3

SEATTLE — Shohei Ohtani became the sixth player to reach the upper deck of T-Mobile Park with a majestic blast for his 33rd homer, but Mitch Haniger’s two-out grand slam in the eighth inning lifted the Seattle Mariners over the Los Angeles Angels 7-3.

Ohtani had the most memorable shot of the night. Haniger hit the most important.

Haniger drove a 2-0 pitch from Jose Quintana (0-4) into the left-field bullpen to cap Seattle’s rally from a 3-0 deficit. Seattle kept the inning alive thanks to Jake Bauers hit and J.P. Crawford’s nine-pitch walk.

The Angels had a 3-0 lead thanks to Ohtani’s homer off starter Marco Gonzales that soared into the top deck of right field. MLB’s Statcast projected the homer at 463 feet.

The estimate seemed conservative based on the ball landing above the fifth row of seats before hitting a concrete wall and ricocheting back down into the lower levels. It left the ballpark buzzing and his teammates — particularly Justin Upton — in disbelief in the Angels dugout.

A few fans sitting alone in the 300 level who said they wanted a peaceful place to watch the game while looking at the Seattle skyline suddenly had to duck out of the way as Ohtani’s blast reached a rarified section of the ballpark.

Ohtani leads the majors in homers, and this drive came three days before he’s set to appear in Monday’s All-Star Home Run Derby at Coors Field.

Unfortunately for Ohtani, the blast was somewhat muted by Seattle’s comeback.

Shed Long Jr. barely missed a home run and settled for a two-run double off the top of the wall in the fourth inning off Angels’ starter Alex Cobb. Seattle finally pulled even on France’s two-out RBI single in the seventh off Steve Cishek.

Aside from the two homers, Gonzales rebounded well from an ugly outing in his last start. Gonzales allowed three runs and seven hits in 5 2/3 innings and threw a season-high 103 pitches.

Drew Steckenrider (3-2) pitched the eighth for the victory.

David Fletcher led off the game with his first homer of the season, extending his hitting streak to 22 games, the longest for an Angels player since Garrett Anderson in 2008.

Mariners LHP Hector Santiago had the appeal of his 10-game suspension for using a grip-enhancing foreign substance heard on Thursday. The hearing lasted several hours and Seattle manager Scott Servais said Santiago was told a decision should come the middle of next week.

Angles: Mike Trout will continue his rehab work through the All-Star break with more clarity on a rehab assignment likely coming out of the break, manager Joe Maddon said. Trout has been out since mid-May due to a calf injury. … Upton was with the team in Seattle, but Maddon said he is not expecting Upton to be activated from the injured list this weekend.

The Angels recalled IF Kean Wong from Salt Lake and optioned RHP Aaron Slegers to Salt Lake. Maddon wanted the extra position player for the final series before the break.

Angels: LHP Patrick Sandoval (2-2, 3.86) makes his ninth start of the season and second against the Mariners. Sandoval threw six innings and struck out 10 but took the loss against Seattle on June 6.