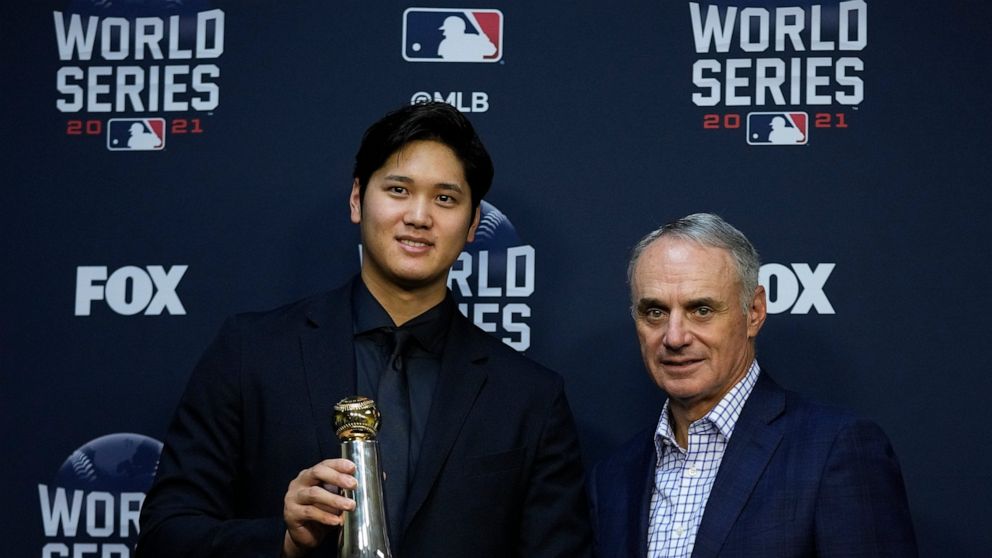 HOUSTON — Shohei Ohtani’s two-way All-Star season with the Los Angeles Angels was so unprecedented that MLB Commissioner Rob Manfred created a special award to recognize it.

Manfred presented Ohtani with a Commissioner’s Historic Achievement Award before Game 1 of the World Series on Tuesday night.

“Over the next few years, I know that there are going to be many, many awards and accolades that come your way,” Manfred said, with Ohtani sitting next to him. “But I felt that 2021 was so special that it was important to recognize the historic achievement that took place in 2021 with an award just about 2021.”

This 27-year-old Ohtani is the most accomplished two-way player since Babe Ruth, who last pitched regularly in 1919. Ohtani was the first two-way starter in the history of the All-Star Game, which began in 1933. While pitching for the American League, he also hit in the leadoff spot as the designated hitter.

“This award is not given out every year, so I know how special it is,” Ohtani said through his translator. “I’m not fully sure if I really deserve it, but since Mr. Manfred’s going to give it to me, I’m going to accept it.”

Manfred quickly responded that he did deserve the first such award presented by the commissioner in his six seasons.

After missing all of 2019 on the mound following Tommy John surgery, and pitching only twice last season, Ohtani threw 130 1/3 innings this year. The right-handed pitcher had thrown only 53 1/3 innings in 12 MLB starts before this year, 10 of those as a rookie in 2018.

Ohtani said he never felt tired or exhausted and was already ready to get going with his offseason workouts and throwing program.

“I think the biggest thing I could take from this season was that I was able to finish the season without getting hurt or being on the IL,” he said. “So this experience is definitely going to help me out going forward.”

Asked about his confidence of being able to maintain his level of play, Ohtani said he feels “pretty confident” that he could repeat what he did this year.

“It’s really extraordinary to find a human being who can perform at the highest level in Major League Baseball as both a pitcher and a position player. It takes courage and fortitude not to make the choice that players traditionally make (to be a pitcher or hitter), and it takes tremendous endurance to do both over the course of what is a grueling 162-game schedule,” Manfred said. “In 2021, that extraordinary person came to us, and it was Shohei Ohtani.”