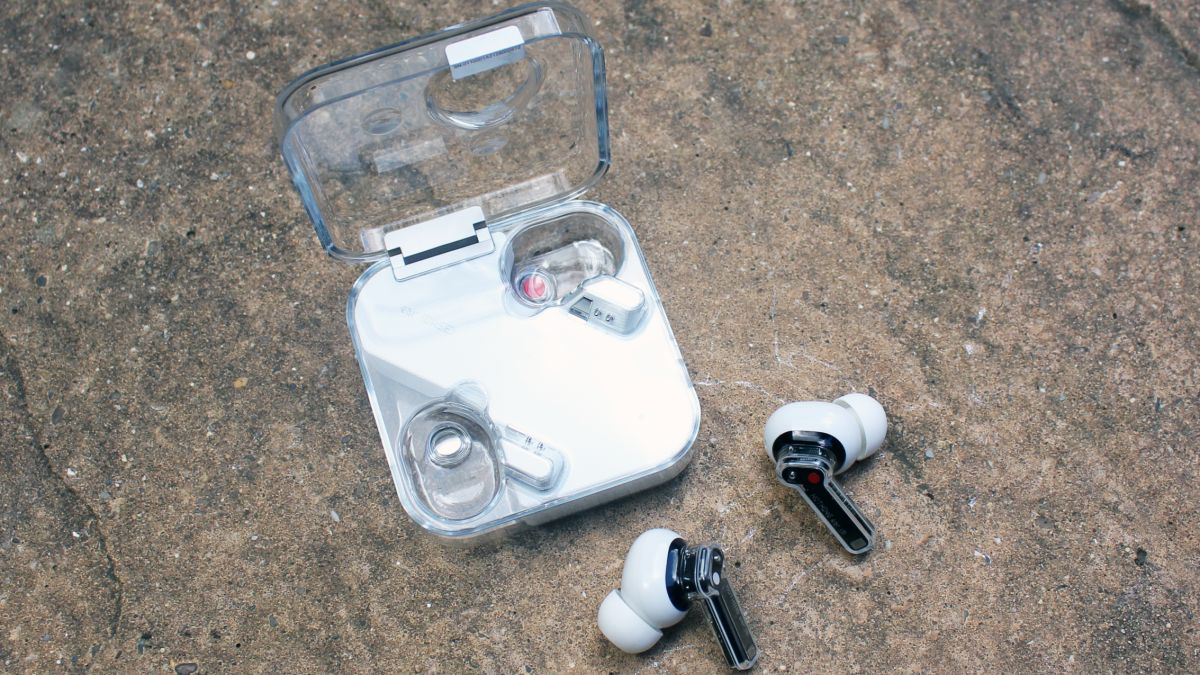 The Nothing Ear (1) burst onto the market after months of hype – the first true wireless earbuds from OnePlus co-founder Carl Pei’s new company, they’ve been pitted as a more affordable rival for the Apple AirPods Pro.

Unfortunately, the Ear (1) haven’t quite lived up to the hype. While they do boast a unique transparent design, which shows off the inner workings of the earbuds and charging case, Nothing hasn’t taken the concept far enough for the wireless earbuds to really make an aesthetic impact.

Sure, you can see the circuit boards inside the earbuds’ stems, but large portions of the buds and charging case are housed in opaque white plastic, which detracts from the overall look.

Saying that, the Nothing Ear (1) are immensely comfortable to wear, and their touch controls are reliable and responsive.

The audio performance is nothing to write home about, either. With large drivers made in collaboration with Swedish audio company Teenage Engineerings, we were expecting an impressive soundstage from the Nothing Ear (1).

Instead, we found the buds to be tinny, and frustratingly quiet – though we appreciated the amount of detail in the higher frequencies.

The noise cancellation provided by the Ear (1) leaves a lot to be desired, too. With the ANC on its highest setting and our music playing at full volume, we were still able to hold a conversation with someone in the same room, and we could hear every click-clack of our laptop’s keyboard.

Battery life, on the other hand, is pretty good. You get about 34 hours in total with ANC switched off (that drops to 24 hours with ANC on), which is pretty impressive for a pair of true wireless earbuds.

You can easily see how much battery you have left via the accompanying app, and the charging case supports wireless charging.

Connectivity could be better, however. While the earbuds come with Bluetooth 5.2 support, we encountered lots of issues with pairing the Ear (1), and experienced infrequent (but irritating) connectivity dropouts.

Overall, the Nothing Ear (1) are a bold first release from the new company – but an interesting design isn’t enough to save these earbuds if they can’t get the basics right.

We’d much prefer a pair of boring-looking buds that sound fantastic, provide excellent noise cancellation, and offer reliable connectivity – and we certainly wouldn’t recommend them as a cheaper alternative to the AirPods Pro.

Nothing Ear (1) price and release date

If you miss out on that first opportunity to buy the new earbuds, they’ll go on sale more widely on August 17.

That price puts the Nothing Ear (1) at the lower end of the price scale for noise-cancelling wireless earbuds – they’re cheaper than the Sony WF-1000XM4 and the Apple AirPods Pro, for example.

There are cheaper true wireless earbuds with ANC out there, like the EarFun Air Pro, but high quality models at this price are few and far between.

The design of the Nothing Ear (1) true wireless earbuds was always going to be divisive, and you’ll either love it, or hate it.

Like the Nintendo Gameboy Pocket and the Apple iMac G3, the whole design aesthetic of the Nothing Ear (1) is based on the idea of transparency – and as such, the earbuds and charging case are nearly entirely see-through, save for the bottom of the charging case and the housings of the earbuds, which are both solid white.

The earbuds themselves look as if someone has taken the AirPods Pro and stripped the coating off of the stems, with silicone eartips and ovaloid housings that are reminiscent of Apple’s noise-cancelling buds.

The transparent covers on the stems reveal some of the earbuds’ inner workings, including the circuits boards and magnets – it’s a cool feature if you’re into tech being fully on display, but those who prefer a sleeker aesthetic will probably want to look elsewhere.

The earbuds’ stems are touch sensitive, allowing you to control your music playback and settings without digging out your phone.

It’s a double tap to play/pause your music, a triple tap to go to the next track, tap and hold to switch between the noise cancellation modes, and you can slide your finger up or down the stem to adjust the volume of your content.

We found the controls worked very well, and were very responsive – and there’s also a handy auto-pause feature, so simply taking out your earbuds will stop your music automatically. Saying that, sliding our finger up and down the stem was a little fiddly, and it sometimes felt like this action would make the earbuds fall out.

The charging case is square and flat, with a flip-top design that closes with a satisfying snap. It’s much larger than the case you get with the Apple Airpods, but the top does come with a pleasing indent that you can fit your thumb into – and if you’re so inclined, this allows you to flip the case around in your hand, a little like a fidget spinner.

You’ll notice that each earbud slot features a colored dot (red or silver) – these dots correspond to the dots on the back of each earbuds’ stem, letting you know at a glance which bud goes into which slot.

A handy, if not totally necessary feature, seeing as you won’t be able to fit each earbud into its sibling’s slot anyway.

On the right side of the charging case you’ll find a pairing button and a USB-C charging slot, though you can top it up wirelessly if you wish.

There’s been so much hype around the transparency of the Ear (1), that it’s a little disappointing that the company didn’t pull off an entirely see-through design – if Nothing wants us to see the inner workings of the earbuds, why not expose it all?

We can see the magnets, microphones, and circuit board, but (except for the circuit board) that’s not exactly unusual.

As we said, it’s a ‘love it or hate it’ situation. We’re not entirely convinced that Ear (1) successfully show off the “raw beauty” of the technology inside true wireless earbuds, like Nothing claims, but they certainly offer something different to anyone who’s bored of more conventionally-designed earbuds.

Inside the Nothing Ear (1) are 11.6mm drivers – quite large for true wireless earbuds – that have been tuned by audio company Teenage Engineering.

Larger drivers like these tend to displace lots of air, which in turn provides a strong sound with powerful bass frequencies – unfortunately, we didn’t think the Ear (1) quite lived up to Nothing’s claims that they would provide a “rich, immersive sound”.

That’s not to say that the Ear (1) sound terrible – they provide a good amount of detail in the trebles, and mids sound clear and smooth – but the bass is very underwhelming, and the earbuds don’t get particularly loud.

You can boost the lower frequencies by turning on the More Bass preset in the app, but we found it didn’t have a huge effect.

Listening to Spelling’s Little Deer, and the rumbling piano chords provided a solid bedrock of sound for the interweaving string melodies, with lots of clarity in the pizzicato violins and chimes.

We’d have liked more warmth from the low frequency instruments, though we felt the vocals sounded rich and luxurious. The soundstage didn’t feel particularly wide, and the overall profile felt a bit tinny.

It was the same story as we listened to Kimbra’s Cameo Lover. The earbuds were frustratingly quiet, even turned up at full volume. Again, there’s a good level of clarity and detail in the treble frequencies, but the rest of the soundstage sounded disappointingly recessed in comparison.

Switched onto Light, and the ANC may as well not be on at all. The Transparency mode isn’t much better – it didn’t feel as though the sound of our surroundings was being fed into the earbuds, though high frequency sounds did become a little clearer.

The Nothing Ear (1) boast a 5.7-hour battery life from the earbuds themselves, with a further 28 hours provided by the charging case – that’s a total battery life of about 34 hours, though this drops to 24 hours if you’re using ANC.

If you need to quickly top up your buds, a swift 10-minute charge of the case will give you eight hours of playback – enough to get you through a work day.

You can charge the case wirelessly with a Qi-compatible mat, or via the USB-C port.

Connectivity comes courtesy of Bluetooth 5.2, with support for SBC and AAC codecs, and Nothing claims that the earbuds support fast pairing – so you’d think that hooking them up to your device would be easy.

Unfortunately, that wasn’t our experience. While our first time connecting the Nothing Ear (1) was relatively pain-free, subsequent attempts were less straightforward.

Connecting the earbuds via our phone’s Bluetooth settings seemed to be successful initially, but we soon discovered that music wouldn’t play through them.

After unsuccessfully trying to connect them via the Nothing app, we had to put the earbuds back in the charging case, hit the pairing button, and try connecting them using the phone’s Bluetooth settings once more.

This worked – but once we got our music playing again, it started cutting out randomly. And that was our experience throughout the time we spent with the Nothing Ear (1).

These connection dropouts never lasted long, but they were frequent enough to become irritating – and every time it happened, we’d have to open up Spotify and hit the play button again.

The accompanying app lets you see how much battery life you have left, as well as toggle through the noise cancellation modes and equalizer presets and assign the touch controls to different actions.

You can also use the app to ‘ring’ your earbuds if you’ve lost them, and download firmware updates.

You want your earbuds to stand outThe transparent design of the Ear (1) means they’ll stand out from the true wireless crowd.

You want comfort above all elseThe Ear (1) are supremely comfortable to wear, and come with a range of silicone eartips.

You’re looking for great audio qualityThe Nothing Ear (1) aren’t the best-sounding buds you can buy.

You want strong noise cancellationIf you want to block out the world around you, you’d be better off saving up for a pair of AirPods Pro, or the Bose QuietComfort Earbuds.