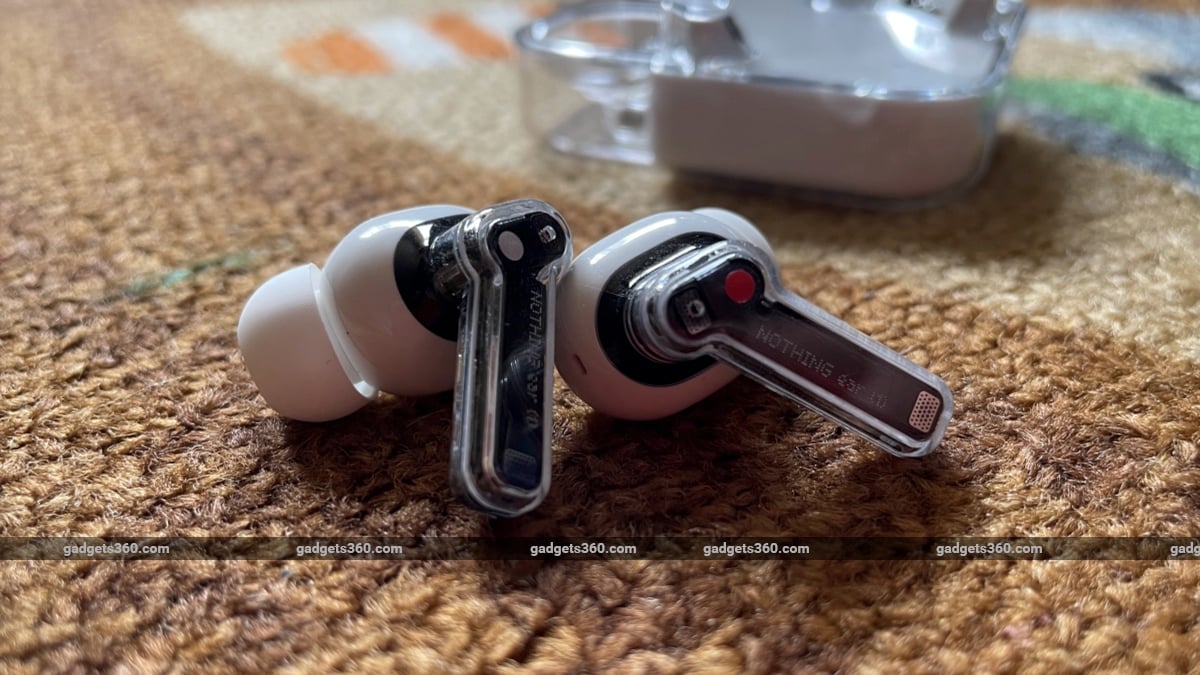 Whether in India or beyond, hype sells. However, in order to build up enough hype to make enough people pay attention, you still need your product to be impressive, particularly at first glance. OnePlus has pulled off the hype and marketing game successfully for many years, with much credit for this going to the company’s co-founder Carl Pei. After many years building OnePlus from a small enthusiast brand to a major global premium smartphone maker, Pei recently left the company to start something new in the consumer electronics space. That something is called Nothing.

Following months of teasers and concept renders to build up the hype, Nothing has launched its first product – the Nothing Ear 1 true wireless earphones. Priced at Rs. 5,999 in India, these true wireless earphones promise a lot by way of design, specifications, and features, particularly the transparent case and earpieces. How do they perform, and are these earphones worth the price? Find out in this review.

See-through charging case and earpieces on the Nothing Ear 1

In much the same way that the OnePlus One started out with offering premium design and specifications for a firmly mid-range price, the Nothing Ear 1 is an impressive offering on paper that doesn’t cost a lot of money. Much of its impact comes from design, particularly the transparent stalks and charging case of the Nothing Ear 1. This isn’t the first time transparency has been used as a differentiator, but it’s very well executed on the Ear 1.

The earpieces of the Nothing Ear 1 look nothing like the early concept renders we saw, but this isn’t a bad thing at all. The finished product retains transparent plastic, although it is limited to just the stalks of the earpieces; the casings are opaque. Nothing has gone with in-canal ear tips for a snug and noise isolating fit. You can see the internal components, the microphones, and the Nothing Ear 1 logo inside the stalks. Each earpiece weighs a convenient 4.7g, while the charging case weighs 57.4g.

While most earphones have distinct ‘L’ and ‘R’ markings to point out which earpiece goes where, the Nothing Ear 1 uses colour coding instead. A red dot signifies the right earpiece, while a white dot signifies the left. This might take a bit to get used to, but I eventually got accustomed to the design and colour coding system.

The outer sides of the stalks on each earpiece are flat and touch-sensitive for controls. The upper part – the area surrounding the colour dot – is sensitive to taps to control playback as well as ANC and hear-through modes. Swiping up and down on the long part of the stalk on either earpiece controls the volume. While the volume and play/ pause/ call answer controls are not changeable, triple-tap and long-press gestures can be customised through the companion app.

The charging case of the Nothing Ear 1 is quite large, with a 570mAh battery and plenty of empty space

The charging case of the Nothing Ear 1 looks as impressive as the earpieces, if not more so. The lid is entirely clear, as is a part of the bottom. Running diagonally down the middle of the case is the actual hardware: the battery, charging points, and circuitry. The earpieces latch onto the case magnetically and at an angle, and indentations on the lid hold them in place when closed. On the side of the case are the USB Type-C port for charging and the pairing button.

Usefully, there’s also Qi wireless charging on the case. However, the sheer size of the 570mAh battery and the generous amount of empty space on the inside make the case rather large, and not very pocketable. This won’t be too much of a problem if you slip it into a backpack or purse, but it’s a bit too large to conveniently carry in a pocket along with other things such as a wallet or smartphone.

The Nothing Ear 1 app, available for iOS and Android, lets you customise and control certain settings and features of the headset, as well as update its firmware. You can switch between ANC and transparency modes, choose either of two noise cancellation intensity levels, and adjust the equaliser preset for the sound.

You can also adjust the gesture controls, turn on or off the in-ear detection, loudly ring the earpieces when in Bluetooth range to help you find them, and check the battery levels of the earpieces and charging case individually. It’s a useful, well-designed app that I quite enjoyed using. It’s worth mentioning here that there’s no support for voice assistants on the Nothing Ear 1, which is quite disappointing.

The Nothing Ear 1 has 11.6m dynamic drivers, and uses Bluetooth 5.2 for connectivity with support for the SBC and AAC Bluetooth codecs. The earpieces are IPX4 rated for water resistance. Nothing claims up to 40db of noise level reduction using the active noise cancellation. Google Fast Pair is claimed to be supported, but I wasn’t able to use this to pair my review unit with an Android device. The sales package includes a charging cable with a transparent outer coating, and a total of three pairs of silicone ear tips including the medium-sized tips already attached to the earpieces.

Battery life on the Nothing Ear 1 is decent enough for the price, with the earphones running for around four hours per charge with the ANC on and the AAC Bluetooth codec in use. The charging case added an impressive five additional full charges for a total battery life of around 23-24 hours per charge cycle.

There’s also fast charging when using a cable to charge the case, with Nothing claiming a little under an hour of listening with ANC on with 10 minutes of charging of the earpieces. 10 minutes of charging for the case promises around six hours of listening for the earpieces with ANC on, with the earphones charging quickly inside the case while it’s plugged in. As with most true wireless earphones, even connecting the cable to the USB port of your laptop is enough to quickly charge the case.

The Nothing Ear 1 is an all-rounder

The most striking aspect of the Nothing Ear 1 is its design, but that isn’t all these earphones are about. With decent sound quality and active noise cancellation performance, the Nothing Ear 1 offers a wholesome and all-round experience for the price. Although there is no support for advanced Bluetooth codecs, and better-sounding earphones are available at around the same price, the overall experience comes together quite well.

I had the Nothing Ear 1 paired with an Apple iPhone 12 mini (Review) for much of the review, listening to music and audiobooks, as well as taking calls during my daily exercise routine. Although I sometimes felt that the earphones didn’t get loud enough even at the highest volume, particularly when listening to audiobooks, they performed equally well in all situations.

Starting with music, I listened to Je M’amuse by Caravan Palace, and what immediately struck me was the balanced, spacious sound from the Nothing Ear 1. The retro-sounding introduction to this track was nicely detailed, quickly giving way to the gentle, refined electronic bass. The different styles and elements in this track played well together, with frequencies across the range sounding detailed and clean throughout.

The entire outer side of each earpiece is touch-sensitive, and can be used to control playback and volume on the Nothing Ear 1

Even the faint details in this track were easy to pick up, as were the infrequent but peppy vocals. Its busy and lively nature demanded detail, balance, and cohesiveness, which the Nothing Ear 1 largely delivered without much trouble at all. This was also audible with tracks such as the cheerful sample-based Subways by The Avalanches, with which the Nothing Ear 1 was able to use its excellent soundstaging and detail to bring out the true mood and feel.

That said, listeners looking for outright attack and aggression might not find the balanced nature of the sound very attractive. The earphones do seem to have some flexibility in adjusting to the nuances of various tracks, but not to as impressive a degree as I’ve heard on high-end options such as the Apple AirPods Pro.

Although the AAC codec’s natural limitations may be a big part of the reason for this, the single dynamic driver in each earpiece also can’t quite match up to what the (more expensive) Oppo Enco X manages to achieve with its dual-driver setup and Dynaudio tuning. There’s a lot to like about the Nothing Ear 1, especially given its very competitive pricing in India, but comparisons with more expensive options will see it falling short.

Active noise cancellation on the Nothing Ear 1 is customisable, with two intensity levels to choose from. While many people might prefer the milder setting for generally quiet environments, I much preferred the full intensity setting. The quality of the ANC on the earphones is very good for the price, nearly matching up to more premium options such as the Oppo Enco X and Soundcore Liberty Air 2 Pro in reducing both indoor and outdoor noise.

Although comparisons to more expensive true wireless headsets will see the Nothing Ear 1 fall short, it’s still a very good pair of earphones for its price of Rs. 5,999

The noise cancellation had a gentle but effective approach, making a noticeable difference in reducing sounds such as air conditioners and ceiling fans, as well the general hum of the urban outdoors. The transparency mode was very good as well, offering a natural and subtle hear-through, much unlike the excessive hear-through I’ve heard on most true wireless earphones across price segments.

Call and connection quality on the Nothing Ear 1 was very good as well, and I had no trouble using these earphones for calls both indoors and outdoors. Connection stability was good at distances of up to 12 feet or so from my paired phone, and I didn’t have any trouble even when moving between rooms.

Despite this being its first product, Nothing has done exceptionally well with the Ear 1 true wireless earphones. There’s little to complain about – this headset offers balanced and detailed sound, good active noise cancellation, decent features, and excellent design, all at a very competitive price of Rs. 5,999 in India. If you’re shopping for mid-range true wireless earphones, this should be high on your list of options to consider.

There are better-sounding options available at similar prices right now, such as the Lypertek Tevi and Samsung Galaxy Buds+, but the Nothing Ear 1 offers better design and features, plus active noise cancellation, making it the more attractive overall package for most users with a budget of Rs. 7,000 or less.