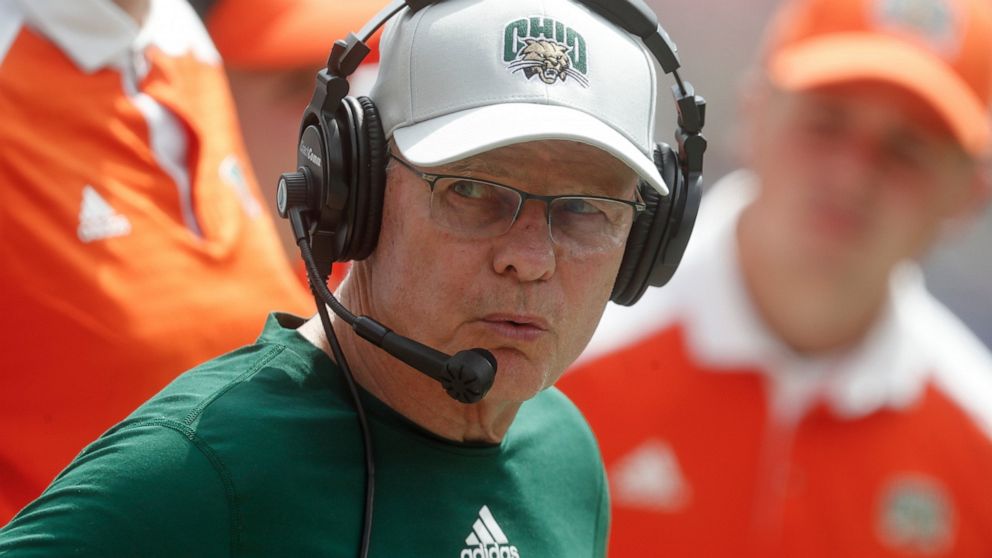 Solich announced his retirement Wednesday, stepping away from coaching after a 55-year career because of a health issue he initially thought he could work through.

“At first there was a little bit of denial about it, then I thought, ‘Well, hey, you’re feeling pretty good, despite what they’re saying, and you can keep going,’” he said on a Zoom call with reporters. “I came to my right senses pretty quickly on that end of it, and knew that our players deserved more than I was going to be able to give to them coming down the stretch here.”

Solich retires as the winningest head coach in the history of the Mid-American Conference with 115 victories. Including his time at Nebraska, his alma mater, Solich is 173-101 as a college coach.

He is stepping down less than two months before the start of the season and his 77th birthday. He was the oldest active head coach in major college football.

There will be no search for Solich’s replacement at Ohio. Offensive coordinator and associate head coach Tim Albin was promoted to head coach and received a four-year contract.

“I am forever indebted to Coach Solich for all that he has offered me and taught me through the years, and I know he will always be part of our program,” Albin said.

Nebraska and Ohio were the only two schools Solich worked as a college coach. Ohio had only two winning seasons in the previous 22 before he arrived.

“I wasn’t one to just look down the road for something else. When I take over a job, I took it over with the idea I was going to build this program and make it work,” Solich said.

Ohio went to 11 bowl games under Solich after going to only two before he arrived.

“We are so grateful for all that Coach Solich has given Ohio University, and especially, to our football program,” athletic director Julie Cromer said.

All five of the Bobcats’ bowl victories came during his tenure.

“Certainly staying 16 years was not a surprise to me,” Solich said. “I just felt like it made sense.”

Ohio won division titles and reached the MAC championship game four times under Solich. The Bobcats never did break through and win their first MAC title since 1968. Solich said some of those MAC championship losses will “haunt” him.

But the Bobcats never won more consistently than they did under the Cleveland native who played fullback at Nebraska in the mid-1960s at barely 160 pounds.

Solich became a high school coach in Nebraska after his playing days and joined Osborne’s staff in 1979 in time for the program’s best stretch. He was promoted to replace the Hall of Fame coach in 1998, with the Cornhuskers coming off a three national titles in four seasons.

Solich went 58-19 with the Huskers, but after Osborne’s long stretch of lofty achievements that wasn’t enough. Solich was fired after going 9-3 in the 2003 regular season. Nebraska’s last conference championship remains the Big 12 title it won in 1999 under Solich.

“I had no chip on my shoulder,” Solich said. “When I left Nebraska I knew I was a good football coach so I had nothing to gripe about on that end of it. They went a direction they felt they needed to go. It’s turned out well for me.