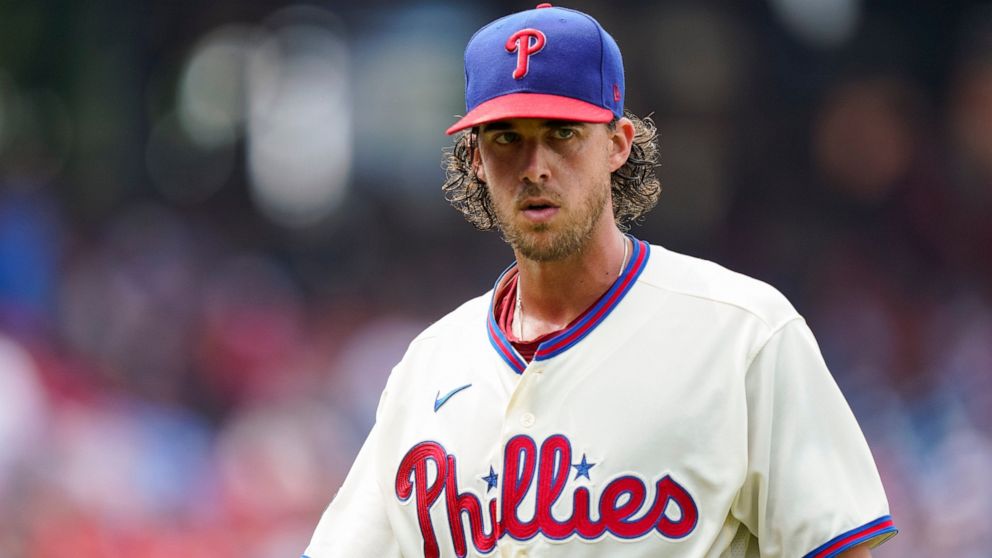 Aaron Nola allowed four hits and struck out nine, coming within one out of a shutout, and the Philadelphia Phillies edged the Atlanta Braves 2-1 to earn a split of their four-game series

PHILADELPHIA — Aaron Nola came within one out of a shutout, and the Philadelphia Phillies edged the Atlanta Braves 2-1 Sunday to earn a split of their four-game series.

Nola allowed four hits and struck out nine in 8 2/3 innings. Jean Segura hit a solo homer in the fourth and made a key defensive stop in the seventh that helped strand an Atlanta runner at third. Philadelphia infielder Ronald Torreyes homered in the eighth, and that proved critical when Atlanta’s Austin Riley went deep with two outs in the ninth to chase Nola.

Ranger Suarez got the final out for his fourth save of the season.

“I actually threw my best (game of the season) today,” Nola said. “I was more in sync with everything. And coming off a game like (Saturday’s 15-3 loss to Atlanta), it was especially big.”

The Braves wasted a strong start from right-hander Touki Toussaint, who allowed one run and five hits over seven innings while striking out 10. Riley had three of the four Atlanta hits, including two doubles.

Nola (7-6) had struggled since June 1 with a 6.10 ERA in his last eight starts before this one. He also missed two starts during that time due to contact tracing related to COVID-19.

On Sunday, he was effective early, getting light contact and strikeouts against a Braves lineup that had romped to 15 runs and 17 hits on Saturday night.

“That’s why he’s one of the better ones in the game,” Braves manager Brian Snitker said. “That was a good game. That’s an old-fashioned pitchers’ duel. You don’t see that too often.”

Eleven of Atlanta’s first 12 outs came from either strikeouts or plays made by Philadelphia infielders.

“It all started with the location of his fastball and it was really good today,” Phillies manager Joe Girardi said.

The biggest challenge for Nola came in the seventh. Riley lead off with a double to the gap in left-center field. However, he was unable to score when Segura’s diving stop and throw robbed Dansby Swanson of a hit for the first out of the inning. Nola got Abraham Almonte to pop out to shallow left, and Guillermo Heredia’s groundout to third ended the threat.

“That play was unbelievable,” Nola said. “That play gave me a chance to get out of the inning.”

Toussaint (1-1) matched Nola pitch for pitch for most of the afternoon. However, his lone mistake came when Segura led off the fourth by turning on an inside split-finger fastball and hitting it into the first row of the left-field bleachers for his sixth homer of the season for a 1-0 Phillies lead.

Torreyes added to the lead in the eighth when he hit his fourth homer of the year — this one coming off Atlanta reliever Chris Martin. That loomed large when Riley turned on Nola’s fastball for his 17th homer of the season to end the shutout bid. Suarez came in to strike out Swanson and end the game.

Braves: LHP Drew Smyly had no structural damage in his left knee that was injured in his start on Saturday night. He is currently day to day.

Braves: Open a five-game set at the New York Mets with a doubleheader on Monday. Kyle Muller (1-3) and Bryse Wilson (2-3) are set to start for Atlanta.

Phillies: Start a four-game home set against Washington on Monday. Spencer Howard (0-2) takes the mound against Joe Ross (5-8) of the Nationals.