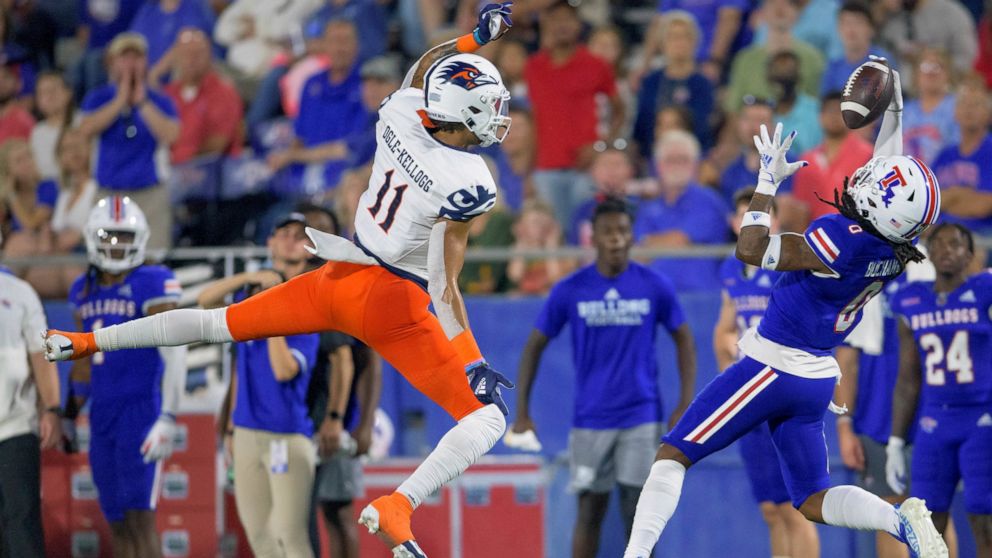 Frank Harris threw two touchdown passes to Zakhari Franklin and No. 24 UTSA celebrated its first national ranking with a 45-16 victory over Louisiana Tech on Saturday night

Harris was 12 of 20 for 193 yards, with scoring passes of 75 and 10 yards to Franklin, to help the Roadrunners (8-0, 4-0 Conference USA) extend their school-record winning streak to eight games.

Franklin had five catches for 118 yards, and Sincere McCormick ran for 113 yards and three touchdowns. Dadrian Taylor returned an interception 51 yards or a score.

Thing started well for the Bulldogs, with Smoke Harris hauling in a short crossing pattern and pulling away for a 47-yard touchdown play on the opening possession of the game.

UTSA needed just two plays and 36 seconds to respond, with Harris hitting a wide-open Franklin for the 75-yard score. The Roadrunners took a 14-10 lead on McCormick’s 2-yard run in he second quarter.

Harris and Franklin connected for another touchdown to help UTSA take a 21-10 halftime lead.

Bulldogs quarterback Austin Kendall entered the game with double-digit touchdown passes, but has been plagued by a bevy of interceptions. After his defense forced a three-and-out from UTSA to begin the second half, another errant throw crippled Louisiana Tech’s hopes.

Taylor’s 51-yard pick-6 quickly erased momentum the Bulldogs acquired and gave the Roadrunners an 18-point lead 2:16 into the second half.

McCormick ripped through the middle of Louisiana Tech’s defense for a 47-yard touchdown that put the game out of reach with 13:46 remaining.

Louisiana Tech fumbled the ensuing kickoff and the rout continued with another score from McCormick.