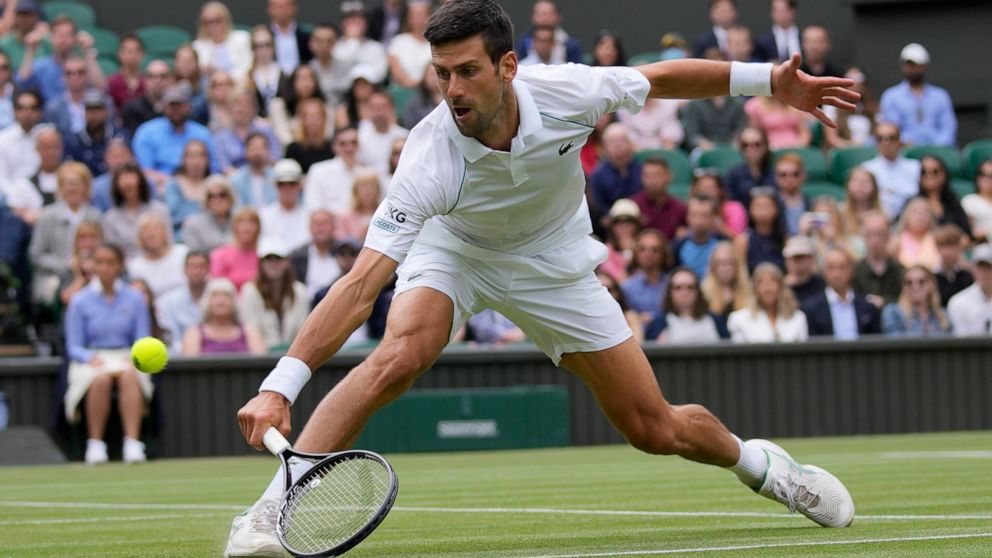 WIMBLEDON, England — For about 20 minutes Wednesday at Wimbledon, Novak Djokovic was not quite his indomitable, infallible self.

After racing to a 5-0 lead at the outset, he dropped three consecutive games to his unheralded quarterfinal opponent, 48th-ranked Marton Fucsovics. Wasted five set points in the process, too.

Soon enough, Djokovic righted himself, as he usually does, and beat Fucsovics 6-3, 6-4, 6-4 on a windy, overcast afternoon at Centre Court to reach his 10th semifinal at the All England Club and 41st at a major tournament.

That allowed the 34-year-old from Serbia to continue his pursuit of a sixth championship at Wimbledon — and what would be a third in a row — along with a 20th Grand Slam title overall, which would tie the men’s record currently shared by Roger Federer and Rafael Nadal.

And there’s this, too: Djokovic improved to 19-0 in matches at majors this season as he pursues the first calendar-year Grand Slam by a man since Rod Laver in 1969. Djokovic seized trophies on the Australian Open’s hard courts in February, on the French Open’s red clay in June and now seeks to add one on Wimbledon’s grass.

Djokovic — who finished with more unforced errors, 30, than winners, 23 — will face a first-time major semifinalist, No. 10 Denis Shapovalov of Canada, on Friday.

“Obviously, he’s the best player in the world,” Shapovalov said about the prospect of taking on Djokovic, “but I think anything is possible. And when you look at the scoreboard first thing on Friday … it’s going to be 0-0. So that’s it. Nothing else matters.”

The 2016 Wimbledon boys’ champion compiled nearly twice as many winners as Khachanov, 59-31. That total included 17 aces for Shapovalov, which helped lessen the importance of his 10 double-faults.

The last break came at 4-all in the fifth set. Shapovalov converted his fourth break chance in that game when Khachanov sent a forehand long.

On the other side of the draw, Wednesday’s quarterfinals were eight-time champion Roger Federer against No. 14 Hubert Hurkacz of Poland, and No. 7 Matteo Berrettini of Italy against No. 16 Felix Auger-Aliassime of Canada.

Federer and Djokovic have won a combined 13 titles at Wimbledon and made 30 appearances in the quarterfinals.

None of the other six men left in the draw when Wednesday began had ever been to the quarterfinals at the All England Club, equaling a tournament record for the most debuts in the round of eight.

Indeed, only one member of the group previously went as far as the semifinals at any Grand Slam tournament: Berrettini lost at that stage in the 2019 U.S. Open.

The women’s semifinals Thursday will be No. 1 Ash Barty vs. 2018 champion Angelique Kerber, and No. 2 Aryna Sabalenka vs. No. 8 Karolina Pliskova.

It took the top-seeded Djokovic just 18 minutes to collect 20 of the first 27 points and the initial five games against Fucsovics, a 29-year-old from Hungary.

That’s when there was that three-game blip, an odd midmatch lapse, perhaps a result of the swirling breeze that made the tennis balls dance unpredictably in the air.

Soon enough, Djokovic used a five-game run bridging the end of the second set and start of the third to leave no doubt about the outcome.

At 4-all in the second set, Djokovic demonstrated that ability of his to grind it out, to never be deterred, no matter what.

He held a break point there that he failed to convert when he flubbed a forehand to cap a 28-stroke exchange, the longest of the match. Opportunity lost? Sure. Head down? Not a chance. It was, of course, Fucsovics who blinked, putting a forehand into the net, then pushing a backhand long.

The key break, and a 5-4 edge, his, Djokovic skipped in place and glared toward the stands, then jogged to his seat while Fucsovics trudged to his.

Less than an hour remained in the match, and Djokovic never relinquished his grip on it again.