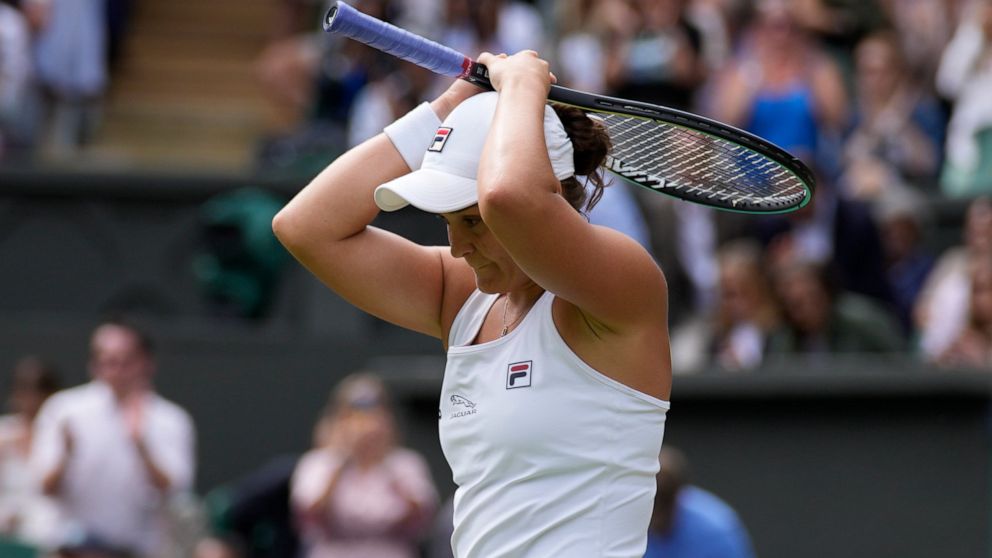 WIMBLEDON, England — It might have been difficult for Ash Barty to imagine that a trip to her first Wimbledon final was just around the corner when she stopped playing at last month’s French Open because of an injured hip.

Or even when she was two points from being pushed to a third set by Angelique Kerber in their semifinal at the All England Club.

Barty does not let obstacles trouble her for too long. She figures out a way. That’s why she’s ranked No. 1 and now stands one win from a second Grand Slam title after beating 2018 champion Kerber 6-3, 7-6 (3) on Thursday.

“I’ve had ups and downs and everything in between and I wouldn’t change one day or one moment or one, kind of, road that we’ve taken in my path and my journey,” said Barty, who was the 2011 junior champion at the All England Club and stepped away from tennis for almost two years starting in 2014 because of burnout.

“It’s been unique. It’s been incredible. It’s been tough. There have been so many things that led to this point,” she told the Centre Court spectators. “Being able to play on the final Saturday here at Wimbledon is going to be just the best experience ever.”

Barty is the first woman from Australia to reach the title match at the grass-court major since Evonne Goolagong in 1980.

The opponent Saturday will be No. 2 seed Aryna Sabalenka or No. 8 Karolina Pliskova. They met in the second semifinal.

The 25-year-old Barty won the 2019 French Open for her first Grand Slam title.

On Thursday, she faced a big test in the second set, which Kerber was two points from owning when Barty served at deuce while trailing 5-2. The full-capacity crowd was backing the comeback effort for the 33-year-old German, too, with shouts of “Come on, Angie!” and “Go on, Kerber!”

But Barty steeled herself to hold there, then broke to get within 5-4 with a cross-court forehand passing winner.

That was part of a 38-16 advantage in total winners for Barty, responsible more than anything else for her triumph. And this was remarkable: She compiled that many point-ending shots while making only 16 unforced errors.

“This is close to as good a tennis match as I’ll ever play,” Barty said. “Angie definitely brought the best out of me today.”

It was a rather entertaining and, from point to point, rather even contest, two talented baseliners willing to try a volley, drop shot or lob when required. They were each other’s equal for long exchanges — in all, 22 points lasted at least nine strokes, with Kerber winning a dozen.

Their approaches are different, though. Kerber is a left-hander who hits flat groundstrokes and is just fine with handling foes’ low shots, often dropping a knee onto the turf to get leverage.

Barty is a righty who relies on heavy topspin for a forehand packed with power, and her slice backhand can produce tricky bounces on the grass.