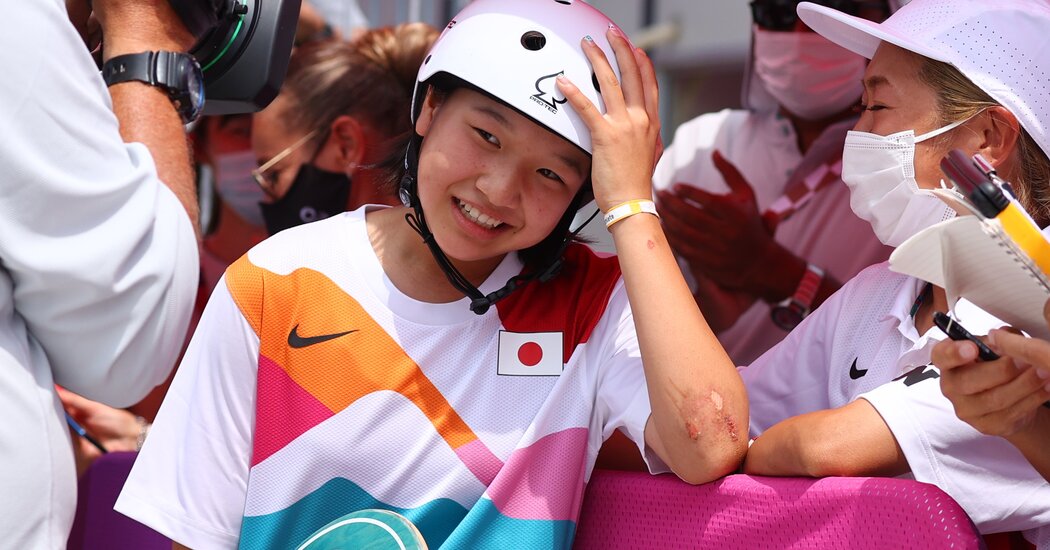 TOKYO — Youth was served to a global audience on Monday when two 13-year-old skateboarders fought to the final trick to determine the winner of the women’s street competition.

Momiji Nishiya of Japan, who is just a few months older than Leal, looked to echo the winning performance of Yuto Horigome in the men’s competition at the same park a day earlier.

Leal went first, needing a big landing to slip past Nishiya. She flew through the air, twisted her board below her, slid down a rail and spilled onto the concrete in disappointment.

Nishiya then clinched the gold in a contest infused with generational cross currents, jolting the Olympics with the kind of youthful spirit that it wanted.

Leal earned the silver medal, and Funa Nakayama of Japan, 16, skated to bronze.

Four of the eight women in the final were 16 or under, and two were 13. They were joined by Alexis Sablone, 34, the veteran from Brooklyn, who was looking to punctuate the late stages of a stellar career with a memorable Olympics, if not a medal.

Sablone stood out because she was 12 years older than the next oldest competitor — and twice the age of some others — but she could not quite stay in contention. Two middling scores on her runs were followed by big numbers on a pair of tricks, but it was not enough to lift her to the podium.

Sablone was in fourth place going to her final trick, but her big finish ended in a spill.

The eight-skater final did not include some of skateboarding’s biggest stars, namely Leticia Bufoni of Brazil, who was ninth in the preliminary heats. Her teammate Pamela Rosa, another gold-medal favorite, finished 10th.

Those unexpected results upended Brazil’s hope of a podium sweep and put the country’s hopes on Leal.

As Brazil’s expectations collapsed, three Japanese skaters, all of them teenagers, breezed into the final: Nishiya, Nakayama and Aori Nishimura, 19.

Skateboarding is making its Olympic debut at these Games, and Monday was the close of the street discipline, which was contested on a playground of stairs, rails and short ramps meant to simulate something like a schoolyard or an office park. Athletes performed two 45-second runs and five single tricks, and each was judged on a 10-point scale. The four best scores were added together.

There may be an even bigger infusion of youth next week, when skateboarding’s park competition is held with athletes skating in a concrete bowl. In the women’s division, the youngest athletes all have reasonable expectations to win medals.

Kokona Hiraki of Japan is 12 (she will turn 13 a few weeks after the Olympics), but two bigger favorites are Sky Brown of Britain, 13, and Misugu Okamoto of Japan, 15.

The generational shifts were already on full display in street, however, as teenage girls elbowed away the skaters they had long looked to for inspiration.

None may be more of a role model than Bufoni, 28, one of the most famous skaters in the world, who won her sixth X Games gold medal this month in California. She needed a big score on the final trick of her preliminary heat. She landed the trick, but the score fell short of what she needed to reach the final.

She was upbeat afterward, showing little of the heartbreak that consumed her friend Nyjah Huston the day before. Unlike Huston, she said, she does not win nearly every contest, so she knows that losing is part of the deal.

Bufoni spent the finals in the grandstand, empty of fans, rooting for Leal. The two spent most of the past few months together, and Bufoni wanted to give her some pre-final advice: Have fun. You are too young to have pressure.

Leal skated with exuberance, punctuating her runs and tricks with big smiles. Her biggest problem was that she was not alone in skateboarding’s rush to youth.

Djokovic heads for Belgrade after deportation from Australia