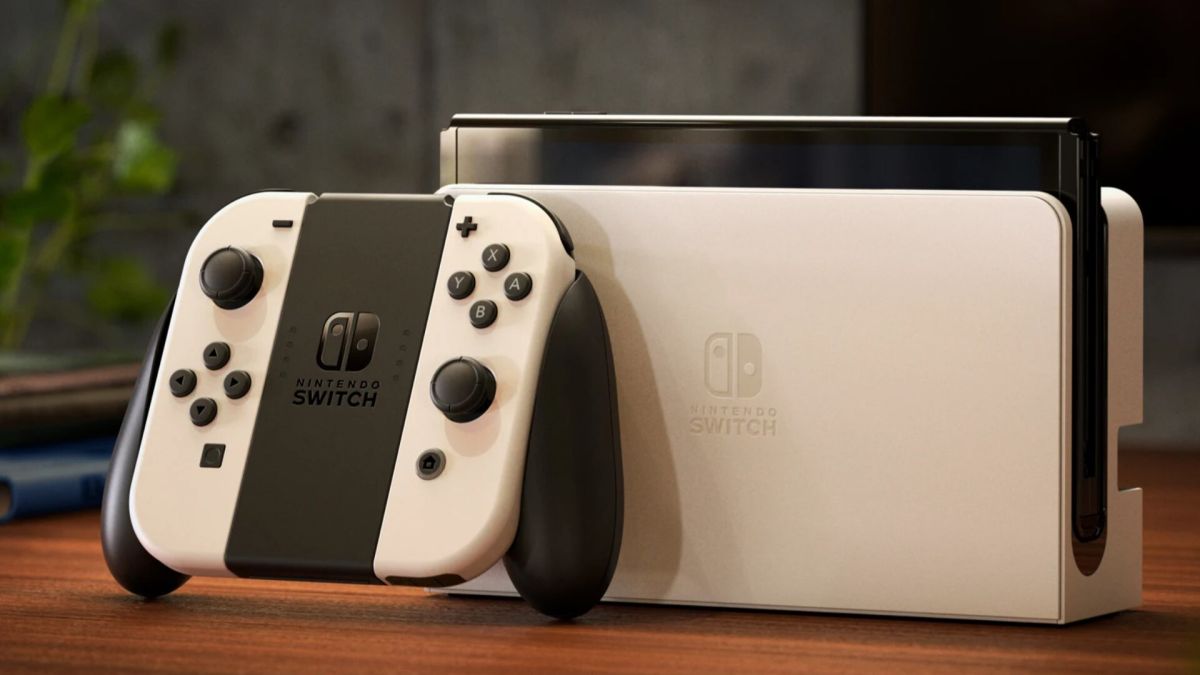 Nintendo made the announcement on July 6 on its official Twitter account, after many had speculated that the new console would be revealed before or during E3 2021 in June.

The specs of the Nintendo Switch OLED align with some of the rumors we’d been hearing about an updated console, and it comes with a 7-inch OLED screen, which is larger than the Switch’s 6.2-inch LCD display. Here’s everything you need to know about Nintendo’s new hybrid console.

It means the Nintendo Switch OLED costs $50 / £30 / AU$90 more than the standard Switch model, which isn’t a massive premium to pay for the new features on offer. It should also return a tidy profit for Nintendo, as Bloomberg reports the new Switch only costs $10 more to manufacture than the original, with the majority of the cost being incurred due to the new screen and extra storage.

However, Nintendo has since denied this is the case on Twitter. The company said: “A news report on July 15, 2021 (JST) claimed that the profit margin of the Nintendo Switch (OLED Model) would increase compared to the Nintendo Switch. To ensure correct understanding among our investors and customers, we want to make clear that the claim is incorrect.”

Nintendo also ruled out the possibility of any new hardware being announced: “We also want to clarify that we just announced that Nintendo Switch(OLED Model) will launch in October, 2021, and have no plans for launching any other model at this time.”

The Nintendo Switch OLED also won’t serve as a replacement for the original Switch model, perhaps surprisingly, and will instead serve as a third choice for consumers at retailer. Nintendo told TechRadar: “We plan to offer all three models and currently have no plans to discontinue any model. It’s about providing choice for the consumer. Each of the three models has distinct features.

We know that the Nintendo Switch OLED’s main appeal is its organic light emitting diode display, or OLED for short. OLED is widely regarded as one of the best display technologies around, as unlike an LCD screen, it doesn’t rely on a backlight to display images. Instead, it displays images using light emitted by each individual pixel, which means you can get perfect inky blacks and higher contrast levels.

The display size of the Nintendo Switch OLED is also larger than the original Switch’s LCD screen. It’s now 7 inches, which should give you a bit more real estate when you’re huddled over playing Mario Kart 8 Deluxe with friends, and provide some added immersion when playing The Legend of Zelda: Breath of the Wild 2 when that game eventually releases sometime in 2022.

Some surprises come in the form of a wider, adjustable stand, and enhanced audio quality; however, it doesn’t look like the Nintendo Switch OLED will support spatial audio tech like Dolby Atmos. Instead, it appears that the speakers on the unit itself have merely been upgraded for a better experience when you’re playing in handheld or tabletop mode.

The wider kick stand is more akin to something we’d find on a Microsoft Surface, and means that, when playing in tabletop mode, it’ll be much easier to find the perfect position to play.

Another new addition is wired LAN support, which will come as a relief to those who feel Nintendo Switch’s online games aren’t the most stable or reliable when played over Wi-Fi. It’ll also benefit titles like Super Smash Bros. Ultimate and Splatoon 3, the latter of which is due to release in 2022.

Nintendo told TechRadar: “The dock’s built-in wired LAN port allows for more stable online play when playing in TV mode, and replaces one of the three previous USB ports. This dock and the previous one are interchangeable, and either will work with Nintendo Switch (OLED model) or the Nintendo Switch console.”

The Nintendo Switch dock has also received a subtle upgrade, as it now sports rounded edges for a more modern-looking design, and comes in an off-white, which matches the new white color scheme of the Nintendo Switch OLED. The console is also available in the classic Neon Blue/Red color combo with a black dock.

Like the previous model, the new Switch dock will be available to purchase separately from the Nintendo online store (it won’t be sold at retail) and will work with the original Switch. The old dock cost $60, so we expect the new dock to be priced similarly.

Want to know about the ins and outs of the new Nintendo Switch OLED? Check out the full breakdown of the console’s technical specifications below:

Is the Nintendo Switch OLED 4K?

Surprisingly, no. One of the biggest features the Nintendo Switch Pro was tipped to have was the option to output at 4K resolution when docked, but the Switch OLED will only output at 1080p, just like the regular Switch. This seems like a big missed opportunity for Nintendo, and might make the upgrade a little harder to justify for some.

It’s likely that the Nintendo Switch OLED display will stick to the 720p output of the original Switch too, as it means existing Switch software won’t have to be upgraded. This means that rumors of Nvidia DLSS support, which using AI upscaling to help games achieve 4K, is off the cards.

Targeting a resolution of 4K resolution could have also led to the console being more expensive, which is why Nintendo may have opted to stick with the original 720p output in handheld mode and 1080p when docked.

Will every Switch game work on the Switch OLED?

Existing Switch accessories will also work with the Nintendo Switch OLED model, according to Nintendo, but naturally things like screen protectors wouldn’t be compatible due to the Switch OLED’s larger screen.

What happened to the Nintendo Switch Pro?

The Nintendo Switch OLED is essentially the Nintendo Switch Pro that has been heavily rumored for quite some time. The technical specifications all line up with what we’ve heard previously, though the biggest outlier is the lack of 4K resolution support when docked.

TechRadar asked Nintendo about the possibility of a future Nintendo Switch Pro announcement and was told: “We never announced a ‘Nintendo Switch Pro’ and we can’t speak to the predictions that others make about our products. We do believe Nintendo Switch (OLED model) enhances the gaming experience and is another option within the Nintendo Switch family of consoles that is already being enjoyed by millions of people worldwide.”

The Switch OLED announcement has been met with disappointment by some who were hoping Nintendo would follow a similar strategy to Microsoft and Sony, who both released more powerful consoles in the form of the Xbox One X and PS4 Pro during the last generation. This allowed existing games to receive resolution bumps and better performance, which would admittedly be welcome for some Switch titles.

It’s unlikely, then, that Nintendo will announce another Switch model anytime soon, but an analyst believes that Switch Pro might still be in the works. We’d advise tempering your expectations, though, as a more powerful Nintendo Switch model suddenly seems a long way off.

Will OLED burn-in be a cause for concern?

One of the most common concerns regarding OLED displays is that they can be susceptible to burn-in. Burn-in is a term used to describe permanent image retention on OLED displays that can occur from looping logos or static HUDs. When elements such as these are displayed for hours at a time, it can permanently scar the panel’s pixels, leaving residual ‘ghost’ patterns that can’t be turned off.

But could the Nintendo Switch OLED be susceptible to burn-in? Nintendo told TechRadar: “We’ve designed the OLED screen to aim for longevity as much as possible, but OLED displays can experience image retention if subjected to static visuals over a long period of time.

“However, users can take preventative measures to preserve the screen by utilizing some of the Nintendo Switch console’s included features, such as using auto-brightness to prevent the screen from getting too bright, and enabling the auto-sleep function to put the console into “auto sleep” and turn off the screen after short periods of time.”

TecchRadar also spoke to OTI Lumionics CEO Michael Helander, an expert in the field of OLEDs, who told us that “Modern OLED display panels have active compensation that will prevent the effect of burn-in. This records how much time each pixel has been turned on individually and will then in the back-end hardware adjust the output signal […] to ensure that screen output remains uniform and effect of burn-in is eliminated.”

Helander cites Nintendo’s ability to control “the UI of games launched on their platform”, allowing it to “shift UI boxes slightly during gameplay session to eliminate the issue of individual pixel burn-in”, and added that “there were not a lot of complaints in the PS Vita regarding burn-in from OLED devices 8-10 years ago […] The lifetime of OLED devices has improved at least 10x over the last 8 to 10 years, thus I don’t expect burn-in to become an issue for the Switch OLED.”

Fingers crossed, then, that burn-in doesn’t occur on the Switch OLED model.

Will Joy-Con drift be fixed on the Switch OLED?

Nintendo has confirmed that the Joy-Con controllers that ship with the Nintendo Switch OLED haven’t been updated or changed in any way. This means that the dreaded issue of Joy-Con drift could still occur, which is disappointing.

“At Nintendo, we take great pride in creating quality products and we are continuously making improvements to them. We are aware of reports that some Joy-Con controllers have not responded correctly. We want our consumers to have fun with Nintendo Switch, and if anything falls short of this goal we always encourage them to visit http://support.nintendo.com so we can help.”

Joy-Con drift occurs when the analog stick of either Joy-Con inputs signals even when in the neutral position. This can lead to your onscreen crosshair or character moving without any input from the user. Nintendo has faced multiple lawsuits regarding the problem, and even publicly apologized for Joy-Con drift in 2020.

It’s a shame that the Switch OLED Joy-Con controllers could exhibit the same drifting problem, especially as it’s been an ongoing concern since 2017.

A number of outlets have gone hands-on with Nintendo’s new Switch OLED, and the general consensus appears to be that while the OLED display is certainly a welcome upgrade over the LCD panel, it isn’t an essential purchase for existing owners.

IGN’s deputy reviews editor Tom Marks said the Switch OLED’s display was “immediately shining bright and clear from pretty much any viewing angle I tried” and likened the upgrade to the Game Boy Advance SP. Marks was also a fan of the new kickstand, and said that “its hinges offer a satisfying amount of resistance so that you can easily lean it at nearly any angle and be confident it will stay that way.”

GameSpot’s editor and producer Alessandro Fillari said that “while people who play in docked modes with solid TV sets aren’t going to be blown away by the OLED model’s visuals, this still makes handheld mode look better than it ever has. It honestly made me interested in seeing how my other favorite games, like Super Smash Bros. Ultimate, would look on the new display.”

The Verge’s executive editor Dieter Bohn believes that while the Switch OLED model justifies its existence, it doesn’t justify an upgrade for most people. “The improvements here are not going to unlock new game experiences or capabilities, they just make the current experiences a little nicer.”