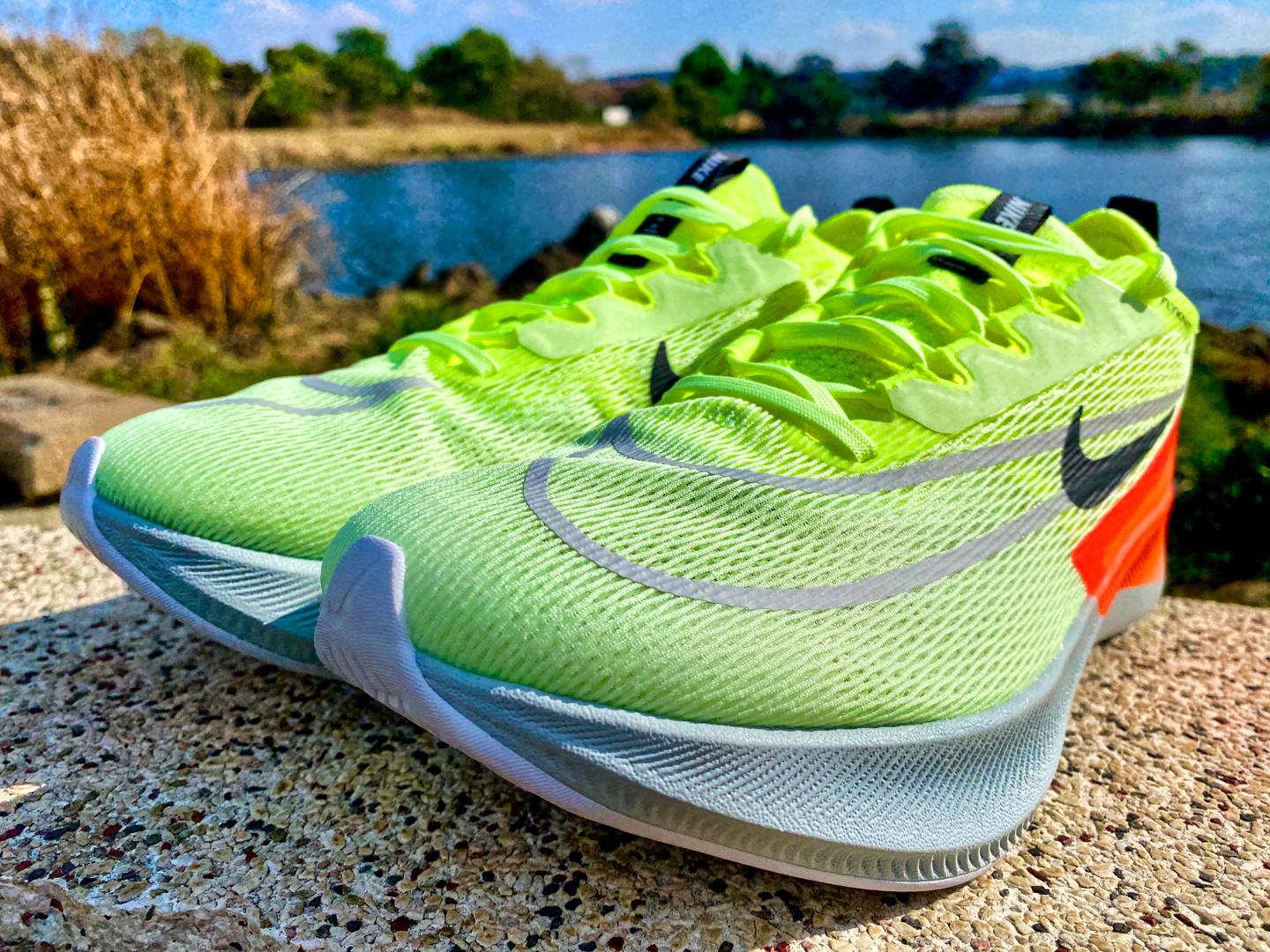 Back in 2017, when the original Zoom Fly was launched, it was the very first training companion and it was designed to be a more durable, cheaper version of the revolutionary Vaporfly 4% racer.

Since then, other training companions like the Endorphin Speed, FuelCell TC, Tempo Next%, Deviate Nitro and the Boston 10 have also joined this relatively new category. The original Zoom Fly was way ahead of its time and was a trendsetter.

Up to now, I’ve never been a big fan of the Zoom Fly series. I’ve found the Zoom Fly midsoles to feel underwhelming underfoot and their uppers uncomfortable. To me, all the previous versions of the Zoom Fly have been poor training counterparts to the Vaporflys.

The name “Zoom Fly” also isn’t a great name for it and it’s misleading because it has neither Zoom Air nor ZoomX in its midsole. A more fitting name for it would have been the “React Fly” or the “React Vaporfly”.

The Zoom Fly 4 has been 2 years in the making and surprisingly, it maintains the same midsole-outsole as the Zoom Fly 3 and it only receives a new upper.

2021 really is the year of the upper for Nike with the Pegasus, Vomero, Structure, Miler, Vaporfly Next% and Infinity Run also only receiving just an upper change. Nike should plan the launches of their popular shoes’ major and minor releases more carefully because 2021 feels like a year in which Nike isn’t even trying to excite us. 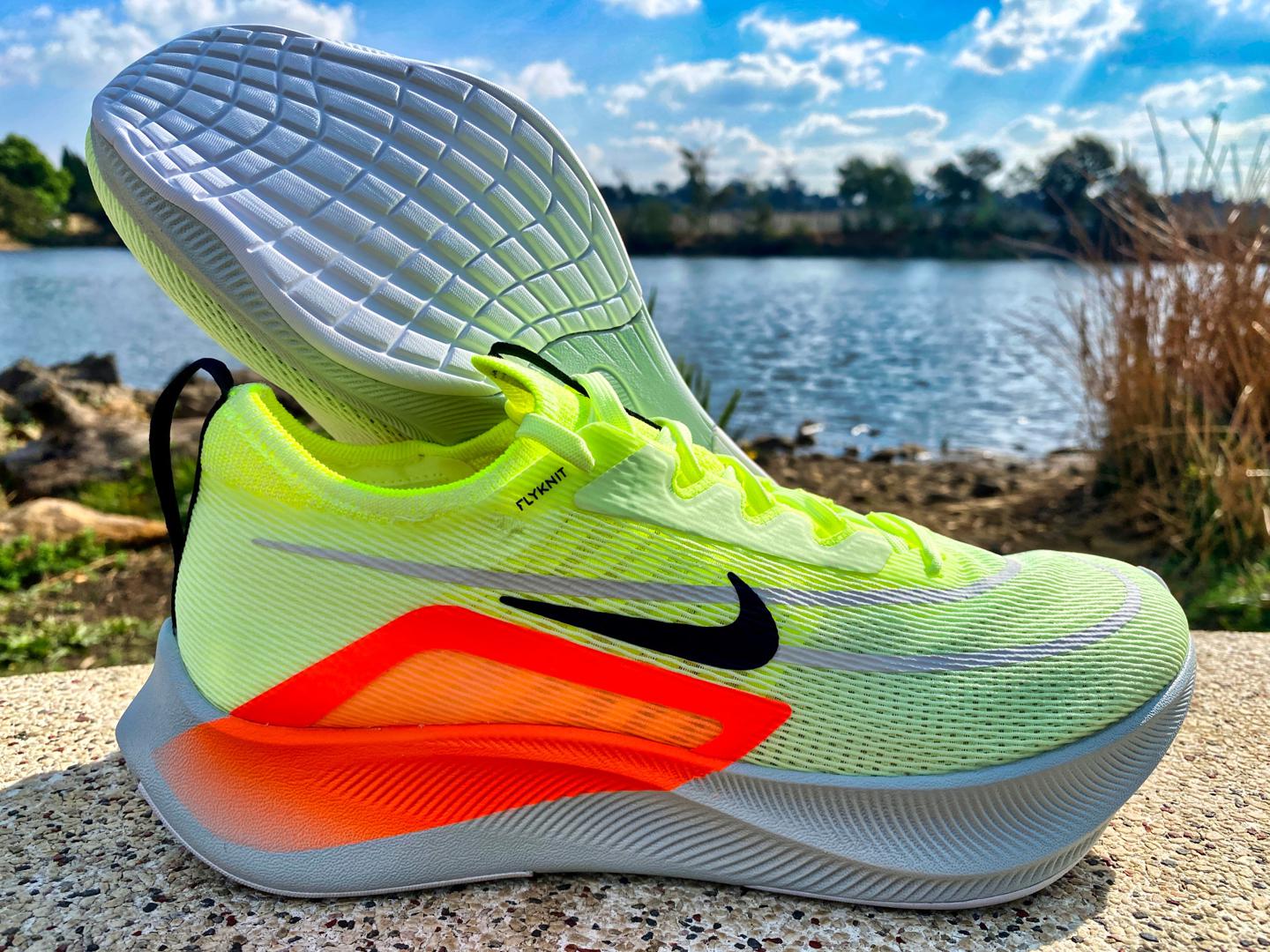 When I put the Zoom Fly 4 on for the first time, the new Flyknit upper conformed to my feet. The sole felt slightly softer and more forgiving underfoot than the last version which is odd because it’s the exact same midsole and outsole as the Zoom Fly 3.

It must have been the new, softer upper that gave me the perception that the Zoom Fly 4 felt softer underfoot.

My first run was 10 km at a 5 minute per km steady pace. I was really taken back at how much more comfortable and engaging the ride was compared to the Zoom Fly 3. 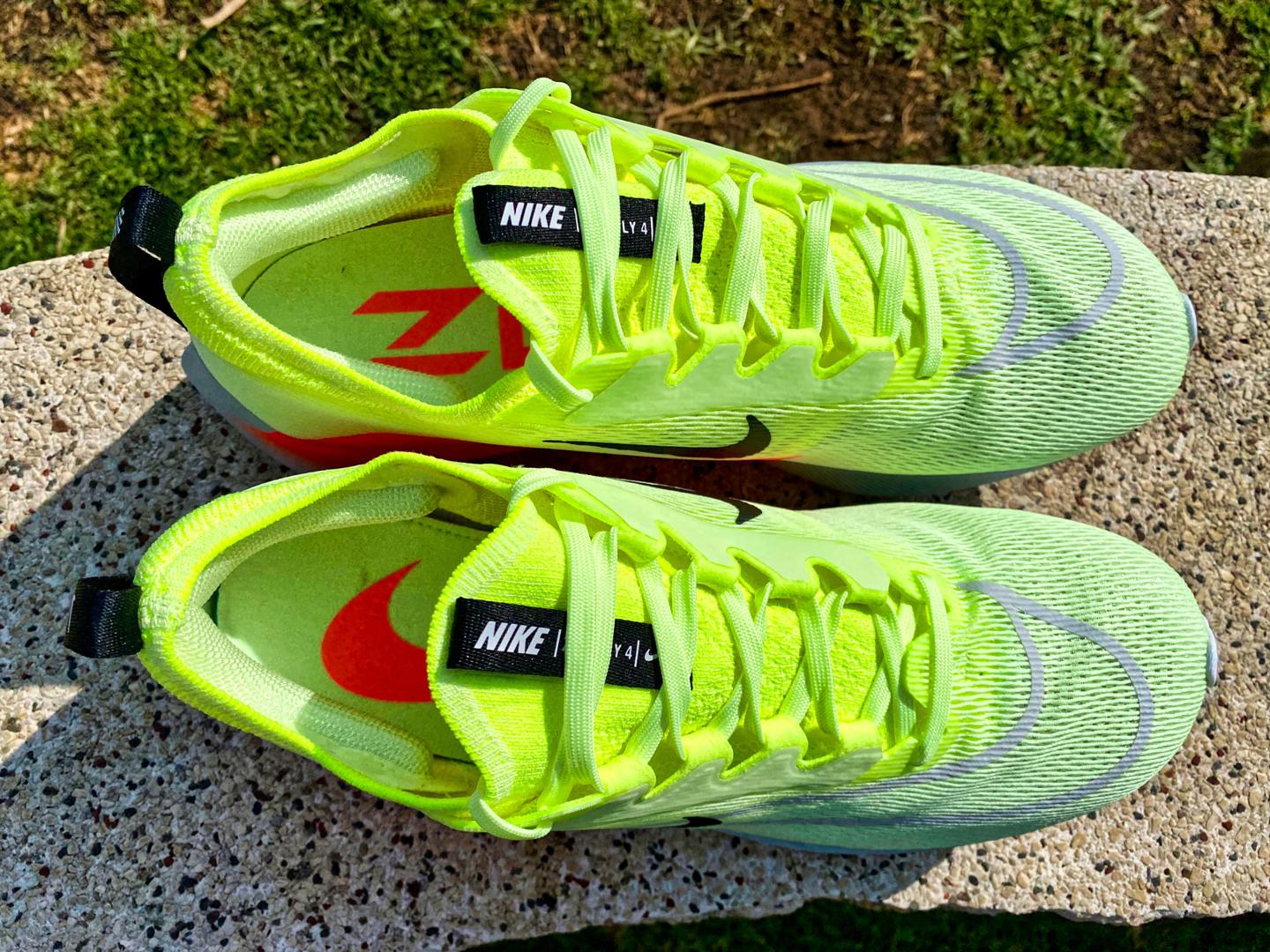 It felt really snappy and easy to pick up the pace because of how rigid the carbon plate was and I felt like I wasn’t expending a lot of energy to reach the speeds that my watch was indicating.

This was confusing for me because the Zoom Fly 4 has the same sole as the Zoom Fly 3 so it should have the same ride yet I liked version 4’s ride much more than version 3’s.

I’ve been doing a lot of workouts in the Vaporfly over the past 2 months and the ride of the Zoom Fly 4 was the most similar feeling to it. It was however much more stable because of its firmer midsole and not as bouncy.

During the first run, the Fly 4 finally felt like a proper training companion to the Vaporfly Next% 2. 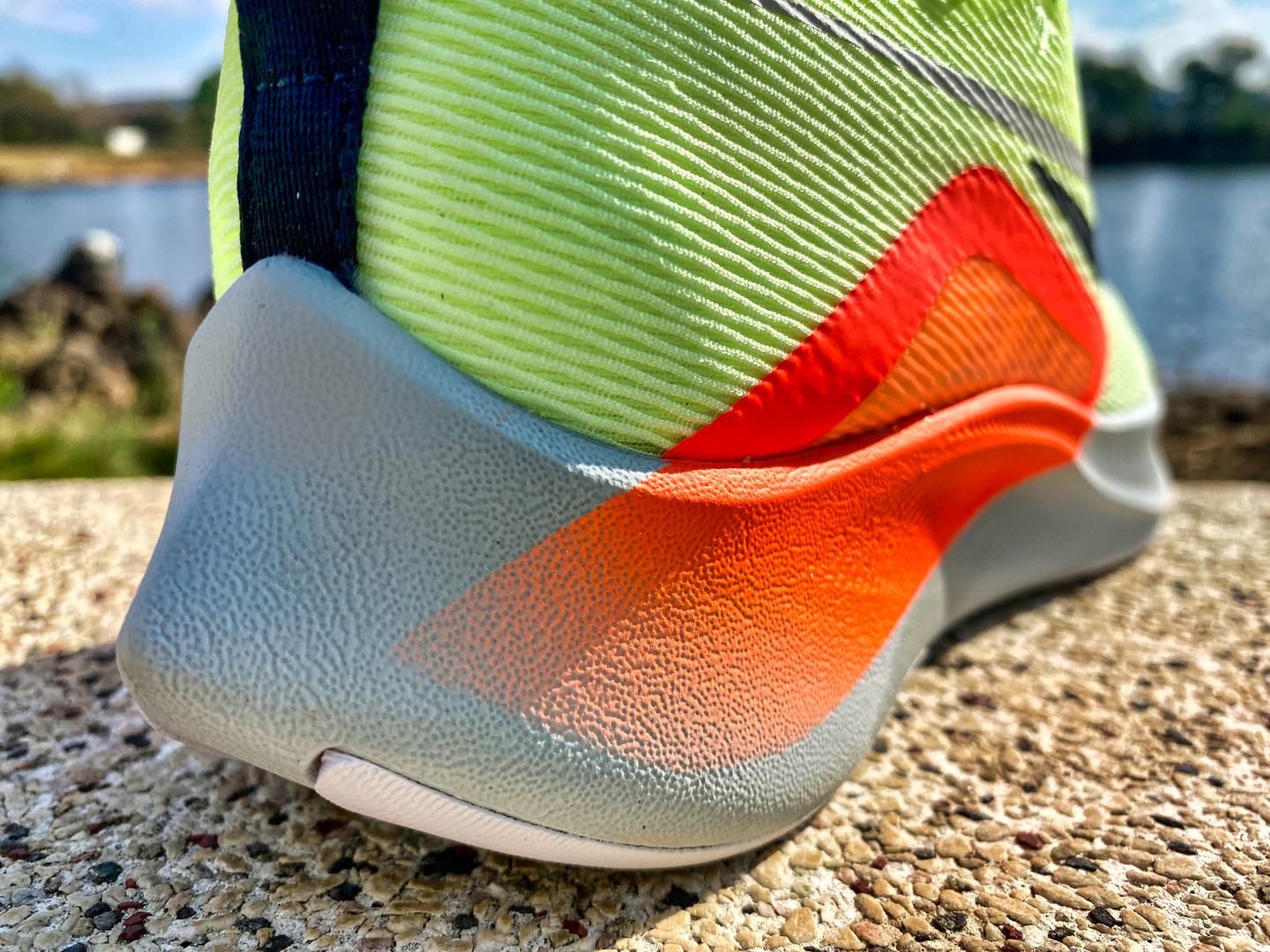 The Zoom Fly 4 is a good training companion to the Vaporfly Next% 2 because they both have the signature forward-tipping sensation when running in them.

While other carbon-plated shoes utilise a rocker to propel you forward, the Vaporfly Next% 2 and the Zoom Fly 4 have a unique forefoot which is angled upwards and not rounded.

When you transition from the midfoot to the forefoot, it feels as if you’re stepping off the edge of a ledge. That’s what makes them feel so fast, however the tipping sensation in the Zoom Fly 4 is muted compared to the Vaporfly Next% 2 because of the different midsole foams used.

The React foam that the Zoom Fly 4’s midsole is made of is firmer and denser than the super soft, super bouncy midsole of the Vaporfly Next% 2 which is ZoomX foam. This makes the ride feel less lively in the Zoom Fly and also makes it not as comfortable for long distance runs.

The Zoom Fly 4 is a maximalist trainer and is almost at the 40 mm stack height limit for World Athletics races so although the shoe rides firm, it’s still very well cushioned and can easily handle full marathon distances.

Versatile the Zoom Fly 4 is not because it doesn’t handle slow paces well. During easy runs, I Iand further back on my feet and the shoe feels slightly unstable due to its narrow midfoot and rearfoot. At paces above 5.30 per kilometre, it also feels like my feet are trying to bend the carbon plate instead of rolling over it which makes the ride feel awkward.

It shines when you’re doing steady or tempo paces because its firm midsole makes it easy to tap into its speed and when going fast, you can lean forward and load the forefoot. This propels you forward like a spring-board. 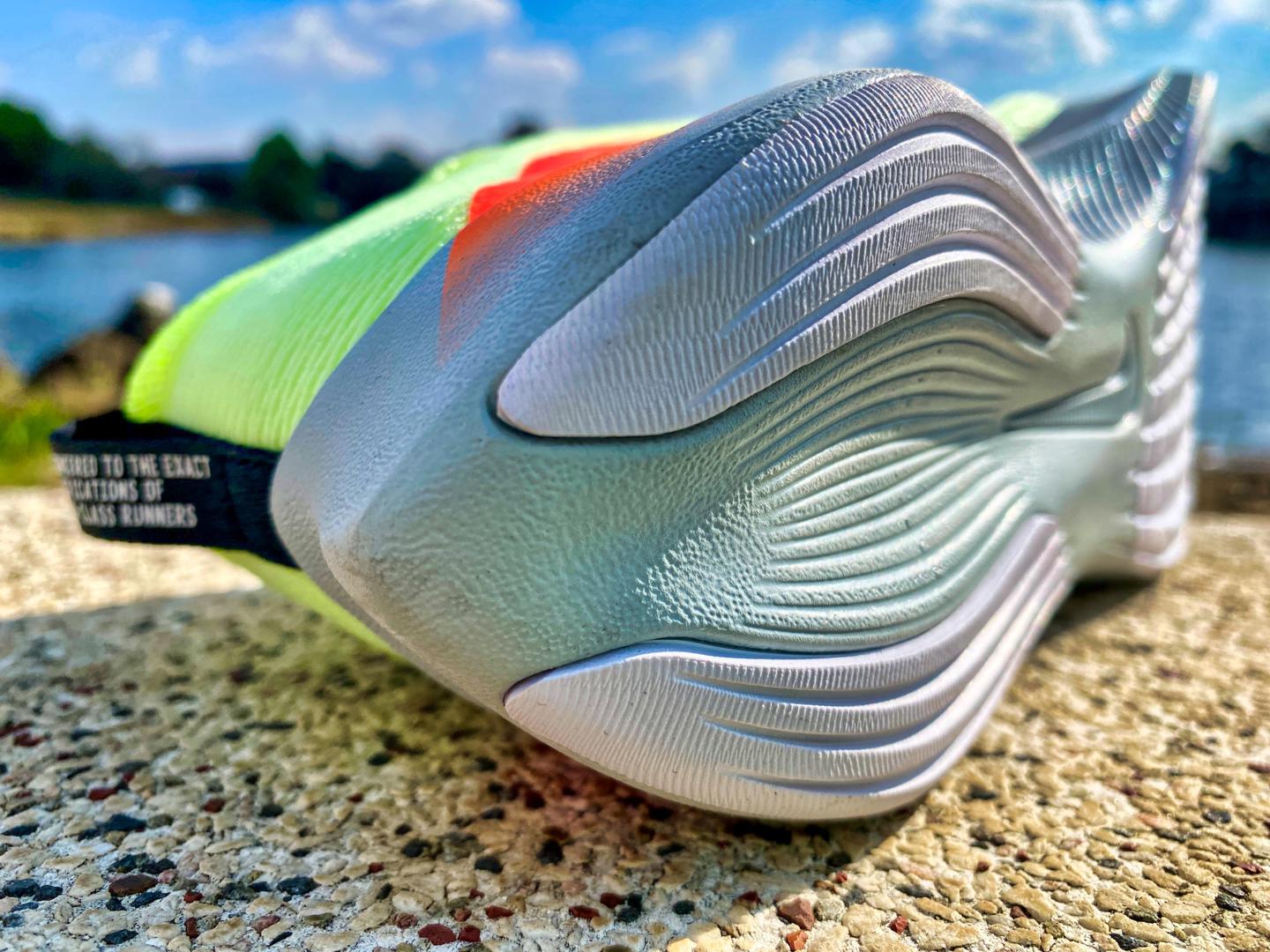 The carbon plate in the Zoom Fly 4 is about the same stiffness as the plate in the Vaporfly Next% which gives it an unnatural ride because of how rigid it is so I prefer to use the Zoom Fly 4 for faster efforts only, rather than as a daily trainer for the bulk of my mileage.

For me, the Zoom Fly 4’s outsole has the perfect placement of outsole rubber but the rubber is not thick enough. The outsole design is the same as the Vaporfly Next% with the entire forefoot covered and the sides of the rearfoot also covered by longitudinal rubber strips.

The dense React midsole foam which forms part of the outsole is exposed and is more abrasion resistant than the average midsole foam so you don’t have to worry about foam chips and scuffs like with the Vaporfly Next% 2.

The outsole rubber is also hard but not as durable as the rubber used on the Vomero and Pegasus. The rubber is recessed into the midsole foam so it’s not as thick as the Pegasus/Vomero’s rubber and it doesn’t stick out of the midsole.

I’ve put 93 kilometres on my pair and the outer heel area rubber has smoothed and almost worn down to the midsole foam already which is a bit disappointing.

Traction is not very good on wet surfaces because of how flat the outsole is and its lack of aggressive protruding lugs. Grip is fine on dry surfaces but you’ll want to keep the Zoom Fly 4 away from trails. 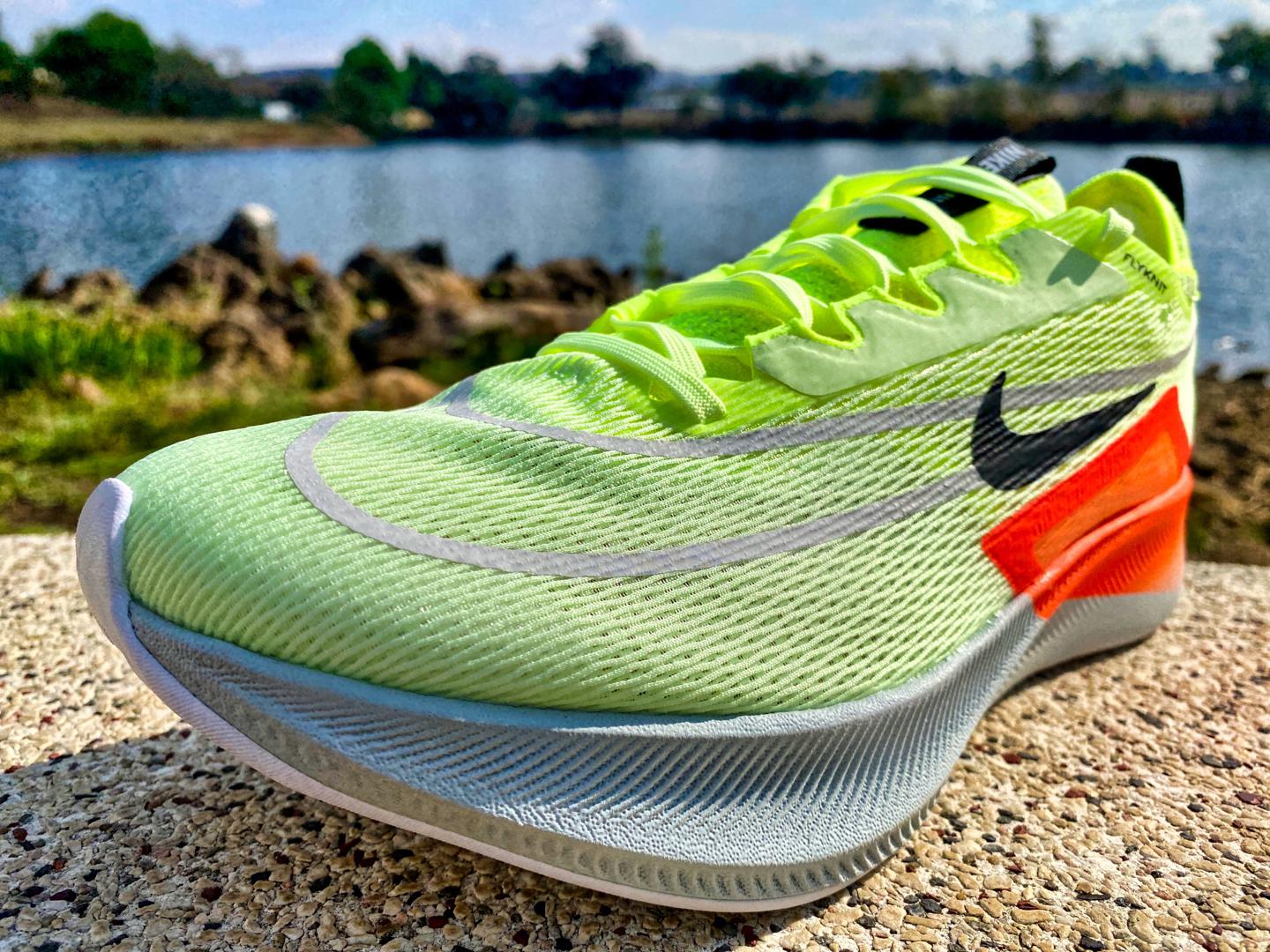 The updated lightweight mesh is a lot softer and more comfortable than the Zoom Fly 3’s Vaporweave upper and it consists of 2 layers. It’s also more porous so it breathes much better. I could often feel the crisp, Johannesburg early-morning spring breeze on my feet, through the mesh.

“Flyknit” is printed on the side of the upper but only a very small portion is actually Flyknit. The tongue and the collar are made of this stretchy, knitted Flyknit which is denser and less breathable than the mesh. 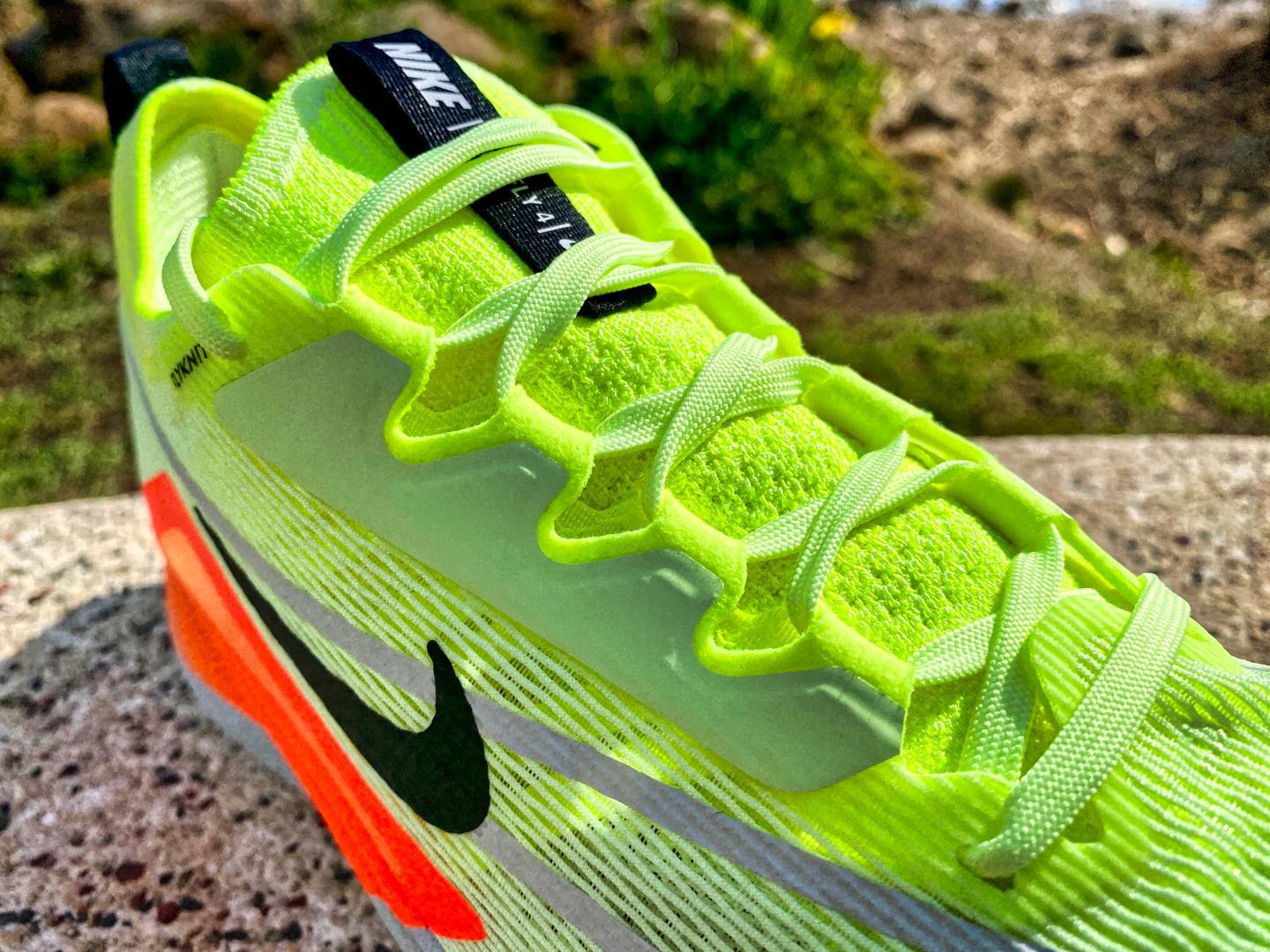 There are now midfoot Flywire cables that provide more support. These cables are stretchy and soft so they don’t dig into your foot like in previous Pegasus iterations. I wish Nike would use this setup on all of their shoes.

A soft foam pod on the inside of the heel keeps your Achilles locked in place. There aren’t any double last row eyelets for a runner’s knot but there isn’t any heel slippage.

The Zoom Fly 4 fits true to size and the new upper is more accommodating than previous Zoom Fly versions but it’s still on the narrow side so it’s not suitable for wide feel.

This is one of the best Nike uppers I’ve worn: comfortable, secure and highly breathable. 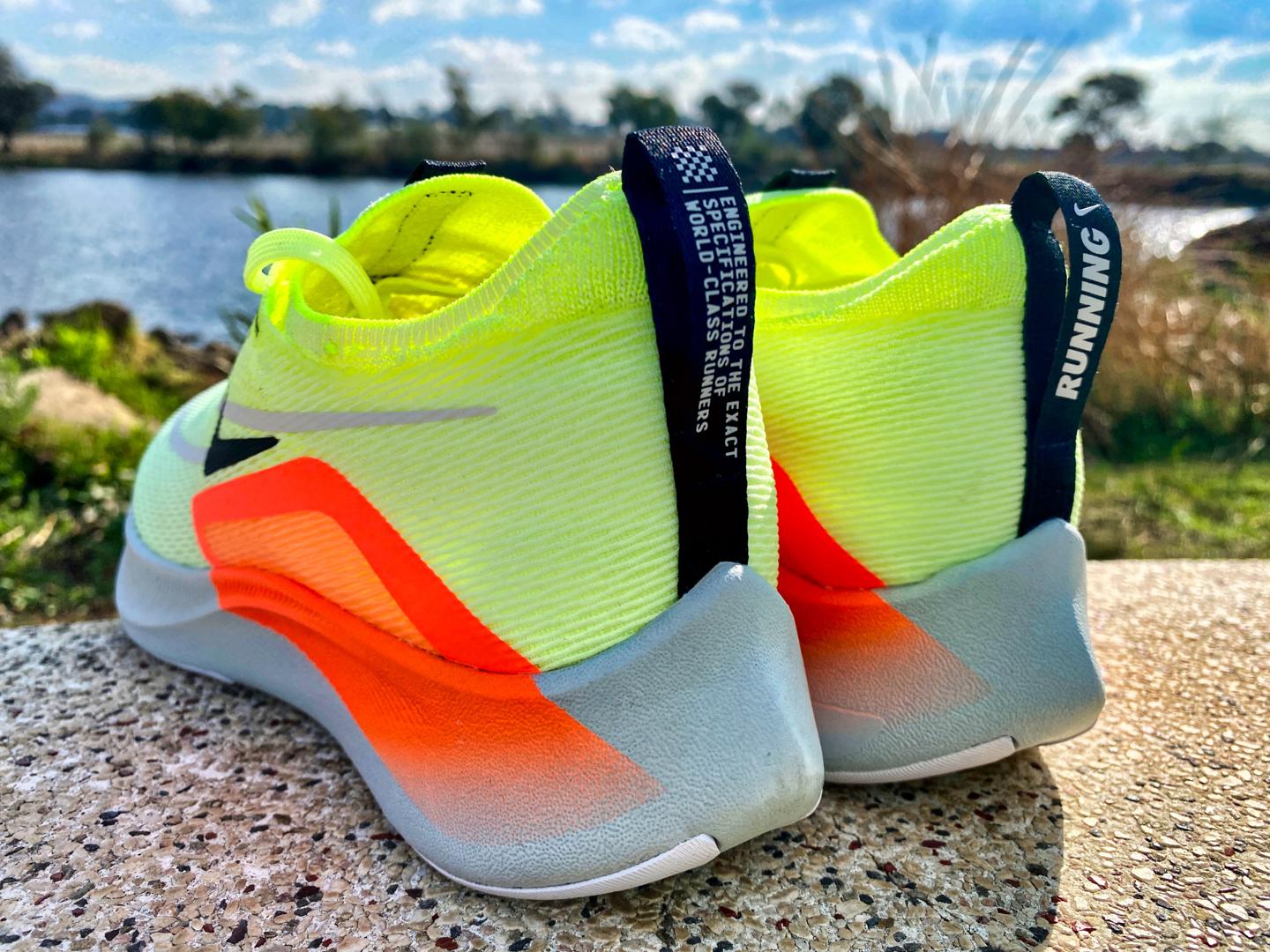 The Zoom Fly 4 is only an upper update but it feels like a completely different shoe to the Zoom Fly 3. I wasn’t expecting such a big improvement but the superb upper has transformed the Zoom Fly into a trainer that I look forward to wearing.

The new, breathable upper provides excellent foot lockdown and is a lot more comfortable than the stiff, plastic-feeling, loose upper of the past. The upper and the sole of the Zoom Fly 4 now work together and the shoe feels much more cohesive.

Not only is it a great training companion to the Vaporfly Next% 2 but it’s also one of my favourites of all the training companions because of how stiff its carbon plate is- it gives you a similar feel to a racer.

It feels faster and snappier than the Endorphin Speed 2, smoother and less complicated than the Tempo Next% and a lot more stable than the FuelCell TC. It also has much better foot lockdown than the Deviate Nitro and the Boston 10.

Yes, it’s on the heavy side and the React foam of the Zoom Fly 4 also feels outdated because it doesn’t return a lot of energy but it’s an extremely durable foam that forms the midsole.

The problem is that ZoomX can’t be used in the Zoom Fly 4 because it’s just not durable enough for training. Nike needs to invent a durable foam that is more energetic and lighter than React for the Zoom Fly 4.

I’m definitely keeping the Zoom Fly 4 in my shoe rotation. I’ll use it for tempo, threshold and interval workouts because it’s a lot tougher than the average super shoe and it still manages to feel fast.

As editorial policy, we do not accept free samples from companies. We purchased this pair of Nike Zoom Fly 4 at Running Warehouse with our own money.