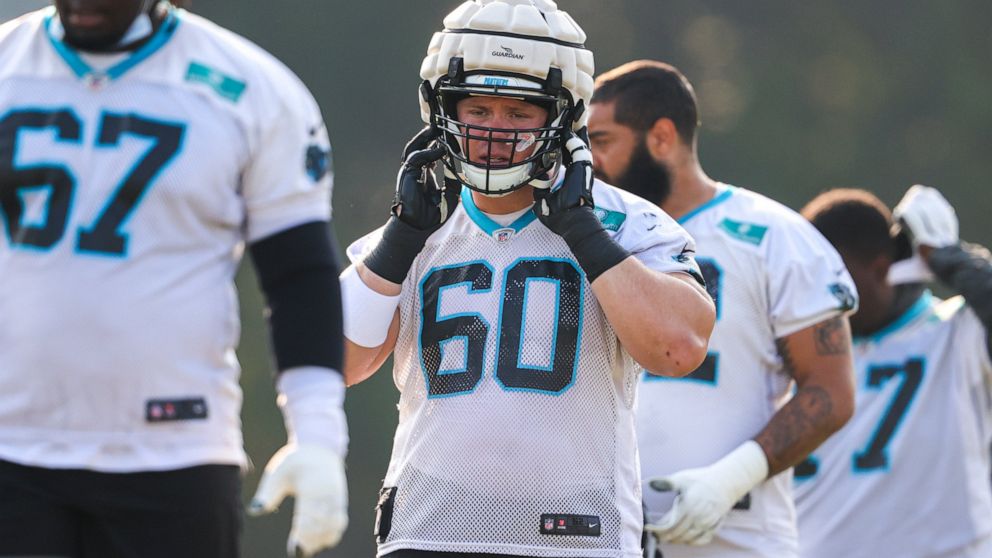 CHARLOTTE, N.C. — For Carolina Panthers rookie offensive lineman Brady Christensen any chance to protect his brain is a no-brainer — even if he thinks he may look a little goofy doing so.

That’s why Christensen is among a growing number of NFL players taking advantage of the new “Guardian Caps,” a soft-shell cover that retrofits to the top of the helmet to reduce impact and limit head injuries.

Sure, it’s a little strange at first, like wearing a small pillow on top of your head.

But NFL players seem to be taking to it at practice.

“Anything to protect my brain a little bit more, I’m all in,” Christensen said. “I want to remember my kids’ names when I’m 50.”

The Jacksonville Jaguars first experimented with the Guardian Caps in practice last year after the product received temporary approval from the NFL and the NFL Players Association. This year, 23 teams purchased the caps before the season for players to try out and five are actively using them: the Panthers, Bills, Dolphins, Bears and Rams. More than 100 players, mostly linemen, are using the caps, according to Jeff Miller, the NFL’s executive vice president of communications for public affairs and policy.

“We are always on the lookout for ways to make the game safer for our players,” Miller said. “And will explore anything that will improve the health and safety of our athletes. … This will dampen the force of some of those hits that they take to the helmet.”

It’s not hard to notice them.

Buffalo Bills center Mitch Morse joked that when he first tried on the cap he felt like a character in a Halo video game.

“You got people giving you hell, your family being like ‘what the hell is this?’” Morse said with a laugh.

Morse said at first his neck was a little sore from wearing the caps, but he’s grown to like the added protection.

“It’s something that I’m very comfortable with and then we tried it on and, of course, we gave each other hell for how it looks,” Morse said. “But then after one practice, I looked at (Bills defensive lineman) Justin Zimmer, I’m like ‘man, I know we were getting after it, and I didn’t feel anything.'”

Through extensive testing at the Biocore laboratories of Charlottesville, Virginia, the NFL believes the caps reduce the severity of impact blows to the head by about 10%.

Currently, more than 200 colleges are using them, including all top five ranked teams in the country. More than 1,500 high schools and 500 youth programs also use the caps to protect their players and there are currently more than 100,000 Guardian Caps in the market today.

The caps used by NFL players weigh about 11 ounces, about 4 ounces heavier than those used by college and high school players simply because professional athletes are generally bigger. Bills defensive tackle Ed Oliver said he tried out the caps at the University of Houston, and jumped at the chance to wear the device again at the NFL level.

“You really don’t feel it,” Oliver said. “The only thing that’s weird is when you watch film they tend to slide up and it looks crazy on film. Other than that they aren’t bad.”

Guardian Innovations, the makers of the caps, won the inaugural NFL HeadHealthTECH Challenge in 2017, a competition funded by the NFL to encourage innovations in equipment. This led to continued discussions and testing with NFL and NFL Players Association engineering consultants. The results of the product were reviewed by NFL chief medical officer Dr. Allen Sills and by the NFLPA’s medical director Dr. Thom Mayer and found to be beneficial in the protection of impact to the head.

Erin Hanson, the owner and founder of Guardian Innovations, said she and husband Lee started the company because they knew they had a solution that could better protect players and felt an obligation and responsibility to help.

“The mission of our company is to innovate equipment to better serve athletes,” Hanson said.

Miller said the NFL is still in “information collection mode,” talking to players and learning from them about what they like and dislike about the product.

The caps are only allowed in practice and cannot be worn in games. But Miller wouldn’t rule out players wearing them on game day in the future.

“We will go back after this preseason, put our heads together on the user feedback and think through whether we would want to take another step in terms of permitting it on the field during games,” Miller said. “We haven’t made that decision, and we won’t make it for this year. But it’s another data point that will we talk through. Look, there is no product device data point that improves health and safety for the players that we would dismiss.”

For now, the hope of those at Guardian Innovations is that more NFL players will take advantage of the product and try it out.

“Anytime you are doing something different it just takes some time to get more traction,” said Tony Plagman, a national sales manager for Guardian Innovations. “But we are seeing some feedback where guys are saying, ‘I like it. I think it’s helping.’ So hopefully word will spread between players that it doesn’t really matter what you look like if it’s something that can help you throughout the course of your career.”