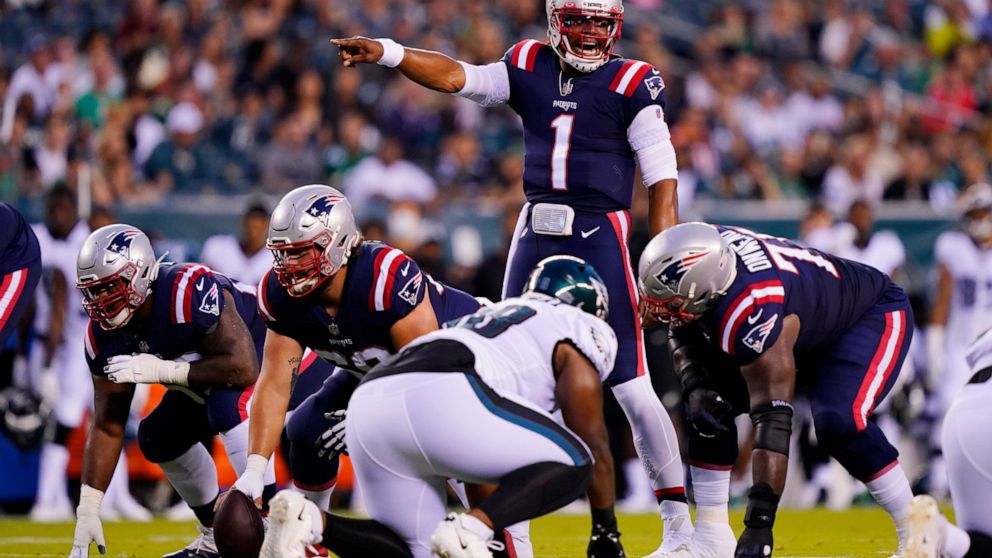 FOXBOROUGH, Mass. — Patriots quarterback Cam Newton will miss at least three days of practice this week after traveling to a team-approved, out of town medical appointment over the weekend, possibly opening the door for rookie Mac Jones to gain ground in their competition to be the Week 1 starter.

The team said in a statement Monday that Newton went to the appointment Saturday and tested negative each day for COVID-19.

But due to a “misunderstanding about tests conducted away from NFL facilities” that is required by NFL and NFLPA protocols, he has been subjected to a five-day, re-entry cadence before he can return to the Patriots’ team facilities. The earliest he is eligible to return is Thursday.

The statement said Newton will continue participating in team activities virtually while he is being held out of practices. How it will affect his availability for the Patriots’ exhibition finale against the Giants on Sunday will be determined. The Giants will be in Foxborough for joint practices Wednesday and Thursday before hosting New England for the game.

Asked earlier this month whether he has been vaccinated for COVID-19, Newton declined to answer.

“I think it’s too personal for each and every person to kind of discuss it, and I’ll just keep it at that,” he said.

Monday marked the first practice absence this preseason for Newton, who is in his second season in New England after being signed prior to last season following Tom Brady’s departure to Tampa Bay.

Newton struggled in limited action in the Patriots’ first preseason game, but shined in their second exhibition matchup at Philadelphia last week, passing for 103 yards and a touchdown in a 35-0 win. He is trying to keep his starting job this season after New England used its first-round pick on Jones.

In Newton’s absence, Jones received all the practice snaps with the projected first-team offense on Monday.

Patriots veteran safety Devin McCourty has been an advocate for vaccination and along with teammate Matt Slater participated in a video promoting COVID-19 vaccine importance back in April.

But McCourty, who has acknowledged his own initial vaccine hesitancy, has also repeatedly said and reiterated Monday that the decision of whether to get vaccinated should be a personal one.

He said any effect those decisions have on the overall team must be taken in stride.

“At the end of the day, it is what it is. You have to abide by whatever it is that we’re being asked to do, or however you want to see the rules, or whatever. We just go from there,” McCourty said.

“And I think that’s what each guy is going to do in the locker room. Take care of what they can control and however it kind of turns out for us will be what it is.”

Coach Bill Belichick said cornerback Stephon Gilmore remains day to day as he works his way back from a quadriceps injury that has kept him on the active/physically unable to perform list throughout training camp.

“I know that Steph’s been working extremely hard. See him in here all the time, and he’s doing other things while we’re practicing, so we don’t really see him on the practice field, but you know, he’s been doing everything he can do,” Belichick said.

The regular-season status of the 2019 NFL Defensive Player of the Year remains uncertain as he looks to get additional compensation entering the final season of the five-year, $65 million deal he signed in 2017. He is scheduled to make a base salary of $7 million this season.

Despite not being able to practice, cornerbacks coach Mike Pellegrino said Gilmore has remained engaged with his teammates.

“It’s very easy for guys when they’re injured to kind of be quiet and take a backseat. He hasn’t done that,” Pellegrino said. “Been great. I love having Steph in the room. So he’s been top notch all the way through this.”

Tight end Jonnu Smith returned to practice Monday after sitting out the exhibition matchup with the Eagles.

Also returning to practice was long snapper Joe Cardona, who had been sidelined with an unspecified injury since Aug. 9, along with defensive tackle Lawrence Guy, defensive back Jonathan Jones and kicker Nick Folk.