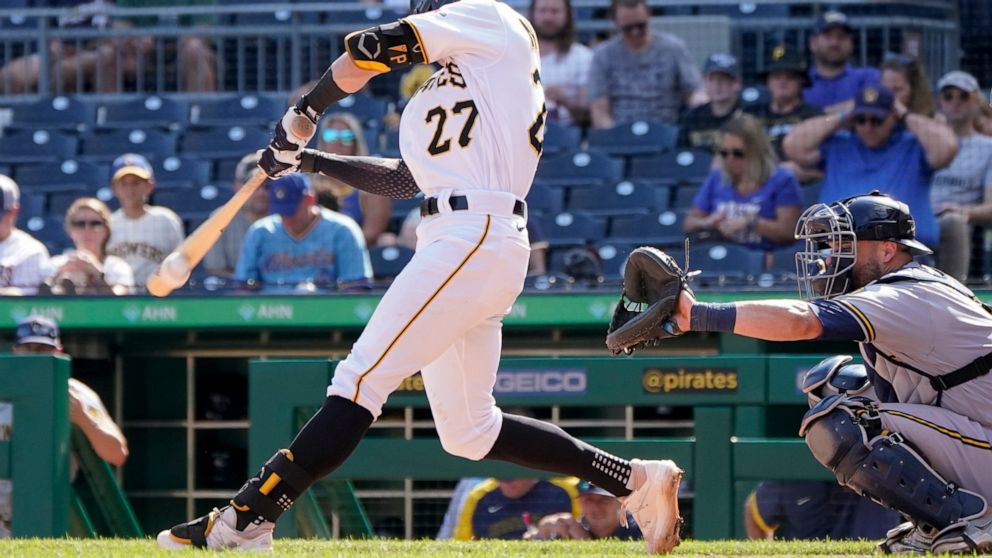 PITTSBURGH — Kevin Newman tied a major league record with four doubles — in successive innings, no less — and the Pittsburgh Pirates rolled over the Milwaukee Brewers 14-4 Saturday to snap their eight-game losing streak in the first game of a doubleheader.

Newman doubled in each inning from the third through the sixth in the seven-inning game. He also scored four times.

The only Pirates to previously hit four doubles in a game were Hall of Famer Paul Waner in 1932 and Adam Frazier in 2019.

Chasen Shreve (1-0) struck out the side in the fifth.

Brett Anderson (4-6) was tagged for six runs and eight hits in 3 1/3 innings. He lost for just the second time to the Pirates in eight career decisions.

Pirates starter Bryse Wilson remained winless in three starts since being acquired from Atlanta in a trade July 30. He was charged with four runs in four innings while giving up seven hits.

The Brewers’ Tyrone Taylor had two hits, including a solo home run in the fourth that tied it at 4. Manny Pina also had two hits for NL Central-leading Milwaukee, which ended a four-game winning streak along with a 10-game road winning streak inside the division.

The Pirates answered Taylor’s blast with two runs in the bottom of the fourth to move in front 6-4. Pinch-hitter John Nogowski and Hayes hit RBI single.

A four-run third inning helped the Pirates wipe out a 3-0 deficit. Stallings’ two-run infield single capped the inning that included Hoy’s RBI single and a run-producing groundout by Colin Moran.

Kolten Wong led off a game with a home run for the sixth time in his career and the Brewers extended their advantage to 3-0 in the third when they scored on a wild pitch by Wilson and a single by Pina.

The game was a makeup of Friday night’s rainout.