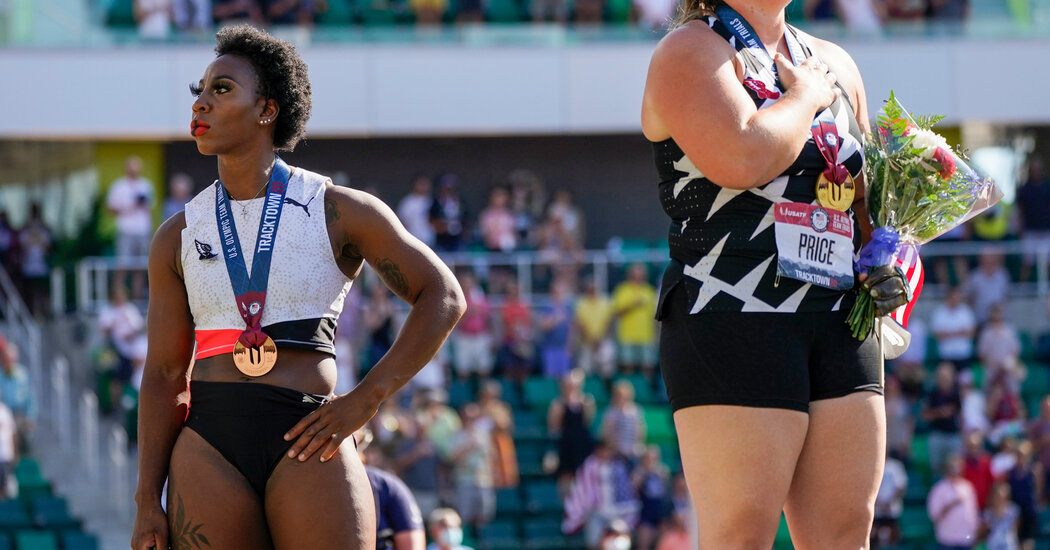 The American hammer throw athlete Gwen Berry, a contender for a medal at the Summer Olympics, has already raised her fist on a medal podium at a competition, and at the selection meet for the U.S. Olympic track team she turned away as the national anthem was played, drawing worldwide attention and debate.

U.S. Olympic officials, bowing to a surge of athlete activism, are fine with that. The International Olympic Committee, however, is not.

With the July 23 opening of the Tokyo Games nearing, American and international Olympic officials are disputing where to draw the line for protests as athletes across the sports world, however contentious the issue has become, leverage their power and influence to promote social and political causes.

A number of athletes are signaling the possibility of testing the limits with some kind of gesture at the Games. Among them is Berry, who has called the anthem’s lyrics disrespectful to Black Americans.

“When I get there I will figure out something,” she said after earning the final spot in her event on the U.S. team. “What I need to do is speak for my community, represent my community, and help my community, because it is so much more important than sport.”

Berry’s actions at the U.S. trials made her a target for criticism from conservative politicians, with some calling for her to be dropped from the Olympic team. That will not happen. She did not violate the national Olympic committee’s rules on free expression.

Leaders of the U.S. Olympic & Paralympic Committee announced in December that they would not punish American athletes who exercise their free speech rights at the Games, so long as they don’t express hatred toward or attack any person or group.

But the I.O.C., which on Friday announced new rules allowing more freedom of expression by athletes at venues, said all demonstrations would be forbidden on the medals podium, on the field of play during competition and at the opening and closing ceremonies.

The new rules would tolerate, for example, an athlete wearing a shirt with a slogan or raising a gloved fist or kneeling, if it happened before the start of a competition, including during athlete introductions.

Athletes have long been free to express political views during news conferences, on social media or in the “mixed zone,” where they speak with the news media after competition.

Yet the podium, where national flags are raised and national anthems played, has come to be seen as a red line. It’s not clear what the penalties for violating the new rules will be; the I.O.C. has the power to strip medals and banish athletes from the Games, though it would not tip its hand now beyond saying each case would be evaluated individually.

The U.S. has taken the position that, whatever the I.O.C. does, it won’t punish or reprimand athletes who make political statements. National Olympic committees and international sports federations can suspend athletes from competition, and as signatories to the Olympic Charter, they theoretically have to carry out a punishment demanded by the I.O.C.

“They have the authority and the jurisdiction and a unique set of sanctions,” Sarah Hirshland, chief executive of the U.S.O.P.C., said last week of international Olympic leaders. “We sit in a different seat.”

International Olympic leaders were not pleased. Hirshland said she had had “respectful but frank” conversations with I.O.C. leaders since she announced that her organization would not follow the Olympic protocol. Other I.O.C. and U.S. executives with knowledge of those discussions have described them as confrontational and acrimonious, with I.O.C. officials viewing their American counterparts as in violation of the Olympic charter.

Kirsty Coventry, an Olympic swimming champion from Zimbabwe who leads the I.O.C. Athletes’ Commission and is a close ally of Thomas Bach, the president of the I.O.C., said in an interview Thursday that all Olympians, regardless of nationality, must be treated the same.

“I can remember my first Olympics, being from a small African country, I felt just as important as the athlete next to me,” said Coventry, who competed in five Olympic Games.

The way I.O.C. leaders see it, they must navigate the interests of athletes from more than 200 nations, many with differing political viewpoints, and deter anyone from taking attention from another athlete’s rare chance to stand on a medal podium.

They argue that one athlete’s demonstration in support of equality and human rights could offend another. For example, Israeli athletes could perceive a gesture demanding Palestinian statehood as support for entities that have called for the destruction of Israel.

The breach between the Americans and international Olympic officials has developed after a period of détente between the two organizations, which were at odds for years. In 2017, after more than a decade of acrimony largely driven by disputes over money, the I.O.C. even altered its rules in a way that allowed the 2028 Summer Olympics to be awarded to Los Angeles ahead of schedule.

The leader of those Games, Casey Wasserman, began lobbying Bach more than a year ago to get rid of the I.O.C.’s ban on what it views as political speech. In June 2020, Wasserman wrote Bach telling him the rule was outdated. In an interview, he said the Americans wanted to avoid the hypocrisy of athletes potentially being punished for exercising their right to free speech on American soil during the 2028 Games and also to encourage the I.O.C. to acknowledge the changing times.

“I start from the position that being anti-racist is not political,” Wasserman said last week. “I also believe that given the role that athletes today play, the voice that they have, this is something that athletes are going to continue to express.”

The pressure from the United States and the influence of activism from athletes from several countries, including many of the world’s biggest sports stars, such as LeBron James and Naomi Osaka, have pushed the I.O.C. to continue to loosen its rules. That process has taken on new urgency as the Tokyo Games approach.

“There are not many times in the world where anyone can stand on a podium and be respected,” Coventry said of the decision to maintain certain prohibitions. “It’s really important to have the podium be clean and neutral. No one should ever be made to feel inferior on a podium.”

Many American athletes, however, believe that any limit on speech that does not express hatred “contributes to the dehumanization of athletes that is at odds with key Olympic and Paralympic values,” in the words of the U.S.O.P.C.’s racial and social justice committee.

“Athletes are humans first and athletes second, and part of being a human is being able to express yourself and express your views,” said Greta Neimanas, a two-time Paralympian in cycling who is the vice chair of the Athletes’ Advisory Council for the U.S.O.P.C. “The I.O.C.’s rule is in violation of that human right.”

Berry told the Black News Channel that she objects to the anthem because “it’s obvious” some of the lyrics allude to slavery.

“If you know your history, you’d know the full song of the national anthem. The third paragraph speaks to slaves in America, our blood being slain,’’ she said. “It’s disrespectful and it does not speak for Black Americans. It’s obvious, there’s no question.”

She may not be the only American athlete to demonstrate in some way. Noah Lyles, the world champion in the 200 meters, wore a black glove and raised his fist on the track during the U.S. trials.

“Everybody knows what my views are toward social justice,” Lyles said after his final race at the Olympic trials. “I can’t do everything by myself, but I can make sure everybody knows what I think, and if they want to have conversations and say, ‘Hey, that isn’t right,’ that’s when we get together and get this changed. That’s what I’m here for. I’m here to get the conversation moving and press the agenda forward.”

American and international Olympic officials do not agree on how athletes overall feel about the issue.

During the past year, the I.O.C. Athletes’ Commission surveyed athletes about the free speech issue. The commission reported that more than two-thirds of 3,547 athletes from 185 countries said political speech and other forms of demonstration should not occur on the field of competition, during the opening ceremony or on the medal podium.

However, Neimanas said a survey of American athletes had revealed overwhelming support for letting athletes decide when and where to express themselves.

The I.O.C. has never gone as far as stripping medals because of political statements, but it has sent athletes home from the Games and permanently banished some for either a protest or what it perceived as disrespectful behavior on a podium. But it has been a long time since such a punishment was handed down.

In 2016, Feyisa Lilesa of Ethiopia took second place in the marathon and, as he passed the finish line, crossed his arms in a gesture made by the Oromo people in protest of brutal police crackdowns. Lilesa’s use of the gesture — on the final day of the Games — was a clear violation of Olympic rules, then and now. Bach decided not to punish him.

Hirshland said athletes had sought answers about penalties and ramifications. Is there an appeals process? How quickly would an appeal be heard? “The clock is ticking and we don’t have a lot of time left,” she said.

David Wallechinsky, a leading Olympic historian, said he thought the I.O.C. was less concerned about what might happen at the Tokyo Games than about what could transpire at the Winter Olympics in Beijing in February, in a country known for suppressing free speech.

“This is not just about U.S. athletes,” Wallechinsky said. “There are athletes from other countries with their own concerns, and entire teams with human rights issues.”