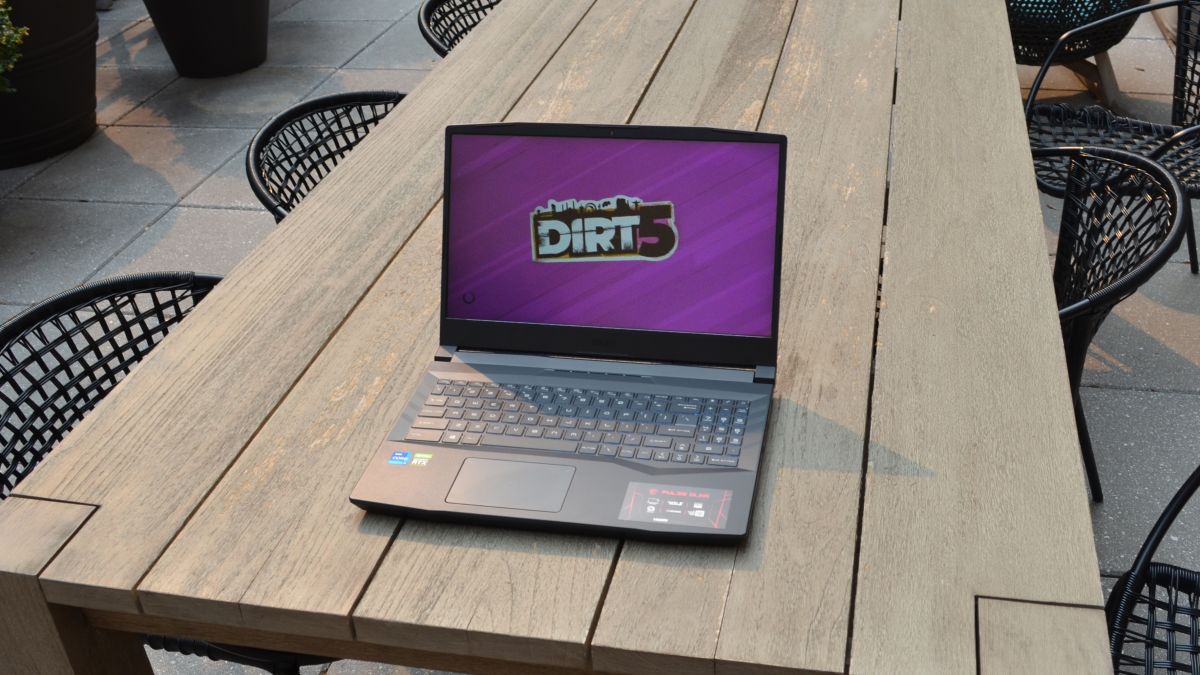 The MSI Pulse GL66 is an excellent midrange gaming laptop so long as you don’t take it anywhere and value doesn’t mean anything to you.

First, the positives. The Pulse GL66 puts out some fantastic gaming performance, even consistently getting 35 to 40 fps in Cyberpunk 2077 at max settings with ray tracing and DLSS on.

It also performed very well in some of our other performance benchmarks on top of generally being a great laptop to play games on, so there aren’t many games that this laptop won’t be able to chew through. Even the base configuration has at least a 512GB PCIe NVMe SSD, so you’ll also have room to download more than one or two at a time.

The display is also a 144Hz refresh display, and while it’s only 1080p,  you don’t need anything more than that on a gaming laptop this size. The bezels aren’t going to win any awards for design, but it’s a gaming laptop, so that likely isn’t going to be a deal-breaker for you.

Unfortunately, some things drag the MSI Pulse GL66 down considerably, most notably its battery life. The Pulse GL66 barely cracks three hours while simply playing a looped Blu-Ray. This was typical a couple of years ago, but not in 2021.

This is not a gaming laptop that you can game on away from a wall outlet, so it’s really a desktop replacement for those who don’t have a ton of money to throw at an actual desktop replacement. There are also much better gaming laptops that a little bit more expensive but have significantly better performance as well as battery life.

The MSI Pulse GL66 is available right now in the US, UK, and Australia. Starting configurations vary between regions, but the entry level model in the US comes with an Intel Core i5-11400H, Nvidia RTX 3050, 8GB RAM, and a 512GB NVMe SSD for $949.

The model we reviewed, with its specs listed off to the side, has an MSRP of $1,499.

The design of the MSI Pulse GL66 isn’t taking any risks, which is a shame as far as we’re concerned since we’d like to see gaming laptops start to shake things up a bit. But that’s more a matter of personal taste, so if you’re a fan of the traditional gaming laptop aesthetic, have we got a laptop for you!

The Pulse GL66 takes as its inspiration a cohort of far-future fighters in titanium powered-armor, wielding pulse energy weapons, and – well, you get the idea. Does nail its source material? We’ll let you be the judge.

There is excellent airflow underneath though, with a large, fairly open honeycomb grill that even lets you get a good look at the internals, which actually does add something to its look. Just don’t sit it in a puddle, whatever you do.

For a laptop this large and thick, we’d have liked to see more ports – especially a second USB Type-C – but there are enough ports to get the job done for the most part. The Australian Pulse GL66 model also comes with DisplayPort and HDMI 2.1 ports, so you can output 8K video at 60Hz and 4K video at 120Hz, respectively.

The keyboard is a bit cramped with the tenkey and the trackpad isn’t the greatest, but you probably shouldn’t expect to play games using the trackpad, so its more than enough for everyday, non-gaming use.

The full-sized keyboard doesn’t allow for top-firing speakers along the side, however. In our experience, the sound quality was decent enough for our non-gaming needs, but for gaming, we pretty much always suggest using one of the best gaming headsets you can get rather than built-in speakers, and that’s definitely still the case.

The MSI Pulse GL66’s performance is actually quite good, scoring well in our benchmarks as well as performing well in our general experience playing some demanding AAA games like Cyberpunk 2077, Metro: Exodus, and Dirt 5. In a world where the Pulse GL66 stood alone, it would stand out.

The problem for the Pulse GL66 is that it doesn’t; it’s facing off against some of the best gaming laptops out there like the Lenovo Legion 5 Pro, the Asus ROG Zephyrus G15, and the Razer Blade 14.

The best that can be said in most cases is that the Pulse GL66, as reviewed, is a good bit cheaper than some of its competitors, and somewhat cheaper than most. Its entry level configuration (in the US at least) is also much cheaper than its competitors, making it probably the one model we’d suggest you target if you have about $1,000 / £1,000 to spend on a gaming laptop (Australia being what it is, availability might be more of a determining factor there than anything else).

But if you’re in the fuzzy middle around $1,500 / £1,300 / AU$2,600, then the Pulse GL66 really starts to lose ground. For just $100 more in the US, you can get the Legion 5 Pro, which comes with much better hardware and a huge increase in gaming performance. If you can, stretching even further to the Zephyrus G15 is also worth doing, even if it means putting off buying a new gaming laptop for a month or two while you save up the extra money.

Really, the MSI Pulse GL66’s performance is only really impressive if you have a hard ceiling on your budget and the MSI Pulse GL66 MSRP is as high as you can go. If so, then the Pulse GL66 is still a great gaming laptop that is more than capable of playing the latest games without much fuss, which might be all you’re looking for.

The webcam and microphone are perfectly functional and we didn’t have any issues during our remote meetings being seen and understood.

The 720p (30 fps) webcam is pretty standard as far as laptop webcams go, but there are a couple of things to note. First, it’s a nice thing to have, since some gaming laptops like the Asus ROG Zephyrus G15 don’t even have one, so put a point in the MSI Pulse GL66’s column.

Then, pop that point right back out because the Pulse GL66 doesn’t have a physical privacy shutter over its webcam, which nowadays should be a standard privacy feature on every webcam – laptop or otherwise. If Lenovo can squeeze a physical privacy shutter into the Lenovo ThinkPad X1 Carbon Gen 9, there is no excuse for a gaming laptop that will likely live on your desk and face your bedroom or living room most of the time not to have one.

Battery life is the one areas where the MSI Pulse GL66 objectively underperforms on its merits.

We historically don’t expect much in the way of battery life from gaming laptops since the hardware and the performance demands from gaming are simply enormous relative to just about everything else you’ll use the laptop for. Even by those strict – and increasingly outdated – standards, the Pulse GL66’s three hours and 17 minutes of battery life our in PCMark10 tests and three hours and five minutes of HD video barely pass muster.

Times are changing though, and now it’s not unusual to see a gaming laptop running serious hardware getting five or six hours of battery life, like the Legion 5 Pro’s roughly six and a half hours across both our PCMark10 and HD movie tests. Compare this to the  and there’s no way around the fact that the Pulse GL66 should last far longer than it does.

In fairness, the Legion 5 Pro’s battery is also a more substantial 80WHr, as opposed to the Pulse GL66’s 53WHr battery, but given the bulk and thickness of the Pulse GL66, a larger battery could definitely have been accommodated. It’s not like MSI was aiming for portability here.

The MSI Pulse GL66 doesn’t come with a lot of bloat, which is good since it can go either way at this price point. Perennial offender McAfee is an issue, especially with its obnoxious pop-ups via desktop notifications. MSI isn’t alone in this though, and it happens with even our favorite laptops, so take this as a slam against McAfee (which we will continue to do until they stop this nonsense) and not against MSI.

The only other major bit of software of note is the MSI Center, which allows you to control the laptop’s hardware according to different settings like best performance, battery saver, and the usual presets on these kinds of command centers.

Our test scores reflect balanced settings for comparison purposes, but it’s worth noting that the Pulse GL66’s hardware controls are quite good. Since this laptop will likely live on your desk pretty much exclusively, setting the system to ultra performance is really the only way to go – assuming you’re cool with it sounding like a jet engine.

You have a hard ceiling on your budgetThe MSI Pulse GL66 is a great gaming laptop, but there are even better ones a rung or two higher on the price ladder. If this is as high as you can go, you’ll definitely get great gaming performance out of it.

You’re looking to spend less than $1,000 / £1,100The starting configurations of the MSI Pulse GL66 in the US and UK are pretty aggressively priced on the low end for the hardware they offer, so this is a great buy for anyone whose budget ceiling just nips north enough to include them.

You have wiggle room in your midrange gaming laptop budgetFor just a little bit more money, you can get significantly better gaming laptops. If you can afford to spend a little more money – or you’re willing to save up a bit longer – it’s worth going with those rather than the Pulse GL66.