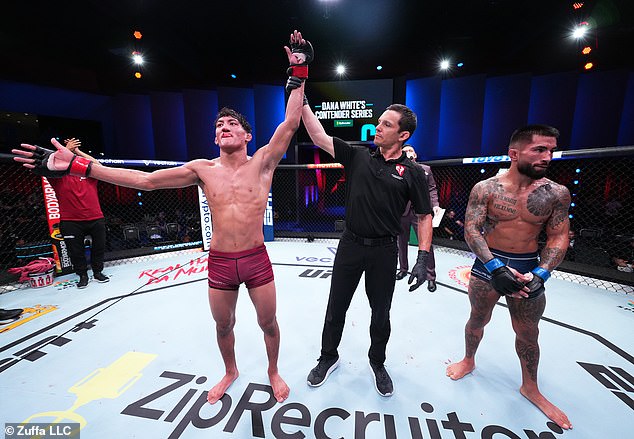 Raul Rosas Jr. becomes youngest UFC fighter ever at just 17 with dominant win The Mexican teenager has declared that he will be UFC champion by 20 UFC president Dana White says he’s never seen anything like this

Raul Rosas Jr. isn’t legally old enough to drink alcohol in the USA, but the 17-year-old  will soon be fighting in the UFC after dominating his opponent on Dana White’s Contender Series and making history as the organisation’s youngest fighter ever.

The Mexican bantamweight, who says he’s been beating up grown men for as long as he can remember, earned an impressive decision victory against 25-year-old Mando Gutierrez on Tuesday night at the UFC Apex in Las Vegas.

Mexican 17-year-old Raul Rosas Jr. has made history by becoming the youngest UFC fighter ever when he defeated Mando Gutierrez on the Dana White Contender Series (pictured) 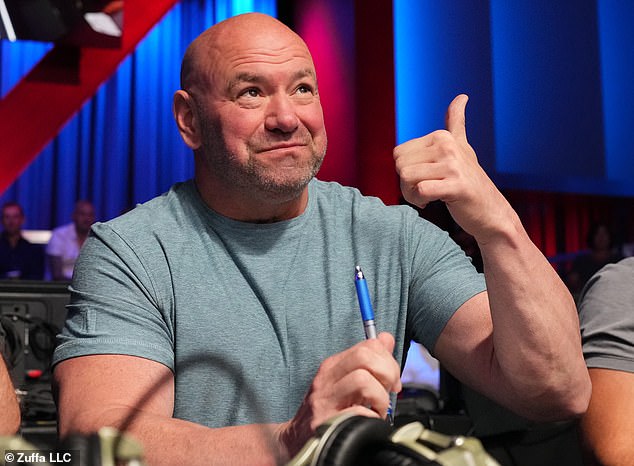 UFC boss Dana White was very impressed with the dominant display from the teenager, saying he’d never seen anything like ‘The Problem Child’

Following the fight it was announced that Rosas would indeed be getting a full-time UFC contract, with the organisation’s president Dana White singing ‘The Problem Child’s’ praises.

‘There was nothing to even discuss. We didn’t even talk about it back there. I’ve never seen anything like it,’ said White.

‘He is absolutely, positively talented. He’s special. He’s different. At 17 years old you just don’t see kids handling themselves like that.’

‘I’m very, very impressed with this kid. He’s absolutely special. The amount of fighters that were blowing me up going, ‘Oh my God. This kid is for real. This kid is legit. Impressive.”

Rosas is undefeated as a professional and the contract with the world’s biggest MMA organisiation will be absolutely life-changing for him and his family. 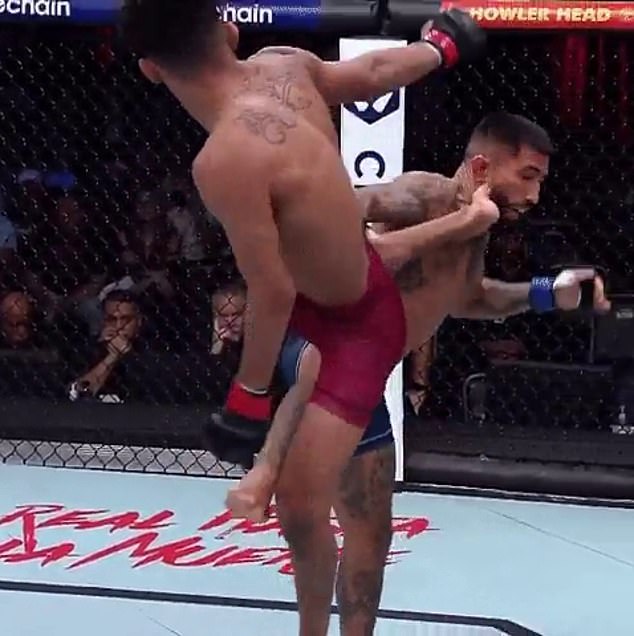 ‘Like I said, I’ll be happy but not satisfied. The goal is that UFC title and to become the youngest UFC champion. I just want that contract to be able to get a step closer to my dream.’

Since he turned pro, the Mexican says promoters have often hesitated to book him because of his age – but their doubts diminished significantly after seeing Rosas dominate everyone put in front of him. 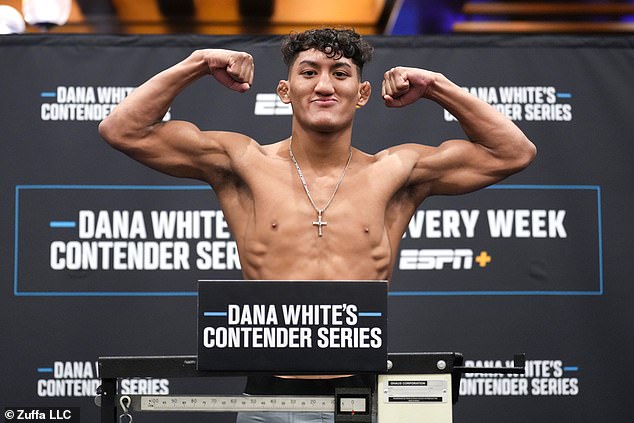 ‘Since I was little, I knew what I wanted. I know what I want and I’m going to get out there and get it.

Due to his age, Rosas Jr needed to get permission from his parents and sponsors to gain a licence to fight in the Octagon. 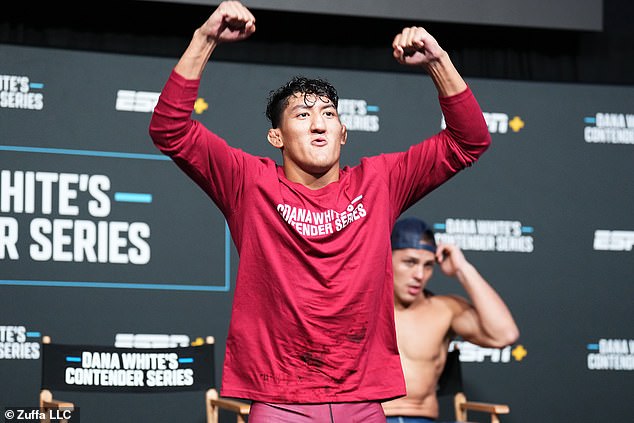 Due to his age, Rosas Jr needed to get permission from his parents and sponsors to gain a license to fight in the Octagon

‘All I had to do was a notary. My friend signed it,’ said the teenage sensation.

‘That’s the only thing that I had to do, [my manager] Jason House did all the rest. I think he sent film to the commission and said why I’m ready to compete at this level and the commission approved.’

Rosas Jr. has vowed to become a UFC champion by age 20.

The competition’s previous youngest fighter was featherweight Chase Hooper, who was 19 when he was also signed through the Contender Series.