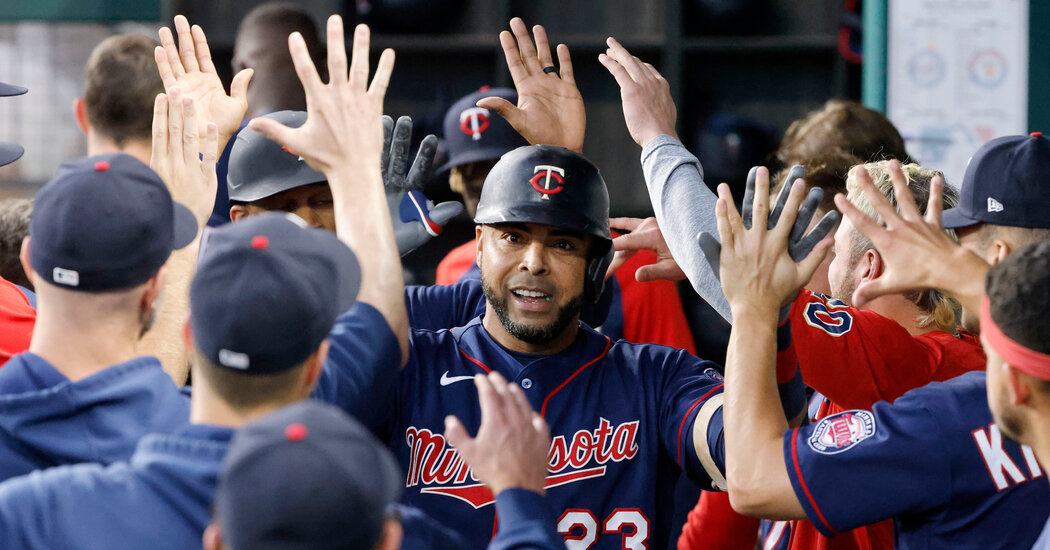 In baseball, the lineups of late July can look like relics within a week. Six years ago on Friday, the Mets used left fielder John Mayberry Jr. as their cleanup hitter against Clayton Kershaw of the Los Angeles Dodgers. Eight days later, Yoenis Cespedes was on his way to New York; the Mets were on their way to the World Series; and Mayberry’s career in the majors was over.

The end of July is decision time in the majors. Contenders shed replacement-level retreads and upgrade through trades. Also-rans dump veterans, save money and gather prospects. Teams in the middle tread carefully and tend to stay right where they are.

Then you have the Tampa Bay Rays, forever allergic to conventional methods. The Rays made July’s first big deal on Thursday, acquiring the slugging designated hitter Nelson Cruz, who just made his seventh All-Star team, from the Minnesota Twins for two pitching prospects.

On Friday, though, the Rays made a surprising deal for a team in a playoff position, trading the left-hander Rich Hill — their leader in starts, with 19 — to the Mets for a Class A catcher, Matt Dyer. (The Mets also sent an injured reliever, Tommy Hunter, to roughly balance out Hill’s salary.)

Rays General Manager Erik Neander said the team wanted to give a longer look at a top starting prospect, Luis Patino, and also expected the veteran Chris Archer to return in August from a forearm injury.

“We think the world of Rich, and he’s going to give the Mets exactly what they need,” Neander said. “For us, it was a chance to acquire a player we like some, and help us balance our length options as we proceed here.”

The Mets will be the 11th major league team for Hill, a curveball specialist who is 6-4 with a 3.87 earned run average. He was named the American League’s pitcher of the month for May, but has a 5.40 E.R.A. in his last seven starts and has worked more than five innings only once.

Even so, Hill should help the Mets, whose ace, Jacob deGrom, is on the injured list with forearm tightness. With Carlos Carrasco, David Peterson and Joey Lucchesi also on the injured list, the Mets’ rotation was down to Marcus Stroman, Taijuan Walker and the rookie Tylor Megill. Hill — the oldest pitcher in the majors, at 41 — fills a glaring need.

“He’s a guy that’s been around for years now, a lot of experience, pitching good baseball, pitching playoff baseball,” Manager Luis Rojas said. “It’s a great fit. Our front office is being diligent. We talked about our starting pitching need, and this is a guy that fits right in.”

The Mets have a hole in the lineup, too, with shortstop Francisco Lindor out because of a strained right oblique, but no other consistent competitors have emerged in the National League East. Atlanta has upgraded around the margins this month with trades for catcher Stephen Vogt and outfielder Joc Pederson, but replacing their best player — outfielder Ronald Acuna Jr., who is out for the season with a torn anterior cruciate ligament — will be impossible.

Vogt’s previous team, the Arizona Diamondbacks, is an obvious seller, with the worst record in the majors. Pederson’s previous team, the Chicago Cubs, is a more intriguing seller. The Cubs went 5-17 from June 25 through Thursday, putting them far behind the N.L. Central-leading Milwaukee Brewers and reinforcing the notion that they will not win another title with this core.

By facing that reality, the Cubs could make a major impact on the pennant race. They have four stars who will be free agents after the season: shortstop Javier Baez, third baseman Kris Bryant, closer Craig Kimbrel and first baseman Anthony Rizzo. A reunion of Rizzo and the Red Sox — who drafted him out of high school in 2007, traded him before he reached the majors and now just happen to need a first baseman — would read like a fairy tale.

The trick for the Cubs, in all their deals, is to find a rival as desperate for a rental as they were in 2016, when they traded a future All-Star shortstop, Gleyber Torres, to the Yankees for Aroldis Chapman, the closer the Cubs needed to win their first World Series in 108 years.

The Washington Nationals are another recent champion with an enticing rental superstar: starter Max Scherzer. The Nationals’ general manager, Mike Rizzo, is wired to compete, not retreat. But with Patrick Corbin struggling and Stephen Strasburg out nearly all season with shoulder and neck injuries, the Nationals seem to have little hope of reaching the playoffs.

As a 10-year veteran who has spent the past five seasons with his current team, Scherzer has the right to veto any trade. But it would be hard to imagine Scherzer, who turns 37 on Tuesday, passing up another chance to pitch in October before he reaches free agency this fall. He has been typically dominant — 7-4 with a 2.83 E.R.A. and 142 strikeouts in 105 innings — and could make a significant impact in a postseason series.

The Nationals used a standout rotation — Scherzer, Strasburg, Corbin and Anibal Sanchez — to win the 2019 World Series, and the Dodgers, who won it last year, tried to stack aces this season in an attempt to repeat. But their depth has been tested: Trevor Bauer is on administrative leave as Major League Baseball investigates sexual assault allegations against him; Kershaw is out with forearm inflammation; and Dustin May had Tommy John surgery in May.

Adding a starter like Scherzer to Walker Buehler and Julio Urias would restore the Dodgers’ biggest strength as they chase the surprising San Francisco Giants in the N.L. West. But the Nationals, given their track record and the vulnerability of the Mets, could just as easily be buyers — leaving pitchers like Jon Gray of the Colorado Rockies and Michael Pineda of the Twins as the most desirable free-agents-to-be among starters on non-contenders.

The Twins’ Jose Berrios and the Texas Rangers’ Kyle Gibson, who are under team control through 2022, could also be dealt, and veteran relievers are always readily available: Think Greg Holland of the Kansas City Royals, Ian Kennedy of the Rangers, Richard Rodriguez of the Pittsburgh Pirates, Joakim Soria of the Diamondbacks and so on.

The Rockies could offer Daniel Bard and Mychal Givens from their bullpen, plus Gray and everyday players like first baseman C.J. Cron and shortstop Trevor Story, who are both potential free agents. But the Rockies have been without a permanent general manager since Jeff Bridich resigned in May, leaving the interim G.M., Bill Schmidt, in charge of far-reaching decisions for the franchise.