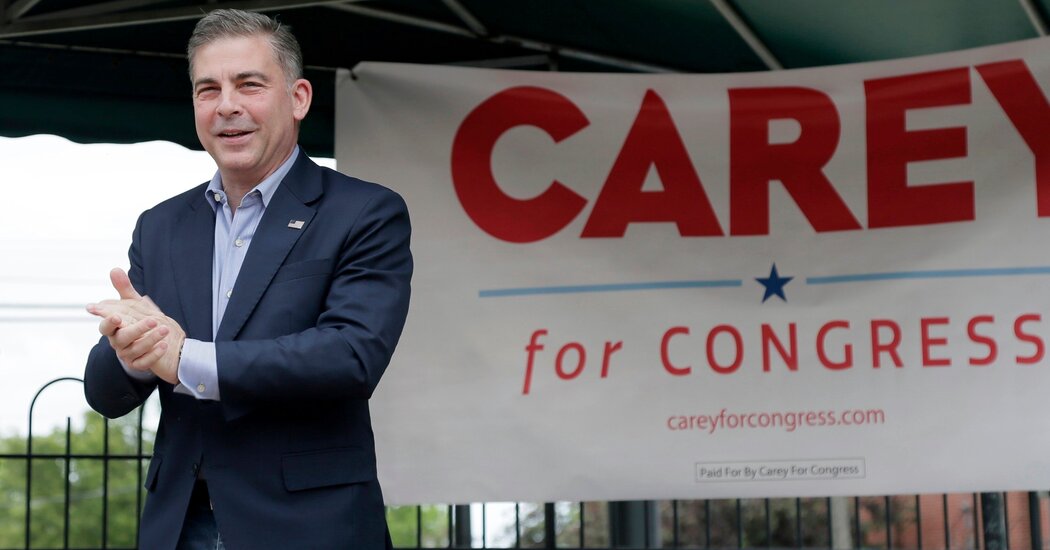 Mike Carey, an energy lobbyist and newcomer to elected office who was endorsed by former President Donald J. Trump, won a Republican primary race for a House special election in Ohio on Tuesday night that demonstrated Mr. Trump’s continuing influence over the G.O.P.

Mr. Carey, who was largely unknown before the endorsement, beat out 11 competitors, many of them with much longer records in Ohio politics. As of 9 p.m. Eastern, he had about 36 percent of the vote, well clear of his nearest rivals. He will advance to the general election in the heavily Republican 15th Congressional District near Columbus.

Mr. Trump’s credibility as the gatekeeper for the Republican Party had been in question after the candidate he endorsed in a special House election in Texas lost last week. In that race, a state representative, Jake Ellzey, beat Susan Wright, the widow of the former congressman who held the seat until he died in February after battling lung cancer and being hospitalized for Covid-19.

Last week, the pro-Trump group Make America Great Again Action made a last-minute purchase of nearly $350,000 in text messages, digital ads and television commercial in support of Mr. Carey. Throughout the race, Mr. Carey pointed to the Trump seal of approval as his primary selling point.

To the north, in the Cleveland and Akron area, Democrats were awaiting the outcome of a House primary in the deep-blue 11th District pitting Shontel Brown, a county party official backed by national party leaders, against Nina Turner, a former state senator and progressive activist who had openly defied the Democratic Party.

Between the two races, the Democratic fight was the most closely watched as a national bellwether. Money from national interest groups and prominent Democratic politicians cascaded into the district over the last several weeks, leaving a trail of ill will and weariness in their wake.

The race was not as much emblematic of a liberal-moderate divide among Democrats as it was a clash between a party insider who rose fast in local party circles and an agitator who didn’t mind alienating party leaders by questioning their commitment to liberal ideals.

Outside political groups from all different corners of the Democratic coalition invested heavily in the race. Backing Ms. Turner were left-wing environmental interests supporting the Green New Deal; the political group founded by Senator Bernie Sanders that she once ran, Our Revolution; and two progressive groups that work to defeat Democrats they consider to be too centrist, the Working Families Party and Justice Democrats.

Supporting Ms. Brown were more institutional players and politicians like the political committee of the Congressional Black Caucus; several senior members of the caucus; Representative James E. Clyburn of South Carolina, the Democratic House whip; and, unofficially, Marcia Fudge, who vacated the seat this year to become Mr. Biden’s secretary of housing and urban development and consented to have her mother appear in an ad endorsing Ms. Brown.

Advertising attacking Ms. Turner’s professionalism and character was ubiquitous in the district during the final days of the campaign. One ad from the centrist group Third Way compared Ms. Turner’s political style and tone to Mr. Trump’s, and replayed an on-camera moment she has struggled to live down throughout the campaign in which she made a crude analogy to the choice between Mr. Biden, whom she did not support, and Mr. Trump.