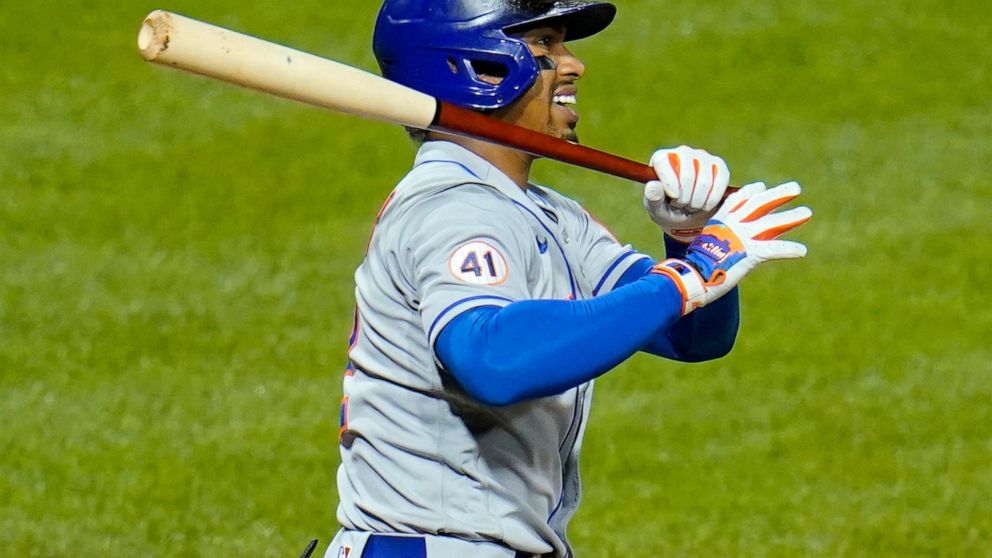 PITTSBURGH — New York Mets star shortstop Francisco Lindor is out indefinitely with a strained oblique and ace Jacob deGrom is sidelined with forearm tightness, the NL East leaders announced Saturday in their latest round of health setbacks.

The Mets didn’t put a timetable on Lindor’s return, but such injuries can often take a month or more to heal.

DeGrom felt discomfort Friday while throwing a bullpen season at Pittsburgh. An MRI hours later showed there was forearm tightness but no structural damage.

The right-hander hasn’t yet been slotted back into the rotation and there is no projection on when deGrom might pitch again.

“Right now, we’re treating the player for what he feels,” manager Luis Rojas said. “That’s how we’re approaching day to day until he feels good and can throw.”

DeGrom is 7-2 with a major league-leading 1.08 ERA in 15 starts this season despite being hampered by multiple ailments. He last pitched July 7 against Milwaukee.

Lindor was put on the 10-day injured list with a strain on his right side.

Lindor got hurt during Friday night’s 4-1 loss at Pittsburgh, wincing after he grounded out in the fifth inning. The four-time All-Star took a few steps out of the batter’s box but then peeled off toward the Mets’ dugout on the first base side.

The Mets have not said when they they think he might play again. New York began the day with a three-game division lead over Philadelphia.

“What’s I’ve learned, especially this year, is it’s a whole different situation for each injury,” Rojas said. “As much as you hear of similar injury grades, it’s just that each person heals differently. That’s why a timeline is tricky.”

“Francisco is in great shape, and we think he will approach his rehab the right way. We’ll take it week to week,” he said.

In his first season with New York after he was acquired in a January trade with Cleveland, Lindor is hitting .228 with 11 homers and eight steals in 88 games. He agreed to a $341 million, 10-year contract just before opening day.

“I’ll be glad to do whatever I can do to help the boys, to encourage them to work as hard as you can, celebrate each day,” Lindor said.

Luis Guillorme was slated to start at shortstop Saturday night. Jonathan Villar and Jose Peraza could also see action at the position.

“I refer to our depth,” Rojas said. “The front office has done a good job preparing for situations like this. We’re going to miss Francisco, but we’re covered.”

Beset by a long list of injuries, Mets just got third baseman J.D. Davis back from the 60-day IL on Friday. His return meant each of New York’s projected regulars were available for the first time in months.

“I have a lot of faith in the boys. We’re a resilient team,” Lindor said. “I’m not the first person to go down this year. I know the guys will continue to work as hard as they can and are going to win a lot more games with or without me.”

Blankenhorn hit .270 with four homers in 13 games for Syracuse. He appeared in 11 games for the Mets earlier this season, going 1 for 11.

The Mets are Blankenhorn’s fourth organization this season. He also has spent time in the farm systems of Minnesota, the Los Angeles Dodgers and Seattle.