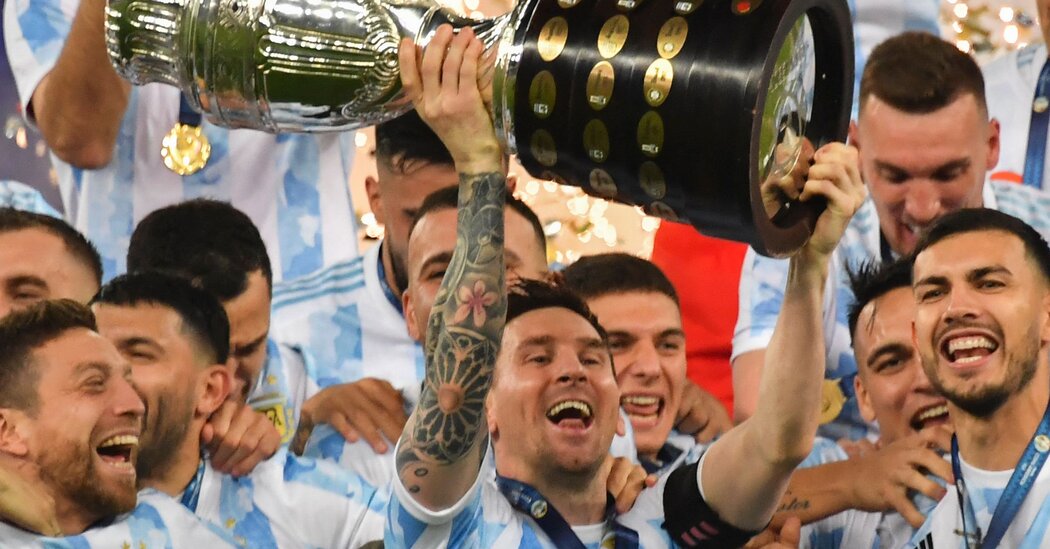 Lionel Messi finally ticked the last empty box in his glittering soccer career on Saturday night, leading Argentina past host Brazil, 1-0, in the final of the Copa América in Rio de Janeiro.

The trophy was Messi’s first with Argentina after a string of painful, agonizing, maddening failures, including perhaps the most demoralizing defeat of his career — against Germany in the World Cup final — inside the same stadium, Rio’s hulking Maracanã, in 2014.

When the whistle blew to end the final, Messi — his relief palpable — dropped to his knees and was immediately surrounded by his teammates. Moments later, they were lifting him above their shoulders and tossing him in the air.

“I needed to remove the thorn of being able to achieve something with the national team,” Messi said after the celebrations in the dressing room, according to The Associated Press. “I had been close for other years and I knew it was going to happen. I am grateful to God for giving me this moment, against Brazil and in Brazil. I was saving this moment for myself.”

In more than a decade at the top of his sport, Messi, 34, had won nearly every soccer honor imaginable with his Spanish club team, Barcelona: every award, every accolade, every cup, championship and trophy.

And year after painful year, he had failed to win a thing with Argentina.

His friend Ángel Di María delivered the prize at last, putting Argentina ahead in the 22nd minute after coolly collecting a long cross-field pass to the right wing from the deep-lying midfielder Rodrigo De Paul. Controlling the ball on the bounce with a single deft touch with his left foot after it skipped past the Brazil left back Renan Lodi, Di María then settled himself and — lifting the ball with the same foot on the rise off its next bounce — sent a shot over Brazil’s goalkeeper, Ederson, that landed softly in the back of Brazil’s net.

As Messi and the rest of Argentina’s team raced to celebrate with Di María, the Brazilians stood, stunned. The goal was only the third they had allowed in the tournament.

Messi had carried Argentina over the last month in Brazil as he chased the kind of trophy he had coveted for so long. He led the Copa América in scoring this summer, with four goals and five assists, but he had done that before, too, and then fallen short of ultimate victory.

The sting of repeated failures — at the World Cup in 2014, and in the Copa América final in 2015 and again in 2016 — had seen Messi retire from the national team at least twice. But both times he had relented, and returned, to chase that first senior title. This month, Argentina’s players had made it their mission to deliver it.

“Messi is one step ahead of all of us,” De Paul had said before the semifinals. “We are all on the same path. What matters is to win.”

“We gave it to Messi,” said Argentina’s goalkeeper, Emiliano Martínez, “who deserved it the most.”

Saturday’s game was the feisty, fiery affair everyone had expected from the two biggest powers in South America; a six-inch piece of the Brazilian star Neymar’s shorts was torn away in the first half, and Messi dived in with a rare scissoring sideline tackle at one point.

Chasing the game, Brazil sent on a wave of attackers after halftime: Roberto Firmino came on at the break and was followed, later, by Vinicius Júnior and Gabriel Barbosa as Brazil pressed for the tying goal.

Richarlison thought he had tied the score in the 52nd minute when he ran on to a lead ball from Lucas Paquetá and slotted home a low shot. But replays showed that he had broken a split-second early, and the goal was disallowed for offside.

Two minutes later he was in again, onside this time, but his shot was stopped at close range and pushed aside by Martínez.

The chances kept coming, on both sides — even Messi stunningly blew a one-on-one in the goal mouth late in the game — but as the minutes ticked away, and as the tackles got rougher and the dives and the pleas for foul calls more emphatic, the score did not change.

Messi was, at last, a champion in Argentina’s blue and white.