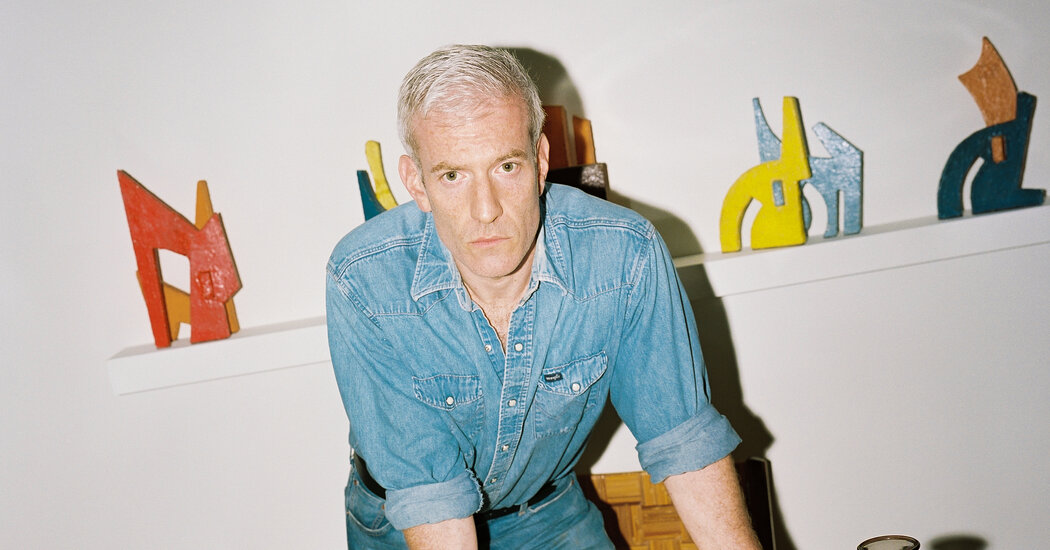 The fashion stylist Mel Ottenberg, 45, has dressed some of the world’s most influential celebrities (Rihanna and Justin Bieber) and worked with the biggest brands (Dior, Nike and Calvin Klein).

For the past three years, he has also been the creative director of Interview magazine, the jumbo newsprint tome founded in 1969 by Andy Warhol. This month, he has been named as its next editor in chief.

I met Mel, who’s my Greenwich Village neighbor, the other day at my Covid “office” (a.k.a. my favorite bench) in Washington Square Park to chat about his upcoming takeover. We knocked heads under a big ginkgo tree where he laid out his plans to change it all up and discussed the ways pop culture, celebrity, superficiality, entertainment and magazines fit into our new apocalyptic paradigm of life.

So Mel, in the craziest, most existential moment any of us has ever lived through, you are going to be the new editor in chief of Interview magazine. How does it feel to inherit the stewardship of such a historical, pop-cultural platform?

I’m so excited to continue this amazing legacy that I’ve loved since I can remember.

When Nick Haramis (the previous editor in chief) and you (as the creative director) reinvented Interview three years ago, I loved what you guys did. The spirit of how you modernized it — the cultural mix, the fashion, the high-low glam-punk vibe, the intelligence, the casual way you addressed celebrity — just spoke to me. Will we see a big change with your first issue in October?

Yes! Now that the world might be ending, it’s like, “Hey, let’s make a magazine when nobody looks at magazines anymore.” It’s fun because now you can do anything. I get to take risks and switch things up. I get to surprise people. As editor in chief, my vibe will be about rapid change and taking chances.

Do oversized magazines fit into the zeitgeist these days?

What inspires you from Interview’s heritage?

Andy Warhol! And that energy that makes people want to be a part of our cool party. Different eras also inspire me: The ’70s with Andy in New York is the ultimate everything to me, the glamour and excitement of the ’80s, the ’90s with Ingrid Sischy, the covers, the illustrations, and the mix of superstars and nobodies. It’s all in some weird Cuisinart in my head.

My dearest friend, Paige Powell, used work alongside Andy at the magazine in the ’80s and would always tell me how the most famous people would just pop by the factory for lunch. Everybody wanted to have lunch with Andy because they knew they might meet a young amazing artist, a duchess or a hot-looking D.J. It was all about the mix. Paige was the hostess with the mostest curating these gatherings. She was always trying to sell ads, so she’d invite a potential bigwig advertiser to lunch, too. Then she’d always get the ads. Andy loved it.

The authenticity of what Paige was talking about is something that I absolutely aspire to and believe in. There are huge stars in our September issue that are there because they want to have fun, be sexy and have cool conversations.

I’ve never been a celebrity person. Our philosophy at Paper was always to treat “somebodies like nobodies and nobodies like somebodies.” I think many famous people enjoy being treated like regular people.

You’ve always worked with lots of really famous people in your styling career. Do you think pandemic life has been difficult for them to cope with?

Something’s also changed with the power of celebrity. You can have a hundred of the biggest celebrities in the world endorsing a candidate these days and it doesn’t move the needle. Are celebrities losing their juice? Do people still care as much as before?

I feel the cult of personality is never ending. Hey, I’m still obsessed with Cardi B, and look at how electrified the world is (including me) at the resurgence of Bennifer or Channing Tatum and Zoë Kravitz now being a new couple. People are like, “Thank God we’re looking at paparazzi pictures of celebrities again.”

Do you find celebrity egos a bit tamped down from all this? Are stars acting a little less diva-ish?

Yes! I think they’re being a little more human. I also think famous people are a bit more open right now to creativity and being more daring.

Do you think these dark times have changed people’s relationship to superficiality — whether celebrity, fashion, trends, materialism?

With all the heavy problems we’re facing, I think people still want superficiality. Look at how Instagram has become everybody’s résumé. Or the explosion of TikTok, a creative narcissistic void, that I totally love. You can be very serious about what’s going on in the world but still love Bennifer. Interview will be a place where you can find very superficial things and very challenging thinking.

Are you going to the Met Ball? Will it be different from other Met Balls this time? Will celebrities actually attend in the middle of this Delta scare?

I’m not going, but I hear there’s a lot of influencers going. The Met Ball always meant a lot to me. When I’m dead, they’ll remember all the things I styled.

One last question: What’s up with your Baz Bagel love affair? You’ve put that hip little Grand Street bagel place on the map. They even named a sandwich after you!

It’s a turkey Reuben on a pumpernickel everything bagel. I’m equally proud of having a signature bagel sandwich as being the new editor in chief of this American institution.

The interview has been edited.

Kim Hastreiter, who co-founded Paper magazine and was its editor from 1984 to 2017, is writing two books and co-producing a film. Earlier this year, she published a free newspaper, The New Now, about creative New Yorkers during the pandemic.