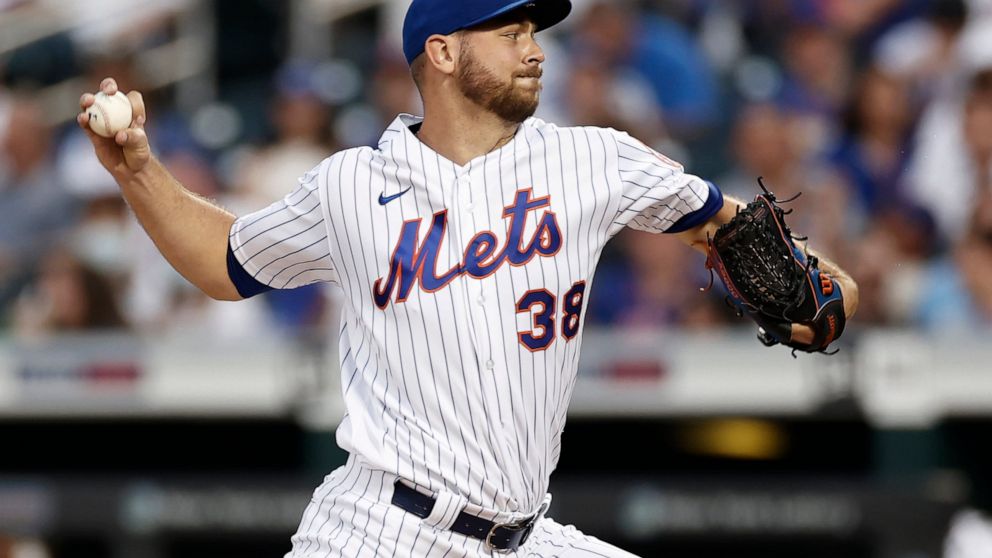 Megill (1-0) allowed two hits, walked one and struck out five as the rookie right-hander lowered his ERA to 2.10 a few hours after the Mets bolstered their injury-plagued rotation by acquiring Rich Hill from Tampa Bay. New York has eight starters on the injured list, including ace Jacob deGrom.

Alonso continued his post-Home Run Derby surge, hitting a two-run shot off former teammate Steven Matz (8-5) in the first inning before adding a solo blast off Ryan Borucki in the eighth. Alonso has four homers in his last four games.

The Blue Jays got just one runner beyond first base against Megill and a trio of relievers. Bo Bichette drew a one-out walk in the first and stole second as Vladimir Guerrero Jr. struck out but was stranded when George Springer — who was pursued by the Mets in the offseason before signing a six-year deal worth $150 million with Toronto — popped out to shortstop.

Seth Lugo tossed a one-hit seventh, Trevor May threw a perfect eighth and Edwin Diaz snapped a streak of three straight blown saves by striking out one in a perfect ninth for his 20th save.

Matz, a Long Island native who was drafted in the second round by the Mets in 2009 and spent six years with the big league team, allowed four hits — including Megill’s single to right in the fifth — and three walks with five strikeouts in 5 2/3 innings.

Mets manager Luis Rojas said Friday afternoon he didn’t know when Rich Hill would slot into the rotation. The Mets do not have starters listed yet for Sunday’s series finale against the Blue Jays or Monday’s doubleheader against Atlanta.

The Mets aired highlights of Matz’s six seasons with the team as he warmed up for the bottom of the first. The video included photos of the pitcher meeting with first responders, and a clip of his grandfather cheering him on during Matz’s big league debut June 28, 2015, when he went 3 for 3 with four RBIs and earned the win by tossing 7 2/3 strong innings.

The montage ended with the words “Welcome Back Steven” on the screen. Matz received a warm ovation as he doffed his cap before a few notes of his traditional warmup song, “Call Me The Breeze” by Lynyrd Skynyrd, played over the loudspeaker.

Blue Jays: C Danny Jansen (right hamstring) was placed on the 10-day injured list. Jansen, who missed 23 games earlier this season with the same injury, was hurt Wednesday. Montoyo said Jansen “pulled it pretty good” and there was no timetable for his return. … OF Corey Dickerson (left foot) is moving closer to a rehab assignment. Dickerson has yet to play for the Blue Jays, who acquired him from Miami on June 29.

Mets: RHP Jacob deGrom (right forearm) threw for a third straight day. … IF Jose Peraza (broken right middle finger) wore a protective splint to field grounders during batting practice, but still can’t throw. … RHP Carlos Carrasco (right hamstring) threw a side Thursday and is a candidate to make his Mets debut either Sunday or Monday. He may also make a third rehab start on one of those days. … RHP Robert Stock (right hamstring) was shifted to the 60-day injured list to make room for Hill.