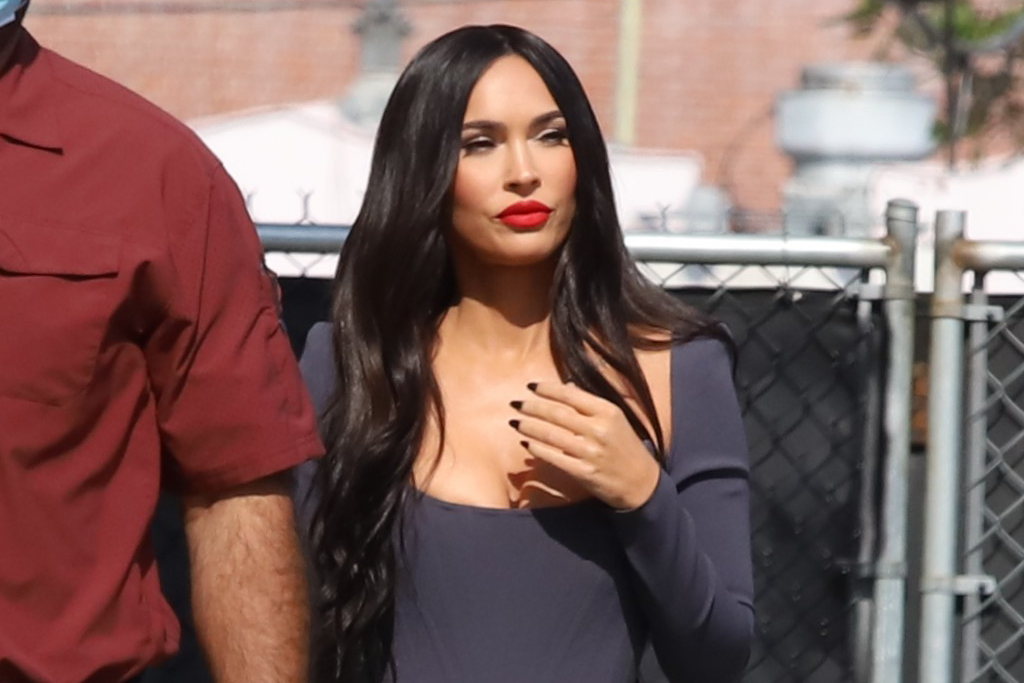 If there’s anyone who’s been having a “hot girl summer,” it’s Megan Fox.

The “Till Death” star has been at the top of everyone’s radars — and best-dressed lists — this season, due to her sleek looks curated with stylist Maeve Reilly. Fox is known for her edgy and effortless style, which Reilly has revamped to include pops of bold color and prints. When hitting the red carpet or events, the “Transformers” actress often makes statements in slim-fitting, richly textured dresses and sets by Mugler, Alex Perry and Mach & Mach.

However, Fox’s off-duty looks have also created waves in the fashion world, pairing distressed denim with tank tops, luxe blazers and jackets by Acne Studios, TRE by Natalie Ratabesi and Ksubi. While her ultimate accessory appears to be boyfriend Machine Gun Kelly, Fox is always dressed to the nines in glamorous heels that boast slick details like crystal embellishments, punchy colors and PVC uppers. Her sets of pointed-toe pumps, lace-up and platform sandals — all go-to styles throughout the season — usually come courtesy of Amina Muaddi, Femme LA and Alexandre Birman, among others.

As summer comes to a close, we’re looking back on the “Jennifer’s Body” actress’ boldest fashion moments throughout the season — which, along with her future ensembles, are sure to carry us through the rest of the year in style.

For a “Jimmy Kimmel Live!” appearance last month, Fox tackled the daring corset trend in a slim-fitting gray Alex Perry dress. The long-sleeved number was given a summer-worthy spin with ankle-wrap sandals by Femme LA — another popular pick this season.

While visiting Santa Monica, Calif., for dinner with her children and boyfriend Machine Gun Kelly, the actress paired a beige Alexander Wang bralette with distressed blue Ksubi jeans. Though the ensemble gained greater versatility from a coordinating Acne Studios trench, the star amplified its glam factor with a tiger print By Far shoulder bag and bejeweled Amina Muaddi platform sandals.

A late night Hollywood party for Chrome Hearts called for a slick evening ensemble – and Fox delivered. For the occasion, where she coordinated with MGK, the actress wore a leather jacket and skirt from the edgy brand over a black crop top. Her outfit gained added sleekness from a pair of minimalist PVC mules.

Even fight night calls for some glamour. Fox wore a casual coordinating gray tank top and jeans to watch a match between boxer Floyd Mayweather and social media star Logan Paul. To bring the look a burst of playfulness, the star paired it with a black nylon shoulder bag and clear pumps, accented by metallic stiletto heels.

One of the “Transformers” star’s most vibrant looks to-date took place on the iHeartRadio Music Awards red carpet. Fox looked like a real-life Barbie doll in a sweet pink silk corset top and flared pants, each adorned with crystal accents, by Mach & Mach. The star added even more glamour to her ensemble with a pair of the brand’s signature crystal-covered pointed-toe pumps — plus a sparkling Jimmy Choo clutch.

Fox’s sultry side came out for the 2021 Billboard Music Awards, which she attended with Machine Gun Kelly. The star coordinated her look with Kelly’s suit (and tongue) in a daring cutout Mugler dress with a sheer skirt, plus towering Jimmy Choo platform sandals.

For a date night in May, Fox, her kids and MGK visited Universal Studios Hollywood. The actress dressed more casually for a day at the park, wearing cream sweatpants and a sweatshirt with a graphic black camisole and dark canvas sneakers.

See more of Megan Fox’s fierce style on and off the red carpet through the years.