Meet the tallest teen in the world. He’s 15, from Montreal and is 7-foot-5 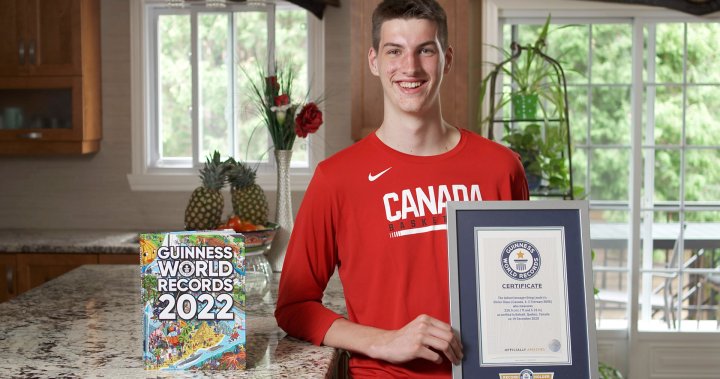 A teenager from Montreal’s East end is the new Guinness World Records title holder for tallest male teen in the world.

Sometimes, Olivier Rioux fits perfectly into his environment, while at other times things need to be tweaked — like when he goes to the hairdresser, who needs to stand on a stool to reach him.

That’s because 15-year-old Rioux stands at a little over seven-feet-five-inches tall and wears size 20 shoes, which are about 14 inches long.

Rioux towers over his own family; his mother, father and brother are all over six feet tall. In fact, he is used to sticking out everywhere he goes, ever since he was a (not so little) kid.

“He was in kindergarten at five-feet-two-inches,” says Rioux’s mom Anne Gariepy. “He was dancing with his teacher eye to eye.”

Rioux’s extraordinary height has caught the attention of the Guinness World Records, earning him a spot in the 2022 edition as tallest male teen in the world.

It’s a dream he’s been nursing since he was very young, flipping through Guinness World Record books.

“I see a page that is the tallest teenager and he wasn’t tall as me and I was like, ‘Maybe I can get it,’ and I get it,” Rioux said laughing.

His former basketball coach at Collège St-Jean-Vianney describes him as a gentle giant.

“A gentle giant… but I mean, don’t get it twisted, he knows how to play, he plays strong. He’s a very good basketball player,” said Terry Annilus.

Those attributes might help Rioux achieve his next dream: to play in the NBA.

Rioux is making strides to get there as a student at IMG Academy, one of the world’s most prominent sports schools.

Some of IMG’s notable alumni include tennis superstars Venus and Serena Williams.

“I’m very happy that he is able to achieve his dream,” said Rioux’s dad Jean-François Rioux. “I would really have liked my dad to see him through this. I’m very proud of him.”

Rioux is proof that embracing what makes you different can help you reach new heights.

4:10
One-man team on a mission to re-mesh basketball nets

He Won the Nobel. Why Are His Books So Hard to Find?