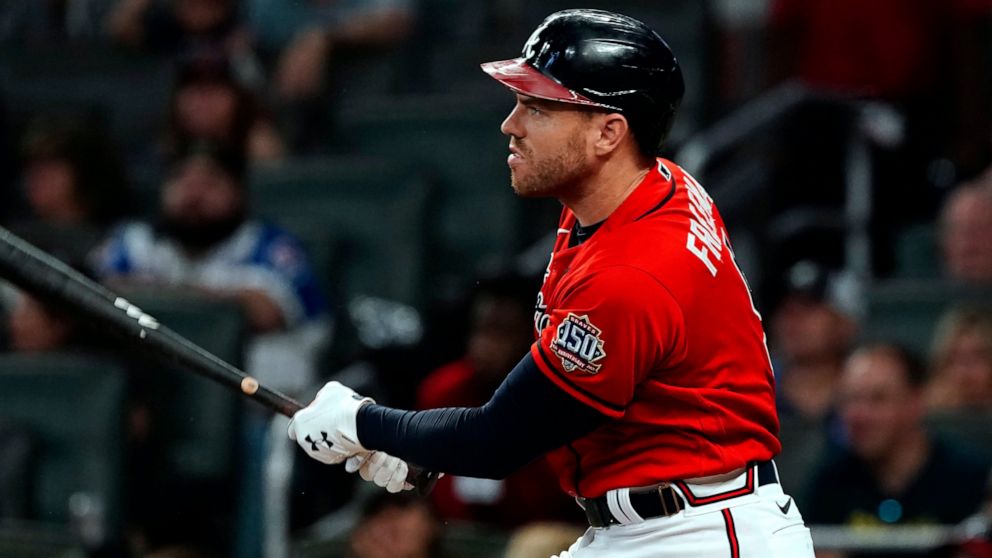 Meadows singled in the 10th inning to score Brett Phillips from second base with the tiebreaking run, and the Rays beat the Atlanta Braves 7-6 on Friday night.

After trailing 6-4, the Rays pulled even in the eighth. Meadows, an Atlanta native, had an RBI single during the two-run rally.

“That’s just kind of the Rays’ way,” Meadows said. “We never quit and we’re never down.”

“Meadows really picked us up in a big way,” manager Kevin Cash said. “The eighth inning … he really came through and then he came through again.”

It was Tampa Bay’s 27th come-from-behind win, the second-most in the majors behind Boston’s 29. The Rays remained 1 1/2 games behind the first-place Red Sox in the AL East.

With Phillips opening the 10th on second base, right-hander Jesse Chavez (0-2) walked Brandon Lowe before recording two outs. Chavez then gave up Meadows’ go-ahead single to right field, as Phillips slid across the plate and beat Abraham Almonte’s throw.

Freddie Freeman had four hits, including a two-run homer in the fifth. Austin Riley and Dansby Swanson also hit home runs for Atlanta.

Ji-Man Choi’s homer to lead off Tampa Bay’s fifth, an opposite-field shot he sliced just inside the left field foul pole, tied the game at 3-3.

Matt Wisler (1-1) had three strikeouts while allowing one hit in two scoreless innings. Pete Fairbanks pitched the 10th for his fourth save.

Charlie Morton, who won a combined 18 games for Tampa Bay the last two seasons before signing with Atlanta, allowed three runs on six hits and three walks in six innings. He had eight strikeouts.

“You score six runs and you should win, really,” manager Brian Snitker said.

The Rays tied the game at 6-6 in the eighth with two runs off Chris Martin. Joey Wendle’s infield hit drove in Wander Franco, who singled, from third base with the tying run.

After Rays starter Michael Wacha gave up a single to Almonte to start the bottom of the fifth, Freeman pulled a fastball from J.P Feyereisen over the right-field wall for his 20th homer and a 5-3 lead.

Outfielder Joe Pederson, acquired from the Chicago Cubs on Thursday, did not arrive in Atlanta in time to be included in the lineup. He was activated and grounded out as a pinch-hitter in the 10th to end the game.

About two hours after the game ended, the injury-depleted Braves announced they had acquired veteran catcher Stephen Vogt from the Arizona Diamondbacks for minor league first baseman Mason Berne.

The 36-year-old Vogt, a two-time All-Star with Oakland, batted .212 with five homers and 17 RBIs in 52 games for the major league-worst Diamondbacks this season. He has thrown out 10 of 30 runners attempting to steal.

Atlanta has struggled to replace injured catcher Travis d’Arnaud with the likes of Kevan Smith, William Contreras and Jonathan Lucroy.

Rays: RHP Nick Anderson threw batting practice in Port Charlotte, Florida, for the first time since being told in March he has a partially torn ligament in his right elbow. Cash said Anderson threw his fastball at 90-93 mph. “He came away from it feeling really good,” Cash said. … RHP Chris Archer (right forearm tightness) is scheduled to make a minor league rehab start on Saturday.

Braves: RHP Touki Toussaint (right shoulder) was reinstated from the 60-day injured list and could make his 2021 debut on Tuesday against San Diego. … RHP Ian Anderson (right shoulder inflammation) was placed on the 10-day IL. He won’t throw for seven to 10 days and then will be evaluated. … INF Johan Camargo was optioned to Triple-A Gwinnett to clear a roster spot for Pederson.

Meadows, from Grayson High School in metro Atlanta, was playing before friends and family in his first major league game in his hometown.

“It was cool,” he said. “Being able to see them in the stands it was just a little adrenaline pump. You just want to do good, especially this being my first time playing here.”

The Braves lost right fielder Ronald Acuña for the remainder of the season with a torn ACL in his right knee on July 10 in a 5-4 win at Miami. Acuña had been the team’s leadoff hitter and right fielder.

The 29-year-old Pederson was batting .230 with 11 homers and 39 RBIs in 73 games with the Cubs. Snitker applauded general manager Alex Anthopoulos for completing the deal quickly.

“We had an injury and we addressed it right now, immediately,” Snitker said.