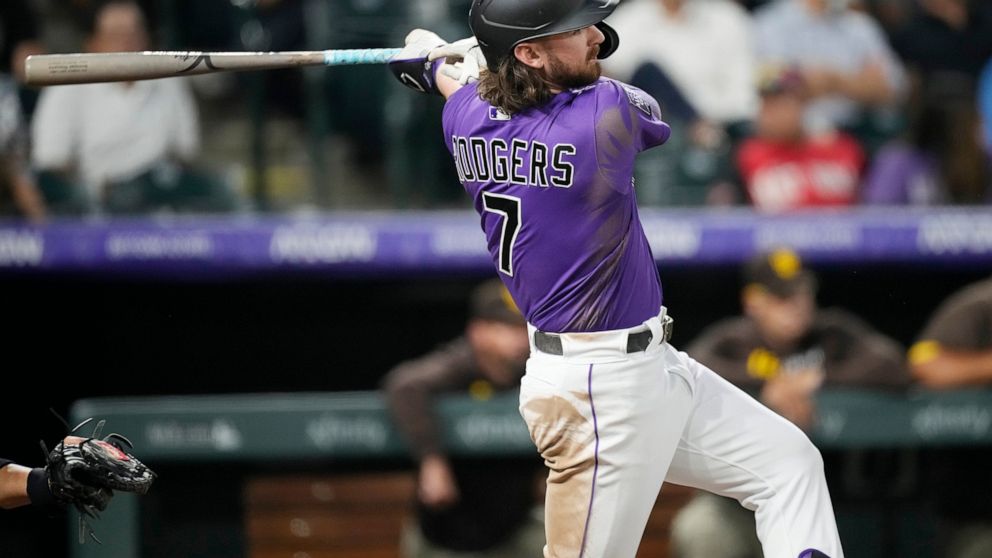 DENVER — Germán Márquez pitched into the seventh inning and helped himself with two hits and two RBIs as the Colorado Rockies overcame three home runs by San Diego and beat the Padres 7-3 on Tuesday night.

C.J. Cron and Charlie Blackmon homered for the Rockies.

The Padres got solo homers in the seventh inning from Fernando Tatis Jr., Tommy Pham and Jake Croneworth, who had an inside-the-park home run.

Leading 4-3 going into the bottom of the seventh, the Rockies’ Trevor Story drew a leadoff walk from Miguel Diaz. Tim Hill relieved and Blackmon connected for his ninth homer. Cron, who hit the game-winning homer in the ninth against San Diego on Monday, followed with another homer to extend Colorado’s advantage to four runs.

It was San Diego’s sixth loss in a row at Coors Field, and marked the second consecutive series loss to the Rockies. The Padres have not won at Coors Field since May 12, and they have lost six of their last seven on the road overall dating to Aug. 4.

Márquez (11-9) took a one-hitter into the seventh before Tatis hit a towering drive that soared well into the bleachers beyond the center field wall to start the inning, ending a shutout bid.

After Manny Machado flied out, Croneworth tagged a drive that banged off the right-center field wall, slipping past right fielder Blackmon before being run down by center fielder Sam Hilliard. By then, Croneworth had made it around the bases for an inside-the-park homer. Pham followed by homering into the left field bleachers, and Jhoulys Chacin relieved Marquez, retiring the next two batters to close out the inning.

Marquez went 6 1/3 innings and allowed three runs on five hits. He added an RBI single in the fourth and a run-scoring double in the sixth.

Blackmon had three RBIs, starting with a run-scoring fielder’s choice in the first inning off Matt Strahm (0-1).

Padres: RHP Chris Paddock, sidelined since July 28 with a left oblique strain, has steadily increased baseball activities and could soon begin throwing sessions off the mound. “He’s progressing,” manager Jayce Tingler said. “We think we’re really close to getting on a slope.”

Rockies: INF Alan Trejo was recalled from Triple-A Albuquerque to fill the roster spot of LHP Austin Gombert, who has been placed on the paternity list. RHP Chi Chi Gonzalez is set to come off the COVIDS-19 injured list to fill in for Gombert, who was scratched from his scheduled start Wednesday against San Diego.

Padres: RHP Jake Arrieta (5-11, 6.88 ERA) is set to make his first start for San Diego since being signed earlier this week following his release by the Chicago Cubs. A former NL Cy Young award winner who has struggled to quash the big inning at times this season, Arrieta bolsters a San Diego rotation that just recently lost RHP Yu Darvish to the injured list due to lower back tightness.

Rockies: RHP Chi Chi Gonzalez (3-6, 6.06 ERA) steps into the rotation spot of LHP Austin Gomber, who has been placed on the paternity list. Gonzalez is returning from the COVID-19 injured list to make his 16th start of the season and sixth at home. He last pitched July 23, when he received a no-decision in Colorado’s 9-6 win over the Los Angeles Dodgers. The Rockies are expected to limit Gonzalez to between 75 and 90 pitches.