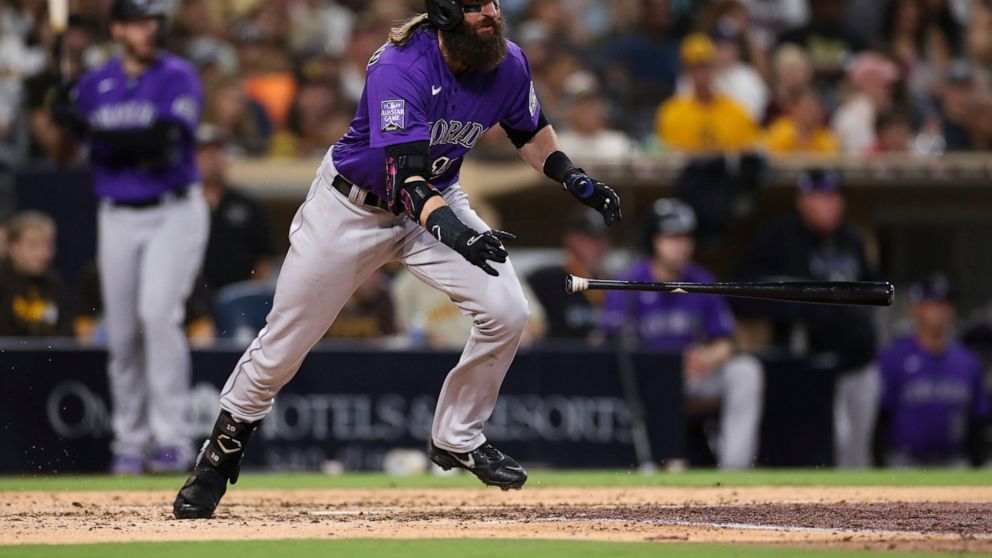 “My fastball was good today. My two-seam was working well today and that was the key,” said Marquez, who added right now he’s pitching the best he ever has in his career. “I have spent a lot of time on my delivery.”

Colorado is a major league-worst 8-34 on the road. The Rockies are 2-3 on their current swing, the first time they’ve won more than one game on a trip this season.

“That was a really good outing against a good team at a packed house at Petco,” Rockies manager Bud Black said. “This was a good one (win). German put the team on his back tonight.”

The Rockies had lost nine in a row at Petco Park before Marquez (8-6) took over.

“German’s breaking ball was pretty consistent all night. But he got outs with every pitch. The fastball had good life and movement,” Black said. “He has a presence and poise with being a pitcher in his fifth year….When it gets hot he is able to handle it.”

Marquez struck out nine and threw an economical 86 pitches, 58 for strikes. The Padres had only one runner reach as far as second base against him — Eric Hosmer doubled in the second.

“Marquez got in a pretty good grove,” Padres manager Jayce Tingler said. “We weren’t able to string enough hits together. … We couldn’t get his pitch count up either, to get him out early.”

Prior to the Padres batting the fourth, it was announced over the public address system that third baseman Manny Machado had been added to the NL All-Star team, eliciting a huge cheer and chants of “Manny” from the crowd and prompting his teammates to mob him in the dugout. Machado replaced the injured Ronald Acuña Jr. of the Atlanta Braves on the NL squad.

“Honestly, it is a great honor,” he said. “To be able to go there with the San Diego Padres for the first time with my teammates we have here, it is an exciting moment.”

“Obviously, it is an unfortunate situation with someone going down with a terrible injury,” he said.

With San Diego trailing 3-0 in the eighth, Hosmer doubled to lead off against reliever Carlos Estevez and Victor Caratini singled him to third with one out. But the Padres couldn’t do any more damage, and Daniel Bard pitched a scoreless ninth to earn his 13th save.

Padres starter Joe Musgrove (5-7) was cruising until the fifth inning when he loaded the bases with one out and surrendered a two-run single to Charlie Blackmon that skipped under the glove of a diving Hosmer at first base. Hosmer committed a fielding error earlier in the inning leading to an unearned run.

While the Padres’ bats were silent, San Diego make some sparkling plays with their gloves.

Left fielder Tommy Pham made a diving catch to take away a hit from Garrett Hampson, second baseman Jake Cronenworth made a nice stop to rob Blackmon and center fielder Trent Grisham charged full speed to make a spectacular diving catch to steal a hit from Colorado’s Dom Nunez.

“I got a lot of help from my teammates early on. They made some really nice plays in the first inning,” Musgrove said. “Hosmer makes that play (Blackmon’s hit) nine out of 10 times. I know he is thinking about that.”

Rockies: 1B Matt Adams (elbow) was activated from the from the 10-day injured list. … LHP Austin Gomber (left forearm tightness), who is on the 10-day IL, threw in a simulated game at Petco Park. He threw around 35 pitches over two innings. He is scheduled to throw a session on July 14 in Denver and could be headed toward a rehab assignment as early as July 16.

Padres: LHP Matt Strahm (right patellar tendon surgery) pitched a simulated inning at Petco Park. He rejoined the team in June and has been throwing regular bullpen sessions. The next step would be a rehab assignment, an Tingler said a late-July return is “very realistic.” Strahm hasn’t pitched at all this season. … C Austin Nola (left knee sprain), who landed on the IL in late May, was sent on a rehab assignment with Triple-A El Paso beginning on Friday.