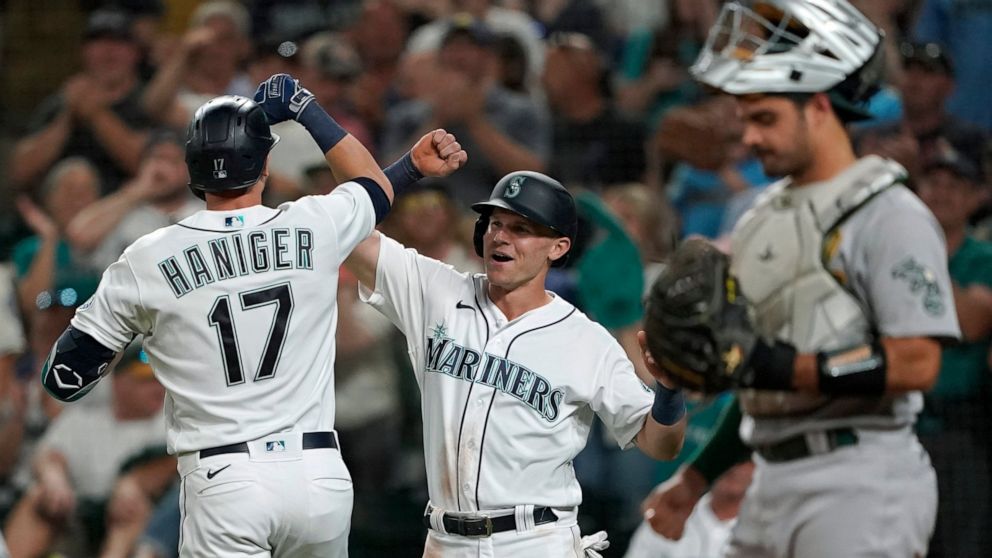 Pinch-runner Donovan Walton scored the winning run on a Lou Trivino’s wild pitch in the bottom of the ninth, Mitch Haniger homered twice and the Seattle Mariners beat the Oakland Athletics 5-4

SEATTLE — Pinch-runner Donovan Walton scored the winning run on a Lou Trivino’s wild pitch in the bottom of the ninth, Mitch Haniger homered twice and the Seattle Mariners beat the Oakland Athletics 5-4 on Saturday night.

It was the second game in a row Seattle has won on a wild pitch after Dylan Moore scored from second on Friday night on two consecutive wild pitches to give the Mariners a 4-3 win. They are a major league-best 22-8 in one-run games this season and have won eight of their last 12.

Trivino (3-4) gave up a single to Luis Torrens to start the ninth. Torrens, a catcher, exited for Walton. Trivino walked two of the next three batters to load the bases. Kendall Graveman (3-0) pitched the ninth for the win.

Haniger staked the Mariners to a 4-3 lead in the fifth with his third multi-homer game of the season. He’s one of six players in baseball with 10 or more games with multiple extra-base hits.

He doubled off the left-center wall in the first and hit a solo homer to the same spot in the third where Ramon Laureano pounded his glove into the top of the wall after having a fan who was out of play pull the ball out of his mitt.

Haniger added his 25th homer in the fifth with Ty France aboard for a 4-3 lead. He’s now reached base safely in 22 of 23 games with nine homers and 21 RBIs over that span.

He was at the plate when Trivino launched his wild pitch.

France put the Mariners up 1-0 in the first, scoring Haniger from second with an RBI single. But the Athletics rallied in the third on an RBI single from Tony Kemp and a two-run single from Jed Lowrie for a 3-1 lead against promising rookie right-hander Logan Gilbert.

Catcher Aramis Garcia, starting for banged up Sean Murphy, erased the rally in the seventh with a solo homer off reliever Drew Steckenrider that bent around the right-field pole just over the wall and tied it at 4-all.

Athletics: Murphy usually catches Bassitt, but manager Bob Melvin gave him the day off after he fouled balls off his calf and ankle and was hit by a pitch in Friday night’s 4-3 loss to the Mariners. He also blocked and chased a number of wild pitches. “He’s a little banged up,” Melvin said.

Mariners: LHP Marco Gonzales (2-5, 5.69) is looking for his second win in a row in the series finale.