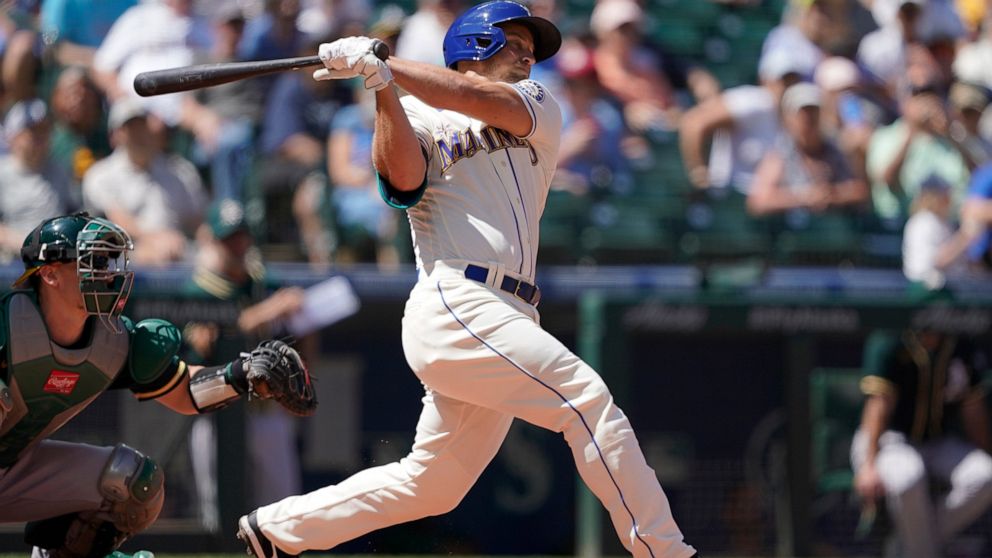 Kyle Seager had a key two-out, two-run single as part of Seattle’s four-run third inning, Marco Gonzales won his second straight decision, and the Mariners inched closer in the American League wild-card chase with a 4-3 win over the Oakland Athletics

SEATTLE — Kyle Seager hit a two-out, two-run single as part of Seattle’s four-run third inning, Marco Gonzales won his second straight decision, and the Mariners inched closer in the American League wild-card chase with a 4-3 win over the Oakland Athletics on Sunday.

Seattle took three of four in the series and pulled within 1½ games of the A’s for the second wild card in the AL, perhaps setting up the Mariners to be buyers rather than sellers ahead of the trade deadline.

The Mariners did all their offensive damage in the third inning against Oakland starter Cole Irvin, scoring four times with two outs. Gonzales (3-5) and four relievers made the early offense hold up, allowing one run and three hits over the final six innings.

Gonzales allowed two runs and five hits in 5 2/3 innings. He struck out four and threw a season-high 105 pitches. JT Chargois, Casey Sadler and Anthony Misiewicz combined to allow one run and one hit in 2 1/3 innings of relief. Seth Brown’s pinch-hit solo homer off Sadler was the only damage.

Seattle’s Drew Steckenrider got some defensive help in the ninth when left fielder Jake Bauers threw out Matt Chapman trying to go from first to third on Mitch Moreland’s single for the second out. Steckenrider got a popout from Brown to finish his third save.

Seattle’s four-run outburst started innocently on J.P. Crawford’s single. Mitch Haniger walked and Ty France was hit by a pitch for the 16th time this season, tied for the most in the American League.

Seager jumped on the first pitch from Irvin (7-9), hitting it into right field to score Crawford and Haniger. Luis Torrens followed with a hard grounder to score France, and Tom Murphy capped the rally when his blooper to center dropped despite Ramon Laureano’s diving attempt.

Matt Olson hit his 27th homer and Stephen Piscotty had an RBI double for the A’s.

Irvin’s four-inning start was his shortest of the season. He allowed five hits and four runs and struck out three.

Irvin pitched at least five innings in each of his previous nine starts, and the last time he failed to make it through five came on May 25 against Seattle. That day, Irvin allowed 10 hits and four runs in a 4-3 loss, and afterward said, “A team like that shouldn’t be putting up 10 hits against me or anyone.”

Seattle recalled RHP Ryan Weber from Triple-A Tacoma for additional depth in the bullpen. Weber was claimed off waivers by Seattle after being designated for assignment by Milwaukee earlier this month.

Seattle optioned IF Donovan Walton to clear the roster spot.

Athletics: After an off day, Oakland will open a two-game series in San Diego on Tuesday. RHP James Kaprielian (5-3, 2.65 ERA) will start the opener for the A’s. Kaprielian has allowed two earned runs or fewer in nine of his 12 starts.