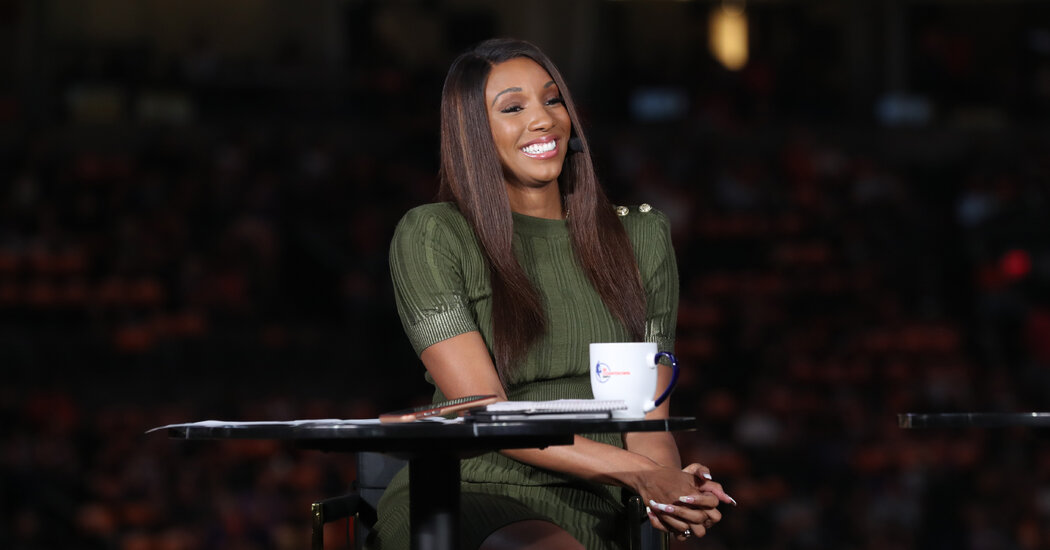 On Tuesday, she hosted the N.B.A. finals for ESPN. The next day she was gone.

ESPN announced on Wednesday that Maria Taylor, one of the network’s high-profile talents, had left the company.

In an unusually terse news release, Jimmy Pitaro, the chairman of ESPN, acknowledged that Taylor “chose to pursue a new opportunity,” but said that he was “proud of the work we’ve done together.”

The departure had been expected since early this month, when The New York Times reported on disparaging comments made about Taylor by one of her colleagues at ESPN, Rachel Nichols. In a conversation with an adviser to LeBron James that Nichols was unaware was being recorded, Nichols, who is white, said that Taylor, who is Black, had gotten the role of hosting the N.B.A. finals instead of her because ESPN executives were “feeling pressure” on diversity.

The comments, which were made a year ago, festered within ESPN throughout the pro basketball season and caused tension among employees who cover the N.B.A., before boiling over in May. On the first day of the playoffs, Taylor, along with her “NBA Countdown” on-air colleagues, Jalen Rose, Jay Williams and Adrian Wojnarowski, considered boycotting the show in response to a directive from ESPN executives that they believed benefited Nichols.

Some N.B.A. players weighed in on social media, and Adam Silver, the commissioner of the N.B.A., was frustrated with how ESPN had handled the situation, saying he thought “ESPN would have found a way to be able to work through it. Obviously not.”

Last week, Pitaro sent a memo to staff that emphasized Taylor was selected to host “NBA Countdown” for the finals on merit alone, and said a future town-hall-style meeting would address issues of diversity and inclusion.

Taylor’s contract situation loomed over the finals. Negotiated years ago, the plan was for the deal to expire during the off-seasons of the N.B.A. and college football — the two main sports she covered for ESPN. The N.B.A. finals were held later than normal because of the coronavirus, putting ESPN in a bind.

Taylor’s contract expired on Tuesday, the day the Milwaukee Bucks clinched the N.B.A. championship in Game 6. Executives had feared the situation becoming messier if they had to replace Taylor for Game 7.

But they were able to work out a deal for Taylor to stay with the company through the end of the finals, and ESPN executives continued trying to re-sign her to a long-term contract until quite recently.

No new destination for Taylor was announced, but she is close to signing an agreement with NBC, according to two people familiar with the negotiations who were not authorized to speak about them publicly. At NBC, Taylor could become the studio host for the N.F.L. pregame show “Football Night in America” and the Super Bowl when it is the network’s turn to broadcast it. The Olympics, tennis and horse racing would also be options at NBC.

At minimum, the company will have to choose a new host for “NBA Countdown,” its pregame and halftime show, which has changed personnel over the years in an ineffective attempt to catch up with TNT’s widely lauded “Inside the N.B.A.,” or even its own “College GameDay.” It might also have to figure out a new production structure: Just before the season began, in late 2020, the senior producer who ran “NBA Countdown” left ESPN and a vice president above her was laid off.

ESPN also has to decide whether to return Nichols to her role as the main sideline reporter for N.B.A. games next season. She was replaced during the N.B.A. finals by Malika Andrews, who previously worked at The Times.

Taylor’s departure leaves a void in other areas for ESPN. She is also an analyst on “College GameDay,” the sideline reporter for the college football national championship game and hosts coverage of the women’s college basketball tournament and the N.F.L. draft.