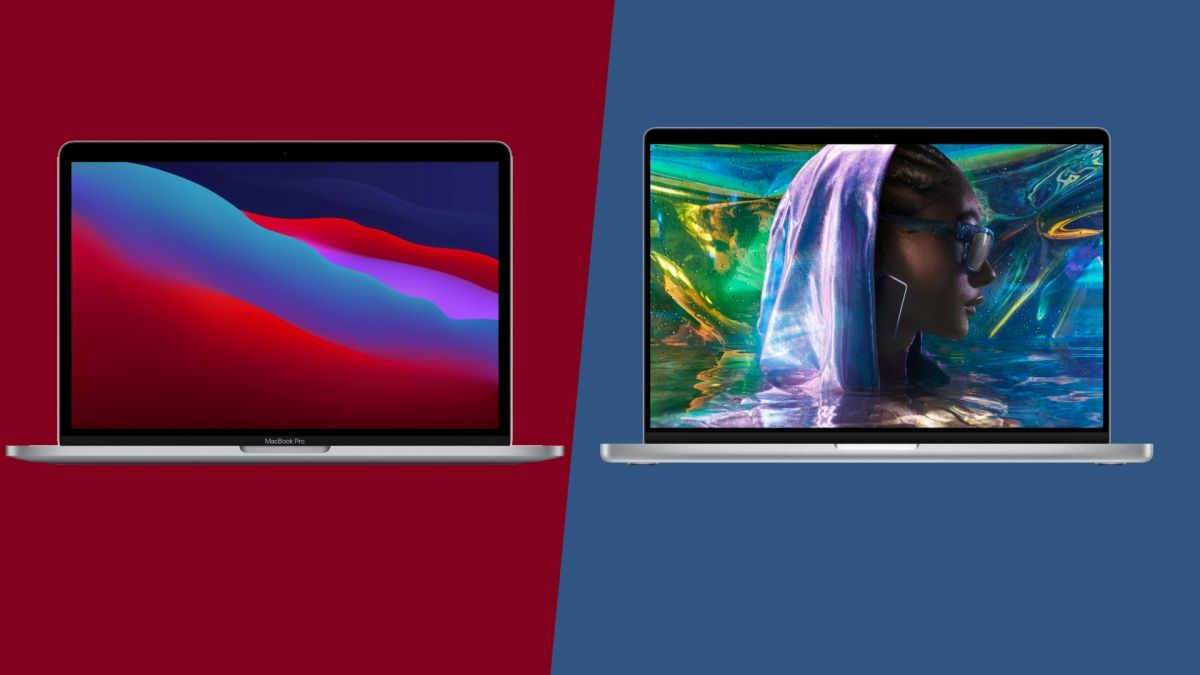 With the recent release of the MacBook Pro 14-inch (2021), you might have some questions regarding just how that stacks up against the MacBook Pro 13-inch (2020). Whether you already own the latter and you’re getting some serious FOMO, or don’t currently own a MacBook Pro laptop, there are a few key differences that could sway you in favor of either device.

Apple is well known for making some of the best laptops on the market, especially for creatives and working professionals. From their design, the attached Apple ecosystem and running macOS, it’s pretty difficult to start using a Windows based device if you’ve already been sucked into using a MacBook or iMac previously.

And of course, both of these options have ditched the Intel processors used by their predecessors and are now powered by Apple’s very own silicon. We made previous comparisons for the MacBook Pro 16-inch (2019) vs MacBook Pro 16-inch (2021) to see how Apple silicon fares against well-established intel offerings, but this is the first time we’ve had the opportunity to stack different generations of the M1 chip against each other.

Things do get a little complex however, as last year’s 13-inch MacBook Pro only offers the original M1 SoC (system-on-a-chip), while the freshly announced MacBook Pro 14-inch (and 16-inch model) have a choice between two new chips, the M1 Pro and the beefier M1 Max.

It might be difficult to  get out of the ‘more power is better’ mindset, but there are advantages to opting to buy last year’s offering, especially with season events like the Black Friday sale coming up.

We’ve laid out the specifications for you to compare, and on paper, it’s fairly easy to see which is the ‘better’ device. The new MacBook Pro 14-inch has more configurations to choose from, allowing users to better optimize the laptop their needs – after all, paying for a device that’s too powerful for your needs is a waste of money.

Along that line of thinking, the older M1-powered MacBook Pro 13-inch laptop shouldn’t be completely discounted. There are sacrifices you’ll need to make when using one, but it’s still plenty powerful enough to deal with most tasks, and now that it’s considered an ‘outdated’ model you’ll be more likely to find one at a discounted rate.

The MacBook Pro 14-inch has a choice of either of the new M1 chips, but opting for the more powerful M1 Max will leave your wallet significantly lighter. If you need to decide which of the new Apple silicon chipsets will best suit your needs, we stacked them against each other in an M1 Pro vs M1 Max comparison. Until we get our hands on both versions though, we’re relying on the prediction performance that Apple has provided, so you might want to hold off until some official reviews and benchmarks between the two appear.

The older M1 MacBook Pro-13-inch still fares better than many Windows-based laptops even despite its underpowered hardware when compared to both of its larger, newer siblings though, so if you’re a student or working professional simply looking for a macOS device with a little more juice than the M1 MacBook Air (2020), it’s still a worthwhile purchase.

When comparing the design of the Apple MacBook Pro 13-inch (2020) vs MacBook Pro 14-inch (2021), there are more differences than similarities thanks to the newer model getting a full design refresh that corrected many of the criticisms Apple fans have voiced over previous years.

The chassis of both laptops are very similar, but if you squint then you’ll see that the older 13-inch MacBook Pro has a slimmer build with sloped edges and a flat base, while the newer 14-inch MacBook Pro is a smidge thicker (presumably to contain beefier hardware), straight edges and small feet on the underside.

Both are modern and professional, but while the MacBook Pro-13-inch model retains features like the divisive Touch Bar and an outdated 720p webcam, the new MacBook Air Pro 14-inch offering has completely done away with the Touch Bar and upgraded the camera to a gorgeous 1080p version with improved sensors.

Ports are a similar issue. The 13-inch model from last year only has two Thunderbolt 3 ports alongside a standard audio jack, which forces users who needed additional peripherals or displays to use a dongle, despite Apple previously having useful features like HDMI and SD card readers built into much older models.

The MacBook Pro 14-inch (2021), meanwhile, features three Thunderbolt 4 ports, an HDMI port, an SDXC card slot, and a MagSafe 3 port, going back to its roots to the joy of creatives everywhere.

The display on the MacBook Pro 13-inch (2020) features a 2560 x 1600 resolution, 500 nits brightness, P3 wide color support and True Tone. This was already pretty impressive last year, but with the MacBook Pro range targeting the creative market, there were some improvements to be made.

A trade-off for some users however is that Apple has introduced a webcam notch, similar to what we see on the current generation of iPhones. It’s been stated that this won’t impact fullscreen viewing or using creative applications as the display has additional pixels to work around it, but we won’t know for sure until we’ve managed to test it ourselves.

In our review of the MacBook Pro 13-inch (2020), we measured its battery life at 13 hours and 22 minutes of continuous 1080p video playback. That’s more than enough to get you through an entire day’s work, but results will vary across what applications you’re running.

As we haven’t been able to run the MacBook Pro 14-inch (2021) through the same battery life tests yet, we only have what Apple is claiming, which is a 17-hour battery life. That’s a pretty remarkable increase, and the benefits don’t stop there. We also heard during the Apple unleashed event that the MacBook Pro 14-inch (2021) would finally feature FastCharge technology with the reintroduction of MagSafe 3 that can replenish 50% of battery capacity in 30 minutes

Again, this is another claim we’ll have to test when we finally get our hands on one to test, but MagSafe3 will at least help mitigate any damages caused by you, your pets or children tripping on the cable.

It’s clear on paper that the freshly released 14-inch MacBook Pro (2021) has many advantages over the slightly older and less powerful MacBook Pro 13-inch (2020), but price is not among them.

For most users, not only will the M1 MacBook Air 13-inch (2020) be more than enough to meet their needs, but it’ll cost significantly less. This will be a personal decision but remember not to spend cash unnecessarily just to have the ‘best’ MacBook out there. Your wallet won’t care about clout after all.