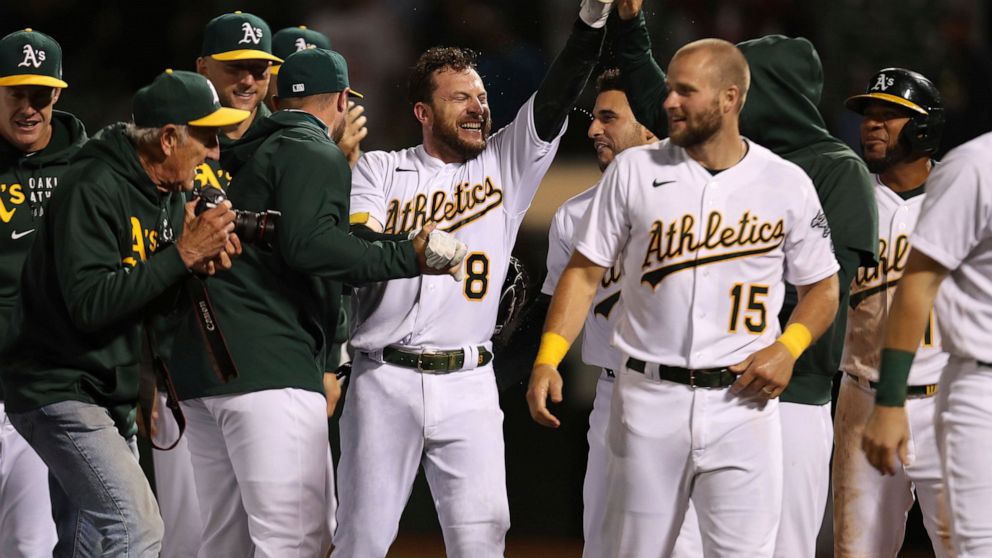 Jed Lowrie hit a game-ending, two-run homer in the bottom of the ninth inning to rally the Oakland Athletics past the Cleveland Indians 5-4

OAKLAND, Calif. — Jed Lowrie hit a game-ending, two-run homer in the bottom of the ninth inning to rally the Oakland Athletics past the Cleveland Indians 5-4 on Friday night.

It appeared the Indians were in line for a comeback win themselves after erasing a 3-0 deficit. But then Lowrie drilled a 1-1 pitch over the right field wall off Emmanuel Clase (3-5) with one out, after Elvis Andrus led off the ninth with a single.

Bradley Zimmer hit a go-ahead homer in the seventh for Cleveland, which had its three-game winning streak snapped. Roberto Perez also went deep for the Indians.

Injuries limited him to just nine games with the New York Mets over the past two seasons. But he signed with Oakland on a minor league deal this spring, and his 45 RBIs are second on the team.

“I’m not going to put words on it yet because it’s not over,” Lowrie said of his season. “But I’m grateful for the opportunity for where I’m at right now.”

Mitch Moreland homered for Oakland in his first game back from the injured list. Matt Olson and Andrus each had three hits, but the A’s were mostly held silent at the plate after building an early 3-0 lead.

Sergio Romo (2-0) struck out two in a scoreless ninth to earn the win.

Zimmer, hitting ninth in Cleveland’s lineup, hadn’t homered since July 28 of last season. But he got an 0-1 changeup from Yusmeiro Petit and drilled it over the center field wall to snap a 3-all tie in the seventh.

Clase entered the night having allowed just one homer in 36 2/3 innings this season.

“It hurts, but I’ll take our chances when we have a lead going into the ninth,” Cleveland manager Terry Francona said.

A’s starter Sean Manaea, who hasn’t won since June 14, was charged with three runs over 5 1/3 innings.

Along with his three hits, Andrus made an outstanding play at shortstop in the third, a backhanded diving catch of Cesar Hernandez’s liner and throw to second to double off Zimmer. That bailed Manaea out of a potential jam.

“I was sure it was going to be a hit,” Manaea said. “It was crazy, and then he just acts so casual with the throw to second.”

Indians: OF Jordan Luplow, working back from a sprained left ankle, will continue his progression of minor league rehab assignments by joining Triple-A Columbus on Monday “if all goes well,” Francona said.

Athletics: OF Mark Canha went through an on-field workout and both manager Bob Melvin and Canha were optimistic he’ll be able to come off the injured list this weekend. He’s dealing with inflammation in both hips. … The A’s reinstated Moreland from the injured list and designated 1B/DH Frank Schwindel for assignment. Moreland went on the IL on July 4. … RHP Chris Bassitt, who pitched in relief during Tuesday night’s All-Star Game, is likely to start Sunday’s series finale.