‘Lord, Hear Me’: Residents in Florida Condos Fear They Could be Next 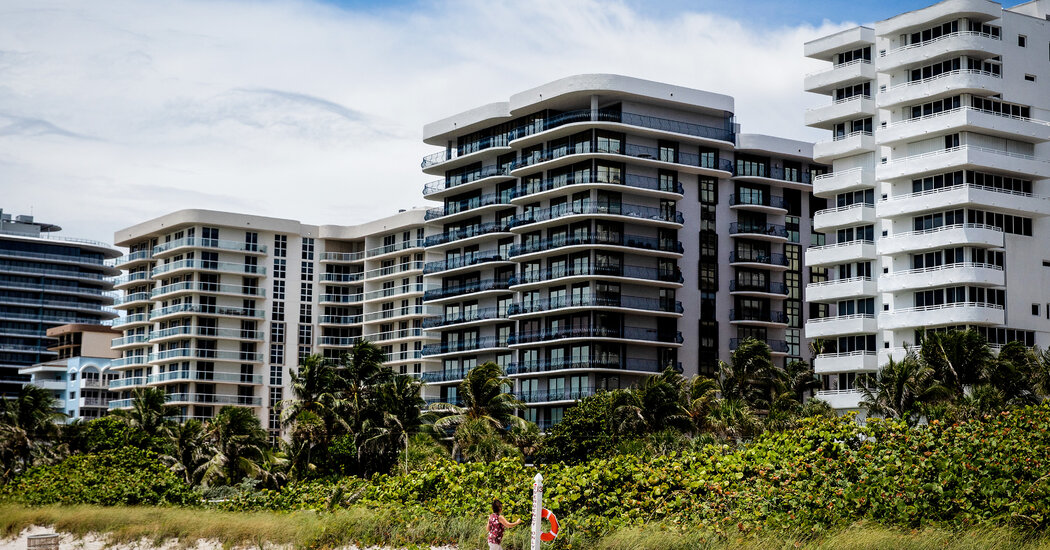 BAL HARBOUR, Fla. — The condo complex at the exclusive address of Bal Harbour 101 in South Florida feels more like a luxury hotel than somebody’s home. At the entrance, residents are greeted by a marble fountain and a valet. Inside is a private restaurant. The balconies upstairs offer panoramic ocean views.

But in the days since the collapse of the Champlain Towers South condominium complex in the neighboring town of Surfside, the residents at Bal Harbour 101 are increasingly worried that their idyllic complex could also be at risk. An engineering inspector recently recorded cracks, water penetration, spalling (flaking of concrete) and corrosion — some of them problems inspectors had also documented at Champlain Towers before the collapse there. Bal Harbour 101 now faces the need for $4.5 million or more in repairs.

“We’re getting calls from everywhere, including from people who live here,” said the complex’s manager, Igor Bond, who said he was working with “a big group of inspectors” to help reassure residents that there was nothing to fear.

The Champlain Towers collapse has brought rattling uncertainty to the long line of high-rise residences that abut the South Florida coastline.

At Crestview Towers in North Miami Beach, seven miles from the collapse in Surfside, residents had just hours to go in and recover their belongings on Friday, a week after an evacuation was ordered to make way for long-delayed repairs. A second condominium in the city also evacuated its residents last week, while a private engineering firm warned officials of dangerous conditions in a condominium in Kissimmee, south of Orlando.

“The likelihood of other buildings like Champlain or Crestview is pretty high,” said Michael Joseph, a city commissioner at North Miami Beach.

The problem was not only with residences: Miami-Dade County officials on Friday announced the full evacuation of the old Dade County Courthouse after an engineering survey identified safety concerns that warranted an immediate closure of the upper floors.

Officials in Surfside were pressing building owners to undertake extensive reviews of their structures. Allyn Kilsheimer, the forensic engineer hired to investigate the collapse, said on Friday that he had provided the town with more than two dozen recommendations on how to ensure the safety of other buildings, starting with hiring a structural and geotechnical engineer to examine each applicable structure.

Foundations should be assessed to ensure that construction matched the original designs, Mr. Kilsheimer said in his memo. He also recommended the use of ground-penetrating radar to analyze each building’s steel reinforcement and the thickness of concrete slabs. Concrete cores should be extracted and tested for strength, the memo said.

Mayor Charles W. Burkett sent the recommendations to oceanfront buildings — those east of Collins Avenue in Surfside — saying the proposals were intended to afford residents peace of mind until the forensic investigation into the collapse is complete.

“The recommendations described in the memorandum should be undertaken for all buildings east of Collins regardless of their age,” the mayor wrote.

Surfside’s vice mayor, Tina Paul, said that “three or four” other condominiums, besides those at Champlain Towers, had contacted the city over safety concerns.

“People need to use their judgment because there were just so many issues with that building besides construction,” Ms. Paul said. “It was poorly maintained. From my knowledge, there’s more to the cause than just the issue of building maintenance — although that didn’t help.”

The uncertainty has disrupted many families beyond those already suffering from the catastrophic collapse, which left at least 86 people dead and dozens more still unaccounted for. Mr. Joseph said North Miami Beach was placing residents displaced from the Crestview complex into temporary housing until the building becomes inhabitable again.

City officials offered no prediction as to how long that might be. Margarita Bulgakov, whose mother and grandmother lived in the Crestview building, was pushing a wheelchair on Friday that was filled with bags of their clothing and was preparing to load them into her car. She said her mother had not been aware of the building’s maintenance problems before the evacuation.

“We had no idea it was going to be their building,” she said. “I mean, they had moved in just a couple months ago.”

The Bal Harbour 101 complex, built in 1978, three years earlier than the Champlain tower, had long promised dwellers a refuge several miles from the commotion and chaos in Miami.

But last week there was mounting anxiety, frustration and anger over how little owners knew of the issues that had come up during the building’s technical recertification.

An engineering inspector noted in a written report to the condo board on July 2 that the pool’s pump room and deck had concrete spalling and corrosion. The inspector recorded cracks, and signs of water penetration, in the pool area. The building, he wrote, was in good condition but needed repairs.

Neither Mr. Bond nor members of the condo board responded to requests for comment about the newly disclosed cost estimate for restoration.

Though the building was required to undergo a recertification process when it reached 40 years of age, around 2018, public records show that the village did not certify that the high-rise was in compliance until a week after the Champlain Towers South collapse.

The consulting engineer told the board on July 2 that while the building was “safe for continued use,” it needed additional waterproofing on the garage deck and concrete repairs on the pool deck.

Amy Benishai, who bought a unit and moved to Bal Harbour 101 in 2014 with her husband, Jack, said they had remodeled their unit, thinking it looked shabby, shortly after moving in. The structural integrity of the building never crossed her mind, she said, but she now believes that it should have.

“I love living here, and I love the people in this building,” Ms. Benishai said. “But I’m concerned.”

Now she is left wondering how safe it is to stay. Ms. Benishai, who is Jewish, said she had been repeating the same prayer every night.

“Lord, hear me: May I go to sleep and be protected,” she said. “I’m just hoping that I can wake up the next morning.”

“I trust that everything is getting done,” Miriam Desjardins, a Bal Harbour 101 resident for 18 years, said before adding, “Safety only comes from God.”

At the condominium’s board of directors meeting on Wednesday, association leaders revealed that it would cost an estimated $4.5 million to make all the needed restoration.

The building management blamed the delay in making those repairs on a lack of availability of government building inspectors and construction workers during Covid-19 lockdowns.

But the meeting, which lasted for two hours, quickly dissolved into chaos as condo board members and other residents argued back and forth.

“The idea that I could come to you, with any suggestions, is nonsense!” one resident yelled at the board.

Another resident told a board member that he should resign; some lamented that the attention drawn to their building had become a “public relations nightmare” that could affect property values.

Talk of repairs turned to further complaints over pipes and parking, and in the end, the board members said they were doing the best they could.

“We are not experts,” one said. “We are volunteers.”