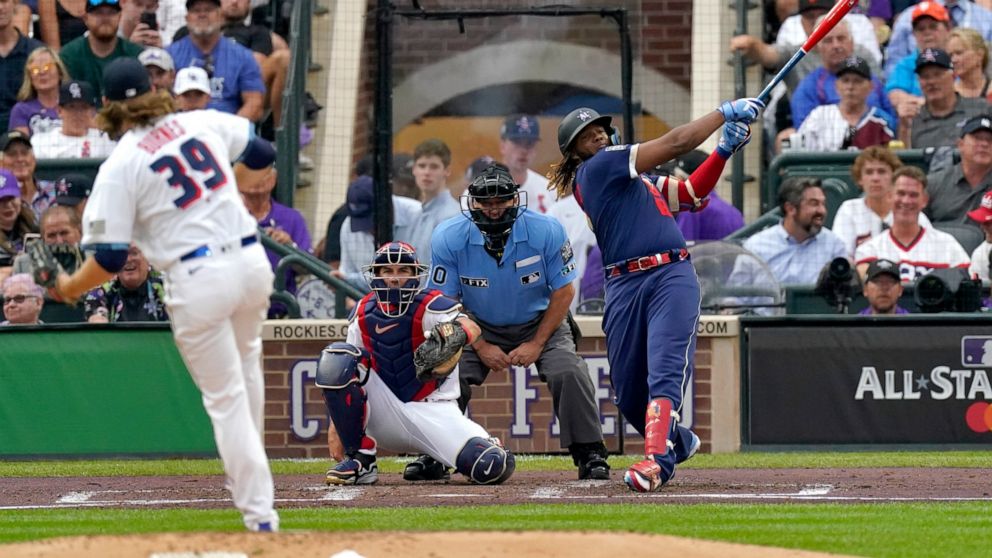 Vladimir Guerrero Jr. admired his 468-foot screamer for a moment before bouncing into his triumphant home run trot

DENVER — Vladimir Guerrero Jr. admired his 468-foot screamer for a moment before bouncing into his triumphant home run trot.

Quick out of the park, slow out of the box, Guerrero became the youngest All-Star Game MVP after driving in a pair of runs in the American League’s 5-2 win Tuesday night.

“Dad, this is for you,” Guerrero said in Spanish when he was presented with the Ted Williams All-Star Game MVP award.

He kissed the trophy — a clear baseball bat — held it up high and posed with it at home plate, soaking in the accomplishment, much as he did admiring his monster home run from the batter’s box two hours earlier.

Guerrero crushed a slider from Milwaukee’s Corbin Burnes in the third inning that almost cleared the left field bleachers at cavernous Coors Field and gave the AL a 2-0 lead.

NL shortstop Fernando Tatis Jr. immediately put his glove on his head and slowly turned around to watch the ball leave the yard.

“Wow,” Tatis said. “It was a moonshot. It was something impressive. He’s been doing it all year. Why not show it off here?”

Tatis was mic’d up for the third inning and he marveled at the drive, saying, “That was a bomb. … He should have admired it a little bit more. It’s the All-Star Game, boy. Have fun.”

Guerrero rocketed a comebacker near NL starter Max Scherzer in the first inning, just missing the three-time Cy Young Award winner. After he was thrown out at first, Guerrero jogged through the infield and offered Scherzer a bear hug.

“Basically at the Home Run Derby yesterday we had a conversation and he said ‘Hey take it easy on me tomorrow.’ That’s what he told me and after the line drive I just wanted to give him a hug,” Guerrero said.

He wasn’t as generous with Burnes. His homer was the longest at the All-Star Game since Statcast began tracking in 2015.

And it’s the longest by an astounding 58 feet. The previous best was Kris Bryant’s 410-foot shot in 2016. It was also the 200th homer in All-Star history.

“Ever since I was a kid, I’ve been thinking about this moment,” said Guerrero, who also had a run-scoring groundout in the fifth that made it 3-0. “All my life I’ve worked hard and thank God it’s happening right now.”

Asked about 45 minutes after the game if he’d heard from his father, Guerrero said, “I haven’t checked my phone yet.”

It was surely blowing up, just like his big homer on baseball’s ultimate launching pad.