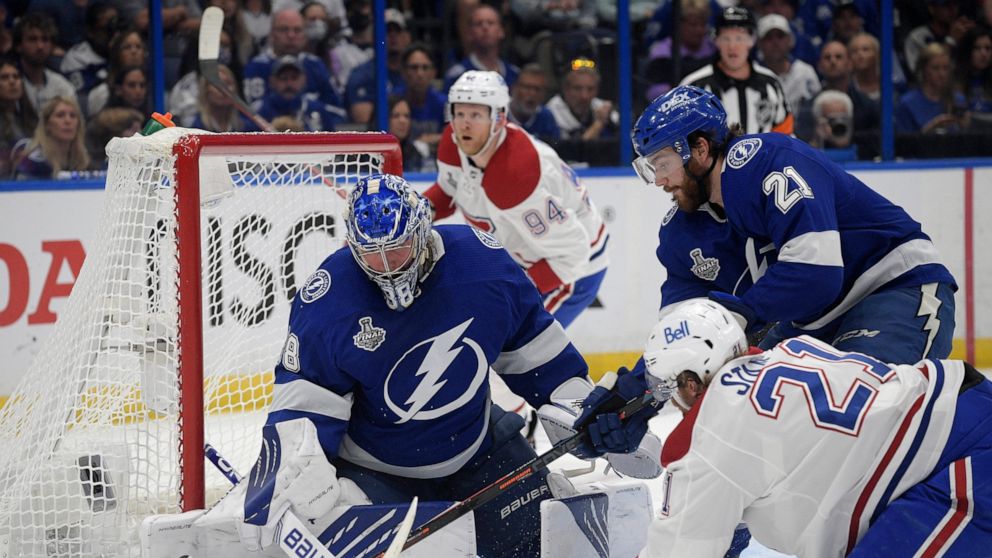 TAMPA, Fla. — Montreal Canadiens goaltender Carey Price stopped all 13 shots the Tampa Bay Lightning put on net to keep the score 0-0 on Wednesday night after the first period of Game 5 of the Stanley Cup Final.

The defending champion Lightning outshot the Canadiens 13-4 in a dominant start to their second opportunity to wrap up the series and win the Cup for the second time in 10 months. But they couldn’t crack Price, who seems to have found his groove in the final after a rough first three games.

Tampa Bay had its fair share of chances. Playoff leading goal-scorer Brayden Point fumbled the puck at the edge of the crease, Nikita Kucherov shot it into Price from point-blank range and Tyler Johnson rang a shot off the crossbar.

Defenseman Ryan McDonagh continued his strong play, passing the puck from a prone position on the ice and creating offense while shorthanded. Forward Blake Coleman, a pending free agent who’s likely playing his final series with the Lightning, had a dominant first period on the forecheck, frazzling the Canadiens and drawing a penalty.

With injured forward Alex Killorn missing his fourth consecutive game, the Lightning got 3:24 of power-play time and came up empty despite moving the puck around the offensive zone with ease. Montreal’s penalty kill is now 12 of 14 in the series.

At the other end of the ice, Lightning goaltender Andrei Vasilevskiy made four saves and sticked away the puck from a danger area with the Canadiens buzzing. Vasilevskiy has not lost back-to-back games all playoffs and has posted shutouts in each of Tampa Bay’s first three series-clinching victories.